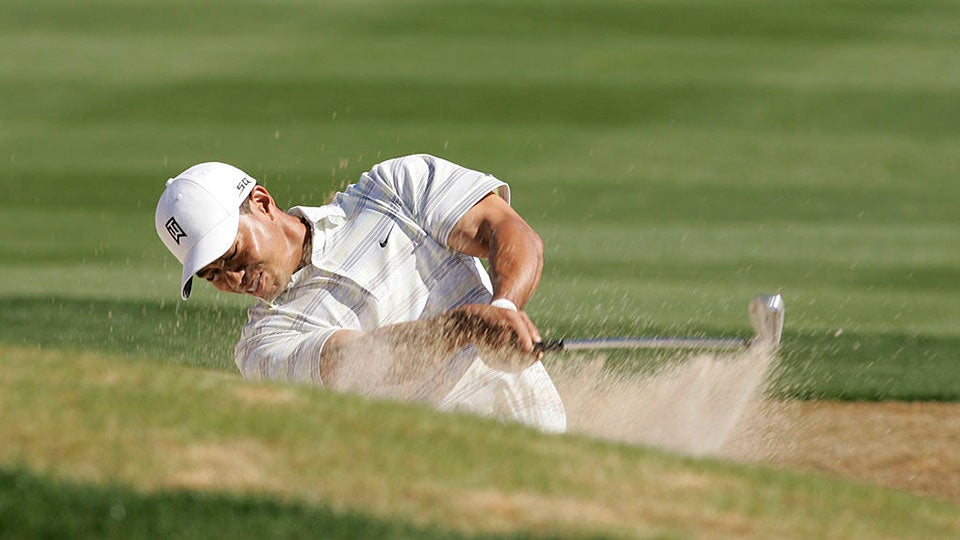 Tiger Woods during the first round matches of the WGC-Accenture Match Play Championship held at The Gallery at Dove Mountain in Tucson, Arizona, on February 21, 2007.
© Chris Condon/PGA TOUR

It was The Streak that wasn’t a streak.

And had Tiger Woods pulled it off and broken what is viewed as one of golf’s most cherished and unassailable records, he would’ve been the first to stamp an asterisk on it.

Woods went on a tear at the end of the 2006 season that carried into 2007, winning in seven consecutive PGA Tour appearances. He was within reach of Byron Nelson’s historic 1945 mark of 11 consecutive victories, an incredible achievement on its own. Nelson’s mark is considered the most unlikely golf record to be matched, just like Joe DiMaggio’s 56-game hitting streak is thought to be baseball’s impossible dream.

Except in February of 2007, Woods had Nelson in his sights … sort of. Here’s where the asterisk comes on. Woods went off the ranch to play overseas and failed to win in four appearances in the middle of his streak, losing in England, China, Japan and Dubai.

So was he chasing history or wasn’t he? For American fans, who don’t believe golf exists beyond the PGA Tour, yes. For international fans and the media, who correctly believe that Americans don’t give tournaments and tours outside the U.S. the proper respect, absolutely not.

Even Woods shot down the talk, although he may have been doing it to deflect the pressure.

“It’s a PGA Tour streak,” Woods said. “I play all around the world. I lost to Shaun Micheel (in England), I lost the Ryder Cup, I lost in China and I lost in Japan. There are some L’s in there. They are not all W’s.”

When Woods was beaten by Micheel in the HSBC World Match Play in England, he acknowledged then that his streak was over at five. That could’ve been the end of the story, but it wasn’t.

You didn’t have to be a genius to plot Tiger’s course to history. If he got the Match Play, he’d head to Florida and play at Bay Hill, a tournament that was like an annuity for him, and the CA Championship at Doral, a course where he’d won twice. Those two wins would make it ten in a row.

Then he’d go for No. 11 to tie Nelson’s record, asterisks ablaze, at an event in which Woods had a pretty good track record — the Masters. And if he won the Masters, he’d also be on another streak of three majors in a row and would be poised to complete a second Tiger Slam (four majors in a row not in the same calendar year).

Even now it’s hard not to get goose bumps thinking about how perfectly the dominoes were arranged.

But they didn’t fall as planned. Woods won his first two matches in Tucson but fell in extra holes to Nick O’Hern, a left-handed Australian who had famously eliminated  Woods two years earlier. Woods came back from four down to tie O’Hern with a clutch birdie at the 18th. On the first extra hole, however, Woods missed a short birdie putt that would’ve won the match, then made a poor approach shot on the second hole and lost when O’Hern made a 12-foot birdie putt.

The Streak, phony or not, was officially over. But it was incredible.