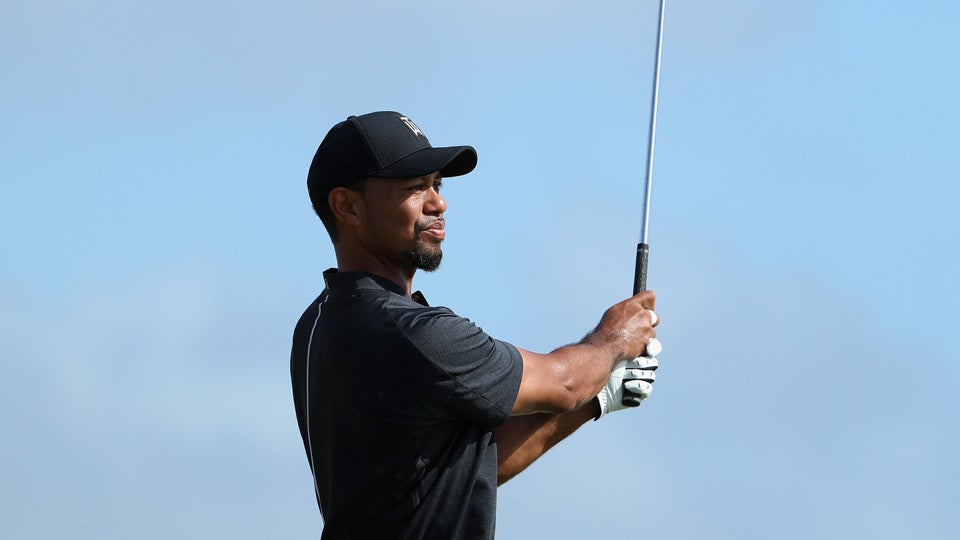 Tiger Woods shot a one-over 73 in his return to competition on Thursday.
Tiger Woods

NEW PROVIDENCE, Bahamas — I’ll never forget the first time I saw Tiger Woods hit a golf ball in the flesh. It was during the first round of the 1997 Masters. I had given up on him after he took 40 strokes to navigate the front nine, but a surge in Amen Corner left me speedwalking down the hill. I caught up to Woods as he was playing the par-4 14th hole. His drive had clipped a tree, leaving him a four-iron in. I was on a hillock looking down on the fairway when he flushed his approach shot.

The image remains burned into my brain in vivid detail: the swing that combined violence and poetry; the gunshot sound at impact; the majestic arc of the ball, outlined against the pines; Tiger’s predatory walk up the fairway. No single swing by any player has stayed with me like that one.

In the two decades since I’ve been lucky to witness Woods produce more iconic moments than can be recounted here. It was the thrill of a lifetime to watch him at the height of his powers. And so it has been surreal to see his sad decline over the last eight years, and at times impossible to square the Tiger who lives in my imagination with the diminished figure who suffered the ritual humiliation of the chip-yips, an 85 at the Memorial and other recent lowlights. Yes, it had been encouraging to see Woods smiling again during the practice rounds here at the World Challenge, but even as everyone around me has been drowning in the tsunami of hype accompanying his return (live tweeting a practice round, fer fook’s sake!) I hadn’t quite been able to share in the excitement. No, the overriding emotion has been dread. Woods talked this week about kicking off “phase two” of his career, but this isn’t the end of the beginning, it’s the beginning of the end. If things go wrong in this latest comeback — with his swing, his body or, most alarmingly, his psyche — that’s it, fin. There will be no coming back from the abyss yet again. And for all of Tiger’s flaws, it is inconceivable to imagine the game without his oversized presence.

All of this was swirling around in the hot, humid air when Woods stepped to the 1st tee at Albany Golf Club for the first round of the rest of his life. He was dressed in a badass all-black ensemble, befitting the high noon tee time. The World Challenge is a mostly meaningless hit-and-giggle event, but the tee was crowded with reporters, cameramen and assorted rubberneckers. The most dominant golfer of all time does not have the luxury of easing back into competition. The mood was tense, even fraught. As Woods settled over the ball, waggling his discordant new TaylorMade driver, it was so funereal quiet you could hear decorative flags flapping in the distance. On his first meaningful swing in 466 days he hit a quick pull into the left rough. But Woods was ready to play and made a routine par. Afterward, when asked what he was most pleased about in this debut, he said, “I think how quickly I fell into the competitive mode and I felt the feel of the round. By the time I hit my tee shot on the 2nd hole, I had already gotten into the flow of the round.”

On the 572-yard par-5 3rd hole he hit a beautiful high draw with his driver — when is the last time you read that? — and after going over the green with his approach faced a delicate pitch off a tight lie from a slight downslope. A palpable current of concern ran through the crowd. Reporters whispered to each other. But Woods played a gorgeous bump-and-run to stone dead for an easy birdie. He had passed the first test. On the next hole he pulled both his drive and approach and faced a delicate pitch off a side slope. Again Tiger played a nearly perfect shot, saving par on one of Albany’s toughest holes. Then all heaven broke loose.

On the 595-yard par-5 6th hole Woods encountered a steady right-to-left wind, so he hit a high-cut that split the fairway. He was shaping shots on command and couldn’t hide his delight. “Right now it’s just more natural now than anything else,” he said about his swing. “I’ve gone back to a lot of my old stuff that I used to do when I was a kid. Some of the feels have come back.” But going for the green with his three-wood he shoved the shot well to the right, into the grabby rough. From 60 yards he opened up the blade of his wedge and took a violent swing, playing a long-distance flop to five feet. It was vintage magic, and I felt my heart start to pound. Could this really be happening? The air was alive with an emotion rarely felt at a golf tournament: It wasn’t excitement; it was giddiness.

And then it happened. Woods stepped to the tee of the short par-4 7th hole and went back to the future, smashing a stinger three-wood down the middle. I was standing 10 feet away, directly behind the tee box, and he held his graceful, sawed-off finish an extra beat or two, outlined against the blue sky. For some reason I flashed back to that day long ago at Augusta National. It wasn’t just the purity of the shot that was so moving, it was the sense of promise. Had I become overwhelmed by the moment? Obviously. But that’s the effect Woods has always had on us when he’s playing his best golf.

Tiger followed with a perfectly judged approach shot to five feet for his second straight birdie, and then at the par-3 8th hole he rifled a six-iron at the flag. As he studied the ball in the air, he yelled, “Gimme one more yard!” His fingers have always been finely tuned instruments. He got that yard, and his ball carried onto the front of the green and then trickled to kick-in distance. The birdie pushed him to within a shot of the lead.

If the round had ended there we would all be the richer for it, but the rest of the day was a reminder that this would-be comeback is going to be a long process, filled with setbacks. On the par-5 9th hole Woods drove into a waste area, gouged it out, then pulled a long iron left of the green. He faced a tough chip, to a pin tucked on an elevated green, with a water hazard looming just beyond.

“The into the grain shots were sticky and they were very tough,” he said. The chip shot on nine “was into the grain, I had to hit it high and spinning and the wind’s downwind, so you’re trying to launch it in the green. I made a little mistake there.”

Woods muffed the shot, his ball expiring short of the green and trickling back toward him. On Twitter a debate raged whether it was a chunk, a deceleration or a simple babying of the shot. By any name it was disquieting. Woods showed some gumption getting up-and-down to save bogey, but you could feel the adrenaline drain away.

The back nine was an almighty struggle. Straining to make something happen, Woods “tried to kill” his drive on the par-5 11th hole, and he pulled it into a waste bunker. He hit his second shot into an unplayable lie and made his second bogey in three holes. On the short par-4 14th he missed his drive in the one spot you can’t, long and left. But he drained a meaty par putt — a 10-footer from the fringe — and it was a measure of how hard Woods was grinding that he offered a subdued fist-pump.

On par-5 15th he smashed a wind-aided 350-yard drive and then covered the flag with a seven-iron from 199 yards. He missed the 12-footer for eagle, but the birdie pushed him back to three under. Another excellent drive on 16 left him with only a mid-iron in, but Woods hooked it into trouble, bringing his first club-drop of 2016. After a hack out of a bush, a way-too-strong pitch from short of the green saddled him with a brutal double bogey.

On the par-4 18th hole he suffered another big miss, hooking his drive into the water and eventually taking a six for the fourth time in his final 10 holes. When it was finally over Woods had toured the back nine in 40 strokes for a 73 that left him one shot out of last place in the 18-man field and nine strokes behind leader J.B. Holmes. It was a joyless ending, but there was still plenty to build on.

“His swing didn’t look as violent, there was definitely better rhythm and better tempo,” Woods’s former swing coach Hank Haney said in a phone interview. “He hit a bunch of good iron shots. He just has to drive it in play more. When you chip it out sideways I consider that a penalty stroke, so overall he took four penalty strokes today. And twice he chipped and had to chip it again to get on the green, including the bunker shot [on 14]. If he cleans that stuff up I see him shooting at least one 66 the rest of the way, and then everyone gets excited. I kind of am already. Based on what I saw today, I think he wins more tournaments and one more major. But I reserve the right to take back that prediction if he chunks more chip shots. Everything is predicated on that.”

Haney can talk forever about the mechanics of Woods’s swing, but his reaction to Thursday’s round was more visceral. “Golf is so much more fun when he’s playing,” Haney said. “He’s so mesmerizing to watch, and it’s captivating to sit here and see where he’s going to go from here.”

Once again, that is the biggest question in golf. The mistakes Woods made will be reshown and analyzed endlessly until the second round offers a greater sample size on his reconstituted game. For me, I’ll remember the thrill of the first eight holes, and especially that image from the 7th tee. The old Tiger is gone forever, but wasn’t it fun to be reminded how much we’ve missed him?