Tiger Woods Shoots 64 In First Round of Wyndham Championship 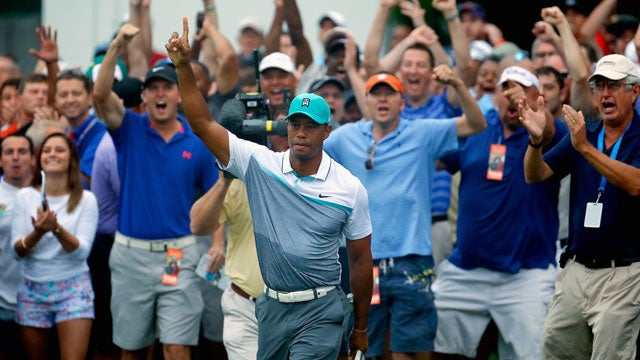 Tiger Woods reacts after chipping in for birdie on the 10th hole during the first round of the Wyndham Championship at Sedgefield Country Club on August 20, 2015 in Greensboro, North Carolina.
Getty Images

Tiger Woods just shot his best round in more than two years.

Woods carded seven birdies and one bogey in his opening round of the Wyndham Championship for a round of 64 and a spot on the first page of the leaderboard. It was his lowest round since he shot a 61 at the 2013 WGC-Bridgestone Invitational, also the last tournament he won. He finished two shots behind clubhouse leader William McGirt, who shot 62.

“It was finally nice to get something out of a round,” Woods said after his round. “A round that could be two to four under par was finally six. It was electric, especially early.”

Only a week removed from a poor performance on the greens at the PGA Championship, Woods curled in several mid-range putts on Thursday, ranking third in strokes gained putting at the end of his round. At the first hole, he didn’t even have to putt, as he holed a flop shot for birdie that got the crowd riled up early in the morning. Woods hit 14 of 18 greens and 7 of 14 fairways on the round.

“They were both solid today,” Woods said of his iron play and work on the greens. “It was nice.”

Even these are going in for Tiger right now. He’s 5 under. Watch live: http://t.co/WywtRLOLiq http://t.co/On3slX61LW

“Overall the people have been fantastic,” Woods said. “They have been so supportive. It’s a small-town atmosphere. I played with Davis (Love III) on Tuesday, and he said he’s seen the same people here for the last 20 years. I love that about tournaments like this. It’s a nice small backpark, and the people are intimate and very close. It’s fun.”

Playing with Brooks Koepka and Hideki Matsuyama, Woods was the surprising low man of the group. Koepka shot a 3-under 67 while Matsuyama finished with a 4-under 66. The group tees off for Round 2 at 12:50 p.m. ET on Friday.