Tiger Woods starts fast, struggles late to fall out of contention in Round 3 at Memorial

For nine holes early Saturday afternoon, Tiger Woods had the good vibes going again at the Memorial. Anything seemed possible, including his sixth career title at Jack’s place.

But then, as quickly as Woods clawed his way onto the leaderboard, he crashed out of it.

Woods shot a four-under front nine, but quickly erased it with a double bogey on the par-4 10th and another bogey on 14. He signed for a two-under 70 and was well outside the top 20 with the leaders still on the course Saturday afternoon. With 18 holes to go, Woods is simply too far back to win Jack’s event again this year.

“It’s frustrating, because that was the highest round I could possibly have shot today. Seventy could easily have been nothing today. I had it going, I was playing well,” Woods said. “The wind was a little bit tricky, but I was hitting it flush enough where I was getting through the wind. I got nothing out of the round today.”

Woods started strong – he left his approach shot on 1 short, but jarred his sand-blast for an opening birdie. And yes, he also wore a mock turtleneck.

The mock is back.@TigerWoods just birdied the first hole from the bunker.

Don't miss any of the third-round action from @MemorialGolf.

On 3 he staked his approach to 3 feet and drained another birdie putt. He followed that up with birdies on Muirfield’s two front-nine par 5s – 5 and 7 – and made the turn in 32. With that, he had cracked the top 10, and the Muirfield crowd was buzzing.

But on 10, Woods’s momentum came to a screeching stop after he drove into a deep fairway bunker on the left side of the fairway. Woods tried to wedge it back into play, but his ball slammed into the trap’s lip and dropped back in the sand near his feet. He chopped out to the fairway from there, but the damage was done. He two-putted for double. 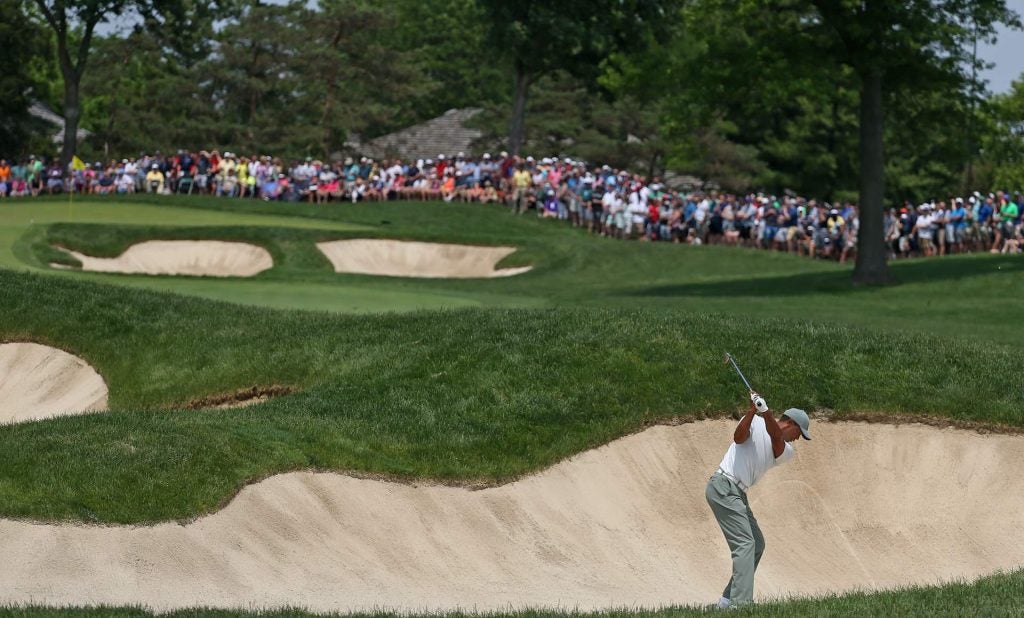 Woods's hot round came undone in the sand trap on the 10th hole.
Getty Images

On the par-5 11th Woods yanked his drive deep into the trees, and his ball settled on the edge of a paved cart path. He could’ve taken a drop, but rather than risk his ball settling in the deep rough on a sidehill lie, he played it, hitting a crisp, cutting iron shot that landed back the fairway. But he missed an 18-footer for a bounce-back birdie.

On the short par-4 14th Woods hit his approach from the fairway over the green and into the thick rough. He took a big chop and the ball flew out of the grass and scooted across the green. He two-putted from there for bogey.

Woods knocked in birdie putts on 15 and 16, but on 18 he drove into another bunker, left his approach short and failed to save par.

On Friday Woods shot a steady, if less-eventful, even-par 72 and began his third round seven shots behind leaders Martin Kaymer, Troy Merritt and K.H. Lee. Through three rounds he’s four-under for the tournament. This is his first event since missing the cut at the PGA Championship and his second event since his seismic victory at the Masters.

“I hit a lot of good shots the last three days here and really haven’t really scored like I’ve hit the golf ball,” Woods said. “So, if I can combine that and get something out of my rounds, this week I could easily have been right in the mix, wasn’t that far away.”

Woods won his most recent Memorial title in 2012. With his next win, he’ll tie Sam Snead on the all-time list with 82 career PGA Tour victories. That will be a tremendous achievement and when it happens the golf world will stop and pay tribute.

But it’ll have to wait at least another week.