Tiger Woods opens with rollercoaster round at Hero World Challenge 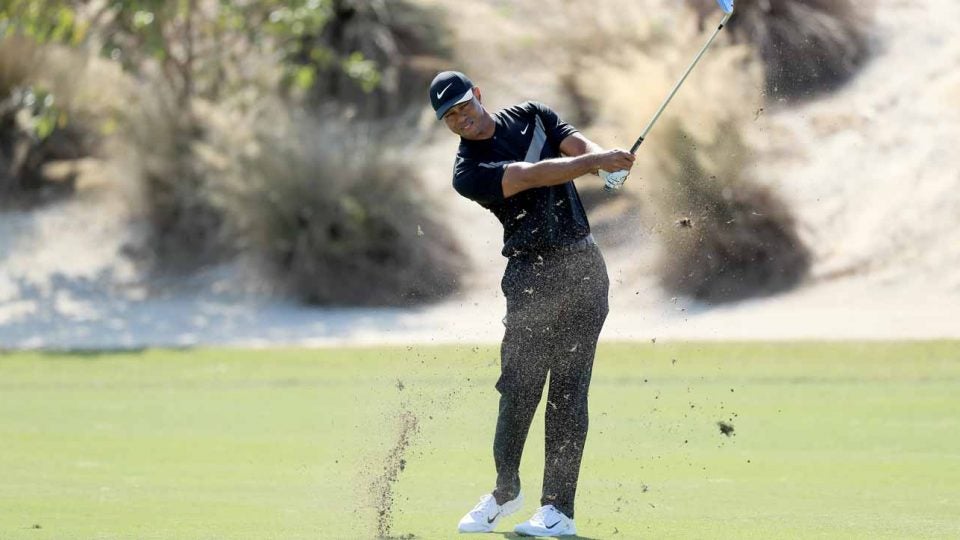 Tiger Woods had a rollercoaster first round at the Hero World Challenge.
Getty Images

As Tiger Woods and Justin Thomas came over a ridge on the 11th, they noticed both their drives had found the fairway — but one some 20 yards past the other. As they got closer, Woods noticed that the shorter of the two tee shots had Thomas’ Titleist stamping on it. He stopped, looked at Thomas, then looked back at the ball, as if to feign disbelief that his 43-year-old self had pounded it well past the 26-year-old bomber. He laughed out loud and walked forward to his own ball.

Thomas shook his head. “Gotta make the old man feel good once in a while,” he said.

When you're almost 44 and still pound it past JT pic.twitter.com/wUcu6GsbNF

Up to that point, the “old man” hadn’t felt particularly good about his round. Woods had bogeyed both par-5s on the front nine and sat 2-over through 10, struggling to get anything going on a gusty day at Albany Golf Club. In a field this talent-rich, that shot him to the bottom of the leaderboard.

But then things changed — and then they really changed — and then they changed again, adding up in the end to an even-par 72. But at the time, it seemed like the light moment with Thomas would mark the turning point in Woods’ round. He got up-and-down for birdie at the par-5 11th, settled for par after flagging an iron at 12, then walked in a birdie putt at No. 13 to get back to even par.

The drivable par-4 14th was playing downwind, and Woods’ 3-wood just trickled off the right edge of the green and down one of the devious slopes that (sort of) protect par at Albany. But Woods’ wedge game looks bulletproof, and he negotiated a tricky up-and-down for another birdie.

Then came the main event. Woods found himself just short of the par-5 15th in two and stared down his pitch shot before sending a spinner just left of the cup and watched as it checked up and broke ever so slightly to the right and into the center of the hole for an eagle 3. The crowd went as wild as an island crowd of a couple hundred is wont to get, and Woods was suddenly 3-under and back in the thick of things.

The turnaround called to mind Woods’ last start, when he quickly got to 3-over at the Zozo Championship. You know how that one ended. Zooming out, it called to mind something people admire so much about Woods, which is his unrelenting desire to succeed. One quote from his post-Zozo presser came to mind. “It’s satisfying to dig my way out of it and figure it out, figure out a way,” he said.

But hopes of getting within a couple of the leaders at the end of the round disappeared — along with his ball — in the bunker on the par-3 17th. Woods made bogey from a plugged lie, and the rollercoaster round continued on 18, when he found a fairway bunker off the tee and three-putted for double bogey.

“I didn’t putt that well today but my short game was great, drove it really well,” Woods said in a brief set of post-round remarks. “Just hit a couple poor iron shots that cost me a few shots.”

For Woods, the next two weeks are both a big deal and no deal at all. The Hero World Challenge is a fun exhibition, 18 golfers playing in front of sparse crowds in an island paradise. The Presidents Cup is another exhibition that the U.S. is likely to win; they’ve only lost once. But in both cases Woods has plenty at stake; this week he’s a tournament host-slash-competitor, next week he’s a captain-slash-player. If the U.S. team shows up to Royal Melbourne next week in poor form, there’s one guy who will be shouldering the blame.

At the end of the day, Woods’ even-par 72 left him on the bottom half of the leaderboard, six shots off the pace set by Gary Woodland and Patrick Reed, who posted matching rounds of 66. They’ll re-pair before Thursday’s second round; there’s a good chance Woods will be playing with another Presidents Cup teammate. For now, he’ll keep doing his thing: trying to beat them.