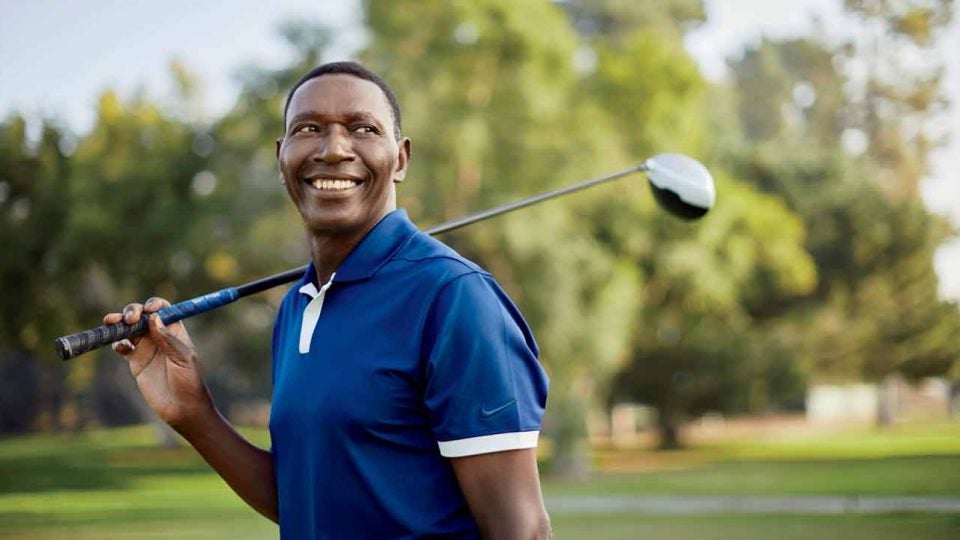 James Tigabasa was inspired to pursue a career in golf after watching Tiger Woods win the 1997 Masters.
Jeff Newton

When Tiger was a kid, he had public golf in south­ern California covered. He played at Griffith Park in Los Angeles, wearing a gold chain and a hard-collared shirt. He played in junior events at Torrey Pines, Earl hovering. He played his high school matches at a short, tight municipal course in Ana­heim called Dad Miller. Now the Tiger Woods Learning Center is next to it. The build­ing practically shines.

Once, at a rubber-chicken dinner, Tiger put his hand on the shoulder of man named James Tigabasa, a golf instructor at the center, and said, “You’re doing a good job. Keep doing what you’re doing.” It was some trip for Tigabasa to that moment.

In the 1960s in rural Uganda, he walked to school wearing just a long shirt because he had no pants. Now he has pants for every day of the week and a 1999 Nissan Altima, too. Tigabasa grew up in a hut with mud walls, a grass roof and no running water. It’s almost pointless to say he had no golf dreams then. What was golf? His father had three wives. Tigabasa ate his share of antelope and wild pig. He and I had a meal at a packed Olive Garden in suburban Orange County. Restaurant culture is still foreign to him.

News
When Nathaniel Crosby led the U.S. Walker Cup team to victory, he played his hunches

When he was 10 or 11, Tigabasa found his way to a simple nine­-hole course 10 miles from his home to caddie. (Where Brits once roamed, golf remains.) He walked there. He learned to play and to hit it straight. Golf balls were precious. Later he worked at the Uganda Golf Club in Kampala, the capital. It was there that Tigabasa saw something unimaginable on the clubhouse TV: a black man winning a golf tournament. Tiger Woods, the Mas­ters, 1997. The event that changed the course of Tigabasa’s life.

Tigabasa was in his mid-30s. (Life without a birth certifi­cate.) His dream became to work in golf in a country that had so much opportunity that a black man could win a tournament on TV. The United States had produced Tiger Woods and that was enough for Tigabasa. Within a decade, Tigabasa had shot a 59 at Dad Miller. He worked there and later next door, where he met Bill Clinton. “I may be the only African to shake hands with Tiger Woods and Bill Clinton on the same day,” he told me, smiling. Even his teeth are strong.

He was standing behind the counter in the Dad Miller pro shop. Happy Gilmore was playing on a raised TV. An older employee came in with an American flag and he and Tigabasa folded it into a neat triangle. A man came in with his young son, selected a few things, and, like a card dealer at a casino, flipped his credit card at Tigabasa, the counter as a card table. Tigabasa rang the man up, handed him his receipt and credit card and said, “Okay, sir?” The man was as white as an O.B. stake. Tigabasa has dark skin and accented English. You could not see the man’s card flip as anything other than bad manners rooted in xenophobia. Tiga­basa said, “It is what it is.” He was not intentionally quoting Tiger. “I’ve got to do my job.”

News
This year’s Army-Navy golf match was at Pine Valley, here’s how it played out

When people discover Tigabasa is a good golfer, they sometimes treat him with sudden respect. It annoys him. Playing golf, hitting balls and teaching the game brings him a deep pleasure. He teaches a girl named Kamille Dimayaga, an American-born teenager from a Fil­ipino family. She’s a Tiger Woods Foundation scholar. Tigabasa is sure her report cards and scorecards will help her find a path to college. It’s happened before.

Tigabasa worked at the learn­ing center for less than three years. He was let go. He was not schooled in the methods of American jun­ior-golf instruction and that might have been part of it. He was lucky. He was able to return to his old job next door at the driving range and pro shop at Dad Miller. But getting fired hurt and still hurts. Tigabasa was so proud to have even a distant association with Tiger Woods, who had unknowingly lured him to this country. Tiger Woods had put his hand on Tigabasa’s shoulder and praised him. That’s forever.

When Tiger won the Masters last year, Tigabasa leaped with joy. Such is the reverence that James Tigabasa has for the man. Such is his gratitude.