When Nathaniel Crosby led the U.S. Walker Cup team to victory, he played his hunches 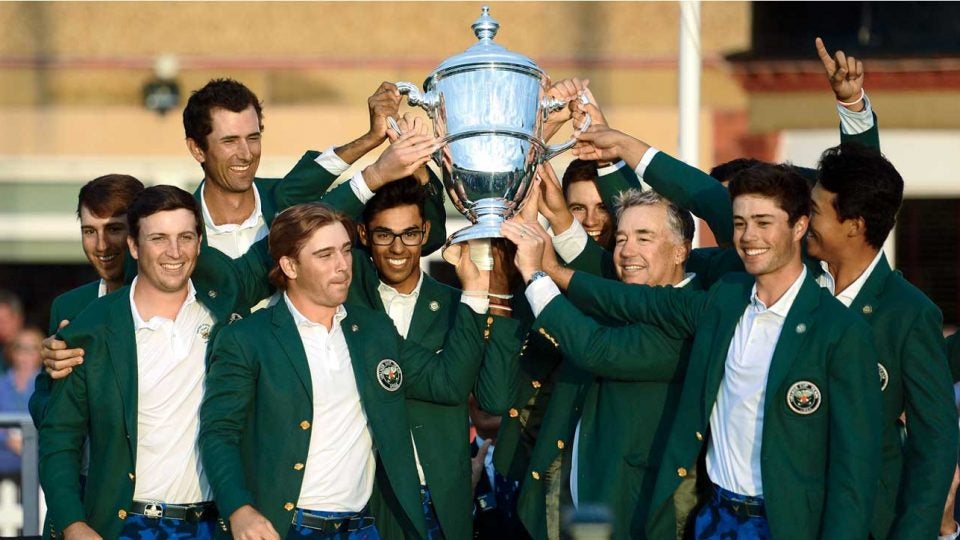 Bing Crosby died on a fall day on a golf course in Spain, and soon after his great friend George Coleman treated Bing’s son Nathaniel to a few days of consolation golf at Seminole, in South Florida. George, the president of Seminole and a benefactor of The Match, had his friend Ben Hogan there as well.

“What’s this?” Hogan asked Nathaniel one morning, as their golf bags were being unpacked from a car parked in front of Seminole’s pink clubhouse. They had both just wrapped up their stay as guests in the Coleman house, on the Atlantic. Nathaniel, who was 16, had a lot of hair. It was 1978. “It’s a hair dryer, Mr. Hogan.” “Nathaniel,” Hogan said. “Hair dryers are for girls.”

A finger snaps and it’s 42 years later, late summer 2019. (Time crawls and time sprints and there is no in-between.) Nathaniel Crosby is the captain of the U.S. Walker Cup team, playing a road game at Hoylake, near Liverpool. He got the job on some aged credentials. Nathaniel won the 1981 U.S. Amateur at the Olympic Club in San Francisco, where he lived. The next year, he was the low amateur at the U.S. Open at Pebble Beach, where his father was the host of the National Pro-Am for decades. In both cases, strange forces had to be at work, because Nathaniel Crosby was a good golfer but not an elite one. He wasn’t Corey Pavin. Talk about your peak experiences. Nathaniel had two in 10 months.

Everything’s a little different over there. The U.S. team was using the ladies’ locker room at Hoylake, which is also called Royal Liverpool, just to keep you on your toes. Nathaniel knew exactly what he was doing, except for when he was winging it. On Saturday morning, and again on Sunday morning, each side would be sending out four two-man teams to play in foursomes. What does that even mean? Who knows, but their foursomes is our alternate shot.

Nathaniel had an idea, possibly good, maybe not. He had watched the kids — the youngest was 17 and the second oldest was 22 — practice, eat and hang for a week. Now it was Friday afternoon and the two-day weekend event was nigh (whatever that means). He had some thoughts about who should play with whom. Not thoughts — decisions. He met with his players in five groups of two and told them exactly what they would be doing on Saturday and Sunday morning as two-man teams and on Saturday and Sunday afternoon in singles. In other words, the lineups were set.

“I didn’t want to do it in a big room, with everyone there,” Nathaniel said. “I didn’t want a forum for an open discussion.” Akshay Bhatia, 17, the youngest player, would be playing with Stewart Hagestad, 28, the oldest, twice. Why? Nathaniel is out of the Crenshaw school. He had a feeling. By Saturday night, GB&I had a 7–5 lead. Yes, of course: Akshay–Stewart lost Saturday morn.

If golf has a George Coleman today, it’s a lion of Wall Street named Jimmy Dunne. He was on hand at Hoylake, watching nervously, and not because he had a few quid riding on the outcome. Nathaniel is a member of Seminole. Jimmy is the president of Seminole. The Walker Cup is coming to Seminole in 2021. The tradition — the tradition — has been for the USGA to give U.S. Walker Cup captains two cracks, once over there, once at home. Jimmy loved the idea of a Seminole member, especially this particular Seminole member, being the captain for a Walker Cup played at Seminole. But storms of worst-case scenarios were pounding down on Jimmy’s brain: What if we get blown out on Sunday? Would they bring in a new guy for the next one?

Young Akshay and old Stewart played together again on Sunday morning, per Nathaniel’s preordained plan. They won. They both won their singles matches on Sunday afternoon, and six other American players did, too. The U.S. won handily. At Seminole, in ’21, Nathaniel will likely be captain again. He can show the kids on his team George Coleman’s old backyard, where Ben Hogan once memorably hit balls into the Atlantic, and how Hogan, on Seminole’s pebbled driveway, once told Nathaniel that hair dryers are for girls. Some people are just born under a lucky star.