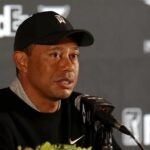 Tiger Woods made it clear Wednesday: he still has "a long way to go" before returning to the PGA Tour.

PACIFIC PALISADES, Calif. — Sorry, Tiger Woods fans. The 15-time major-winner is not coming back to play the PGA Tour in the immediate future.

“I wish I could tell you when I’m playing again,” Woods told reporters Wednesday at the event he hosts, the Genesis Invitational. “I want to know, but I don’t. My golf activity has been very limited. I can chip and putt really well and hit short irons very well, but I haven’t done any long stuff seriously. I’m still working. Like at the PNC, I’m still working on the walking part.”

The PNC — that is, the PNC Championship, at which Woods and his son, Charlie, threw a jolt into the golf world in mid-December — was the last time we saw or heard from Woods. Despite Team Woods making a run for the title that week, and some pros being impressed with Tiger’s progress, Woods said then that he was not close to a PGA Tour return. He was quick to remind everyone he spent the week largely riding around in a cart.

On Wednesday, the message was largely more of the same.

Woods walked into the press room at Riviera wearing a big smile, like he has done hundreds of times in his career. He sat up on stage next to Aaron Beverly, this week’s Charlie Sifford Memorial exemption. This year marks what would have been Sifford’s 100th birthday, and Woods beamed when sharing details of how Sifford impacted his life and career. But after 35 minutes up on stage, Woods exited more gingerly than he entered. As he has said, sitting in an upright chair for a long period doesn’t always feel great. And in addition to his lower body injuries, he admitted his nagging back issues still persist. Woods, who is 46, is happy to play host this week, but he’s also unhappy with how slow the process has been.

So, what does that all mean for his public golf life moving forward?

Woods said there’s progress in his overall strength, compared to late 2021, and his ability to practice more short game shots has increased. But to plan a return event, he’ll need to be able to play about six rounds of golf in seven days. That implies hundreds of shots, sure, but more than anything it also means a lot of walking.

“I can walk on a treadmill all day, that’s easy,” he said. “That’s just straight, there’s no bumps in the road. But walking on a golf course where there’s undulations, I have a long way to go.”

Woods repeated those last five words twice more throughout his presser. A long way to go. Disappointing as it may be for fans, it was an important reminder that what many people saw through their TV screens two months ago had plenty of context layered within. What Woods did in Orlando during the PNC was hit a lot of smooth shots, plenty of short shots and play just a few rounds where the longest walk, by his estimate, was between the green and the cart path. That’s not many steps when added up.

Could Woods play (and walk) the Par-3 Contest at the Masters in seven weeks, he was asked Wednesday.

“I can walk that now,” Woods said. But he wouldn’t commit to doing so. Woods is not a man who likes to make unplanned commitments during press conferences. He remains defiant as ever, confident in his comeback — which will never again be a full-time schedule — and feeling fortunate, nearly a year after his horrific accident, to be where he is: hosting a PGA Tour event, sending tons of emails, attending meetings he would have skipped as a player.

“’I’m very lucky, very lucky,” he said. “As a lot of you guys know, I didn’t know if I was going to have the right leg or not. So to be able to have my right leg still here, it’s huge. I still have a lot of issues with it, but it’s mine and I’m very thankful for that.”