There Was Another Big Winner on the Olympic Course This Week: the Game Itself 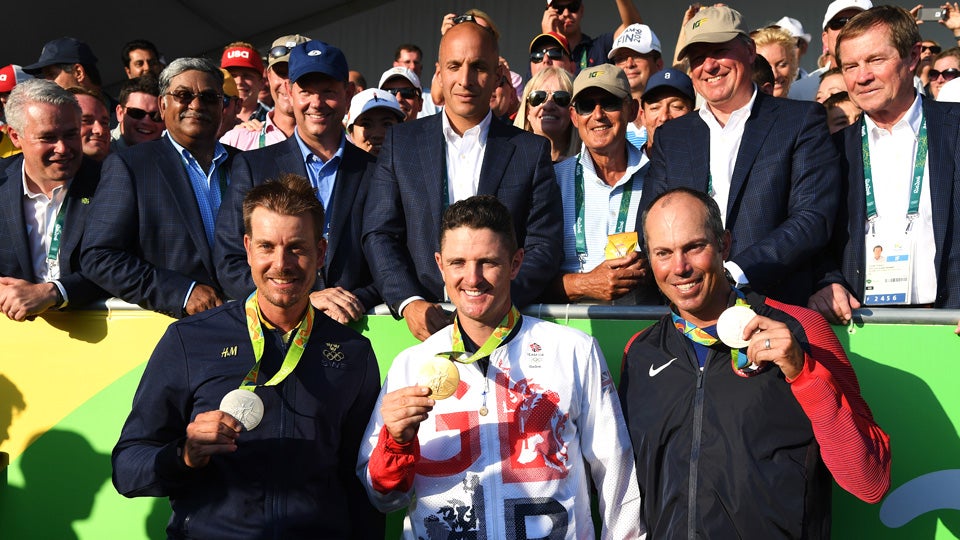 After seven years of planning, the most important new golf TV show in decades finally aired: Big Break Rio: Golfers Gone Wild. Golf in the Olympics was vilified, dissed, hyped, politicized and, finally, played. Brazilian sports fans — mad for soccer and beach volleyball — came out in droves for the Sunday finale, even though golf plays no role in Rio’s sporting culture. More significantly, tens of millions across the world watched on TV as Justin Rose of England won the gold medal, Henrik Stenson of Sweden the silver and Matt Kuchar the bronze.

Even watching on TV — as I did — the Olympic golf never felt like an ordinary tournament, or even one of the game’s four majors. It was a great many things. The golf duds with next to no corporate emblems. The new course, built for the occasion, which, on TV, looks like a course you would want to play (and got solid reviews from the world’s fussiest critics themselves, Tour players). And then the extraordinary notion of playing for an … Olympic medal. For all the flaws of the modern Games — doping, bribery payments, corrupt judging — there is still something beautiful and inspiring about it all. Now and forever, those three golfers will be linked to Jesse Owens, Olga Korbut and Mark Spitz. They are part of the continuum.

One of the delights of the Sunday telecast — in addition to Johnny Miller’s trenchant analysis, on NBC and Golf Channel at the same time — was that the players were playing for something other than first. Yes, first is gold, and gold is best. By then the country-by-country medal count is done when the Games are over (and the women golfers are still to come), all three colors count the same.

Stenson and Kuchar were winners too. To borrow from Padraig Harrington and Bubba Watson, the 57 competitors who didn’t medal were too. When you’re wrapping things up on this earth, it will feel pretty to good to say, “I was an Olympic athlete.” As for the players who declined to participate, including Jason Day, Jordan Spieth, Rory McIlroy and Dustin Johnson, their absence did nothing to detract from the event. It just created more opportunity for some of golf’s understudies. It’s hard to think of Kuchar that way, but that’s really what he is. Yes, he’s a Ryder Cupper and a proven commodity and a good presence. But without a professional major, he’s made little impact on the history of the game. He hasn’t won on Tour since Houston in 2014, more than two years ago. And he wouldn’t have even been in the Olympics field if not for Spieth’s withdrawal. But what he did on Sunday at Rio on the bumpy (that’s a compliment) Gil Hanse course made more of a mark on the game than anything else he has accomplished. With thousands of spectators suddenly discovering the joy of this familiar yelp — Kooch! — he shot a final-round 63, eight under par, for a four-day total of 13 under, which got him his medal. Yes, it’s third. But it’s not third at the John Deere Classic. This third gets you on a podium surrounded by photographers and the world and that snap has no half-life.

It’s some hole — just 135 yards, but with a menacing sand pit in front of a slender green and difficult run-it-up-the-hill chip shots from over it. The hole is a superb test of distance control — and nerve. A good course has no formula, but you can’t say enough about the value of the short par-3, especially late in the round, when your adrenaline is running wild. Both made a routine par.

And so it came to 18. In the U.S. Amateur, the winner and the runner-up get an invitation to the Masters. In September, they will be European teammates at the Ryder Cup. But as they stood on the tee of the long par-5, the week’s it’s-all-good spirit vanished. Suddenly, there was an immeasurable chasm between gold and silver and between Great Britain and Sweden, between a former U.S. Open winner (Rose, at Merion in 2013) and the reigning British Open champion.

Both hit drivers. (Hallelujah! A par-5 that required a driver.) The players and their caddies made numerous requests for fans to put away their camera phones.

When Kuchar finished, he did the obligatory post-round interview, with Steve Sands of NBC Sports. Kuchar has done a hundred of them over the years, but this one was different. Sands asked a fine question (he often does): How would you compare a third here with your Tour wins? Kuchar couldn’t really answer because there is no answer. Olympic golf showed itself to be sui generis. “I’ve never felt this sort of pride,” Kuchar replied. “Busting out of my chest.”

This has been the Summer of Stenson. His play at Troon was extraordinary. He hung around at the PGA Championship for three rounds. He made Sunday at Rio a fascination right through the 18th green.

But the fact is, the ultimate supporting player were the Games themselves. Rose made a birdie on the last to win, and suddenly it was like Seve Ballesteros, the great Spaniard who 30 years ago argued that golf should be in the Olympics, was back for an encore. Rose understood exactly what he had done. The victory was for himself, for his country — and for the game. He pounded his heart in victory. Yep.