The Tiger and Phil Show was a bit of a letdown Thursday, but it was still a spectacle to behold

PONTE VEDRA BEACH, Fla. — As the whole free world knows, Tiger and Phil had a 1:52 tee time Thursday afternoon at the Players. (Rickie made three, yes. Are surnames really necessary?) By 1:50 p.m., the Woods-Mickelson early-week-ain’t-this-fun chumfest was over. Woods came onto the tee, under a baking sun, and greeted his (back-in-the-day) fellow Californian with a handshake that was strictly business.

There they were, two fortysomethings, at their workstations, trying to remain relevant in a changing world and both doing, to date, a damn fine job of it. Each is trying to make Jim Furyk’s Ryder Cup team come fall. Each is trying to add to his major total (14 for Woods, five for Mickelson) before their final sunsets. Each is trying to fatten his wallet — Woods has $111 million, Mickelson $87 million.

Then there’s this week, at least before the first shots were hit in anger: Each was trying to win another Players title, on a course about which neither ever sounds particularly effusive. Woods has two titles here and Mickelson one. By Sunday night, those totals are not likely to change, but you never know. Anyway, the thing about being a legend is to make each day count, to put some kind of deposit in various memory banks. Joe D. — not the Tour’s Joey D, the fitness guy; we speak here of the Yankee Clipper — was once asked why he played a ball so hard in a meaningless game. His answer, at least after it ran through several old-timey typewriters, is a timeless piece of advice: “Because there might have been somebody in the stands today who’d never seen me play before.” Oh, man.

Woods was up and down on Thursday and Mickelson was mostly down, with a four-hole back-nine stretch in which he went 6-5-7-5. Yes, he was shooting one of those we-ran-out-of-area-codes phone numbers. On the par-5 9th, Woods enjoyed a 3, while Mickelson required twice as many shots.

Mickelson will have to shoot something well south of 70 to have any chance of making the cut, which is likely to be around even par. This is a hard cut to make, because so many things can go wrong on the course and because the field, from one to 144, is so deep. Woods, over the course of his playing career, often played aggressive rounds on Fridays, once he was comfortable with the course and with his swing. He won’t be able to do that here, even though it is his stated game plan. He would likely be loathe to admit this, but the first goal of his Friday round, on a warm day when the ball can go unexpectedly long, will be to keep his ball dry for 18 holes.

It was interesting, watching these two play together for only the 36th time in their long careers. Waiting for the opening bell, Phil was (briefly) guffawing with Roger Maltbie of NBC Sports and Tiger was (briefly) chatting casually with Fowler. For each other, they shared a brief handshake and that was that.

Mickelson, in his putting life, went to a fat grip and holds it claw-style, as so many of his generation have done, while Woods is faithful to his old and traditional ways, the reverse overlap of yore and a Ping putter grip with the diameter of a pretzel stick. Mickelson’s swing is a shoulders-and-legs study in rhythm. Tiger’s swing, now more than ever — he’s fused, you know — is an arm smash. He hit his second shot on the 9th, a highlight reel 6-iron, so hard just watching it hurt.

And then there were their getups. Mickelson on Thursday was wearing a baby blue long-sleeve button-front dress shirt that you’d associate with East Lake (Bobby Jones’s home course) circa 1930 before you’d peg it to TPC Sawgrass on a warm May day in 2018. (Jones’s shirts buttoned down the front, too, but, were not, as the new Mickelson line is, 15 percent Spandex.) Woods’s polyester pants had aeration holes below the back belt that may not have earned him style points but had the distinct advantage of being practical on a day when the air temperature was pushing 90.

If Phil has had any tats inked to his arms since he was last seen in short sleeves, this reporter cannot say. It can be said with certainty that he continues to play with a watch on, although it cannot be seen underneath the cuff of his right sleeve. He checked the time while standing on the 18th tee. The round took five hours and 20 minutes to play. Yikes, is that painful. 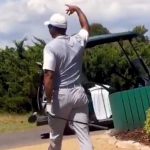 You may also like Clash of the titans: Don’t be fooled by their newfound chumminess, Tiger and Phil are playing to win

It had to be galling for Woods to play last on the 1st. When there are three Tour winners in the group, as there was in this case, the player who has won most recently plays first and the player with the second-most recent win plays second. Tiger needed two more shots in Tampa. But facts are facts and the fact is Mickelson’s last win, his 42nd on the PGA Tour, came in Mexico City on March 4. Fowler’s last win — his fourth Tour title — came at the Honda Classic on Feb. 26, 2017. Woods’s last win — his 79th — came at Firestone on Aug. 4, 2013.

It was a polite answer.