Clash of the titans: Don’t be fooled by their newfound chumminess, Tiger and Phil are playing to win

There is now and there is later. The promise of this particular now is so exciting that David Duval, from his perch on the Golf Channel set live at the Players, is practically jumping through your HDTV. The normally placid former world No. 1 (and Players winner) is ecstatic, here on the eve of the golf season’s second major (his take) and the prospect of Phil Mickelson and Tiger Woods — and their little buddy, Rickie Fowler — playing golf together on Thursday and Friday. That threesome will gather on the first tee at 1:52 p.m. in the first round and on the 10th tee Friday morning at 8:27.

But who knows? Maybe one or two or three of them will go low. The results, of course, will come later. For now we have the promise of what could be. Since the Tour is getting serious about the prospect of broadly legal sports betting in these United States, who would you take for low man in the 1:52 game on Thursday? How about for 8:27 on Friday? If you want to make the case for Phil in Round 1 (most experienced) and Rickie for Round 2 (he settles down from all the excitement), have at it. It’s all just play money for now, right?

Do you know anybody who is going to take Tiger? On the basis of his astounding history in the game, yes, of course. Millions would. But that’s not how most punters (Briticism) think. They take a notoriously short-term view, and Woods’s play at Augusta was decidedly eh and his play at Quail Hollow is more eh yet. 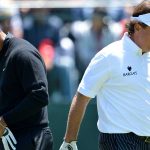 You may also like Tiger vs. Phil: Who has played better when they’re paired together? The answer might surprise you

It’s an odd thing, to see Phil and Tiger paired together. It has happened only 35 times over the past 20-plus years, not counting their 2004 Ryder Cup pairing, and not counting their Masters practice round, last month. Here they are, two of the most powerful people in the game, but when it comes to saying who will play with whom in their tournament play, they have no (or very little) say. Most weeks, it’s a numbers game, with the groups based on tournament wins and Tour status and other just-the-facts-ma’am facts. At the majors and a few other events, the groups are made by committee.

Woods’s stroke average, when they play together, is 69.60 and Mickelson’s is 69.91. Talk about a razor’s edge. The difference in their skill level is almost immeasurable.

But the difference in their ability to win can be measured starkly — in wins. Woods, who is 42, and Mickelson, who is 47, have played in the same Tour event 237 times. Woods has won 57 of those events, and Mickelson 16, according to numbers provided by the Tour. Yes, Mickelson would surely have won more events had he chosen to play in more tournaments where Woods was not playing. But that wouldn’t be very Phil, would it?

Mickelson has always had a genuine respect for Woods’s stature in the game, but you couldn’t say the opposite is true. A decade or more ago, Woods was privately dismissive of Mickelson. Mickelson’s outgoing manner with fans and high-octane interviews bothered Woods, and his general view of Mickelson was that he was an act. It was likely unfair. At some point, your act becomes your life if you are loyal to it, right? But it was not, to generalize, in Woods’s nature to have a generous view of other people, particularly those with whom he is competing. 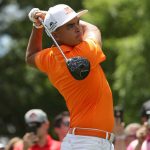 You may also like Expert picks: Our staff selects Players Championship favorites and sleepers
​

On Labor Day, in 2007 in Boston, Mickelson beat Woods in the Deutsche Bank Championship, an event for which Woods was an unofficial host. Most gallingly, Mickelson won while being coached by Butch Harmon, Woods’s former swing coach. That day didn’t help Woods’s view of Mickelson. But if you know anything about Woods, you know it inspired him.

In the first two rounds of the 2008 U.S. Open at Torrey Pines — a course Mickelson played scores of times as a kid growing up in San Diego — Woods and Mickelson were paired together, along with Adam Scott. One of Woods’s goals, always, is to beat his playing partners. Woods opened 72-68. Mickelson went 71-75. You likely know what happened next: Woods won, in 91 holes. Mickelson’s four-round total, 290, was seven shots out of the Tiger-Rocco playoff. Woods has won no majors since then. Mickelson has won two.

You may see all manner of bonhomie between these two giants of the game. Believe only part of it. History doesn’t just vanish, no matter how good the fellas may be with a microphone under their mouths. You’ve seen these guys in their TV commercials. Not only can they play, they can act.