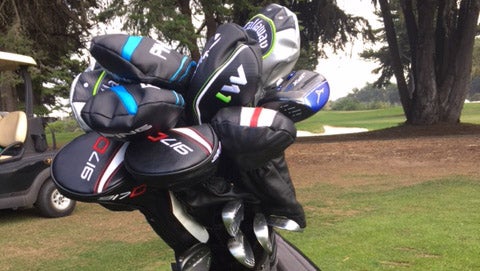 Alan Shipnuck's quest to find the perfect driver led him to a local clubfitting guru.
Courtesy of Alan Shipnuck

I knew I’d gone too far when I showed up at Bayonet Golf Course and every golfer there was giving me side-eye. I guess folks aren’t used to seeing a dude carrying a bag stuffed with nine drivers and their colorful head covers. But in the search for the perfect driver, you gotta go big. I had borrowed most of the clubs from Golf Mart, my local house of worship, in Seaside, Calif. Waiting for me on the range was a TrackMan and an even more finely calibrated piece of equipment: Joe Kwok’s brain.

Kwok is a San Francisco–based clubfitter with a cult following on GolfWRX. He has a mystical, Mr. Miyagi–like way of imparting wisdom. Fanned out in front of him today were a wide selection of shafts to experiment with. Gulp. I couldn’t remember the last time I hit a full bucket of balls. Suddenly I was wishing for a golf variant of Viagra.

We began by establishing a baseline with my gamer, a first-gen TaylorMade SLDR. It’s so old that part of its sole is missing, which Kwok found hilarious: “It probably changes things by two swingweights!”

For Kwok, the key piece of data is smash factor: ball speed divided by clubhead speed. The bigger the number the better, and reaching 1.50 is our unofficial goal. I made a half dozen good swings with my SLDR, and the average smash factor was 1.46, but Kwok was unimpressed by its trajectory: “Look, it’s falling out of the sky,” he said, as if he had spied a wounded bird. This has been my ball flight for the last five years.

Next I hit the new TaylorMade M1. My first swing was pretty good, a 1.48 smash. Then I pured the next hit, leading to the ultimate expression of Kwok’s enthusiasm: “Oh, s—!” Smash factor was 1.52, with a carry distance of 266 yards, 20 more than my SLDR. I was ready to end the fitting after two swings.

But ensuing numbers on the TrackMan weren’t as promising. Blame it on user error; I’m hardly a metronomic ballstriker. In an effort to improve my shaky 8.1 index, I’ve taken a few lessons lately. Sometimes I remember what to do, sometimes I don’t. The bad version of my old swing has a tendency to produce a weak fade, to which Kwok never failed to ask, “Just a little off the heel?”

I next tried the Mizuno JPX 900. With its sweet cobalt-blue head, it had my favorite aesthetics, but even with a couple of different shafts and tweakings of loft, my ball flight was too high and spinny.

Next up was the Ping G. I kept losing shots to the right, even after a shaft change, but I don’t blame the Ping—or the Mizuno either. I realized I had completely forgotten my new swing thought and was slashing at the ball with my old, inefficient action. This is the problem with high-tech fittings: We’re still human. But Kwok was encouraged that even my mediocre hits with the Ping were generating a smash factor of 1.46. We decided I’d give it a second chance after taking a break—75 balls in and I was feeling a little punch-drunk.

Refreshed, I hit Titleist’s 917D2 nicely, and it had the tightest dispersion of shots. If I were smart, I’d probably have picked the 917D2, because hitting more fairways is a key for me. But driver fittings aren’t about being smart. They’re much more visceral, a primal need to grab every last yard. So we moved on.

My last driver of the day was the new Callaway Great Big Bertha Epic. I made three good swings but wasn’t sure what to think. A lot of what we call feel is actually sound, and Callaway’s signature note is more muted than other drivers, which left me wondering if the hit was softer. Kwok studied the numbers and rendered his verdict: “Ohhhh, s—!” The smash factor was the highest of the day: 1.53. My ball speed had peaked, too.

Now it was time to dial in the shaft. Kwok gave me a Mitsubishi Kuro Kage Ltd. The clubhead felt as light as a feather, and my clubhead speed shot up to 111 mph. I was giddy. That’s approaching big-boy numbers. We tried that shaft with the M1, G and Epic, and experimented with another Kuro Kage: the XT 50. I lost a little speed but had much better feel, which led to fewer big misses. Across all three heads the good swings produced pretty similar results, but on the dreaded heel hits the Epic was smashing at 1.49, significantly higher than the other two.

After 111 swings, that was the tie-breaker. It’s the Holy Grail to find a driver that produces the highest ball speed and the most forgiveness on your typical miss. This Epic, with this shaft, was the driver for me.

And for you? It’s impossible to say. Clubfitting has never been better, but it’s not an exact science. And every fitting is very idiosyncratic. Your mileage may vary. Mine, too. If I went back the very next day, my body and my swing would feel just a bit different, and the numbers might direct me to a different big stick.

Luckily, I was too stiff and sore to try again.