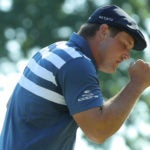 Bryson DeChambeau pumps his fist on his way to victory at the Rocket Mortgage Classic.

Bryson DeChambeau stood on the 16th tee at Detroit Golf Club on Sunday with a precarious one-shot lead at the Rocket Mortgage Classic. After the 10th hole, he had led by four strokes. On the 14th hole, he hit his second shot into the rocks leading up to a water hazard and bogeyed.

DeChambeau has gained muscle over the past year – noticeably during the PGA Tour’s recent three-month hiatus due to the coronavirus – and with it, he’s gained distance throughout his bag. Muscle, apparently, also supports a collapsing golfer. Sunday’s victory was his sixth in his five seasons on the PGA Tour. The birdie-birdie-birdie end made it arguably his most clutch final round, if not his most impressive.

“I just had a weird string of events on the last, I’d say, three or four holes and obviously the shot going into the water on 14, I had no idea,” DeChambeau said of his three-hole finish.

“I was able to stripe a drive on 16 and then hit a decent wedge shot in there and I knew I had to make that putt. I knew if I was to make that putt and go birdie-birdie-birdie coming in, it’d be really difficult to beat me and that’s just what I tried to do and I made a 30-footer and that just spurred me on for the rest of the day.”

His first win, at the John Deere Classic in 2017, came close. DeChambeau entered the final round four shots behind leader Patrick Rodgers – similar, too, to the three-shot deficit he faced entering Sunday – and he finished birdie-birdie, capped by a 14-footer on 18. DeChambeau’s rally came late, as he did not have the lead until Rodgers bogeyed the 17th. An impressive win, for sure.

Across all of DeChambeau’s rounds, he’s gone birdie-birdie-birdie over his final three holes just four other times. (He went birdie-birdie-eagle during his win at the Dell Technologies Championship in 2018, so we’ll count that.) He had accomplished the feat in the fourth round just one other time – at the 2018 RBC Heritage, where he tied for third. Since he started playing PGA Tour events in 2015, DeChambeau has played 341 rounds and has hit the birdie trifecta five times, or about 1.5 percent of his rounds.

He almost did it during the final round of last year’s 3M Open. He went birdie-par-eagle and finished second by a stroke. To Matthew Wolff.

Whom DeChambeau held off on Sunday.