The Presidents Cup Was Great, But More Changes Are Needed 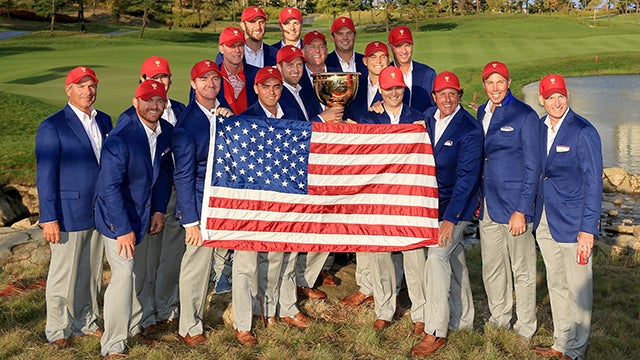 There’s a fun commercial that occasionally runs during golf telecasts in which a sea monster terrorizes a tournament. Early iterations of the ad featured a Masters scoreboard — that part was quickly changed — but I think more about the goofy ad as it relates to the Presidents Cup, which ended more or less as well as it could have at Jack Nicklaus Golf Club Korea on Sunday at the gruesome hour of 2:30 a.m. ET.

The contest was close. Every match mattered. But how best to “unleash the Kraken” lurking within the P.C.? How best to add some ferocity to this bland imitation of the Ryder Cup? One theory coming into last week was that the Internationals had to win for a change after going 1-8-1 in the first 10 iterations of the Cup. That didn’t happen, but the Stars & Stripes’ 15.5-14.5 win at least made this edition more interesting than most Presidents Cups.

“These guys have now got an impetus to go on from here,” said Nick Price, who as the International captain had stressed the need for competitive rebalancing and led the movement to reduce the number of available points from 34 to 30 (in order to better hide his side’s relative lack of depth). “They have got some fire to go because it got so close. I remember when Seve [Ballesteros] lost the [1983] Ryder Cup and he went in the locker room, all the guys [on the European team] were down, and he said, ‘No, this is only one point we lost by! This we should be excited about!’ And I think that’s where we the International team and the Presidents Cup are right now.”

Last week marked the closest Presidents Cup since 2005, and whether or not the I-Nats left Incheon with renewed enthusiasm it was highly entertaining, with one Sunday match after another decided on the 18th hole. Soft-spoken Chris Kirk struck the loudest shot of the week, a 15-foot birdie putt on 18 that forced the Internationals’ Anirban Lahiri to roll in his own three-foot birdie putt in order to halve the match. But Lahiri missed — a carbon copy of Bubba Watson’s earlier miss on 18 to give Thongchai Jaidee and the Internationals a half point — tilting the match toward the Americans. In the anchor match, Bill Haas beat Sangmoon Bae 2 up for the clinching point.

It was good theater, but the P.C. could use another big change or two, starting with a spot on the schedule that doesn’t go head-to-head with college and pro football and the Major League Baseball playoffs. If you play an exciting Presidents Cup in the middle of the night amid a lot of other great programming — this year’s Cup was up against a pretty good U.S.-Mexico soccer game, in addition to all of the above — does it stand a chance?

Phil Mickelson, who started the week as U.S. captain Jay Haas’s hotly debated wild–card pick, finished as the brightest bright spot for Team USA with a 3-0-1 record. He also invented a new celebratory handshake with Zach Johnson; found a way to lose the same hole twice by breaking the event’s one-ball rule; boasted that Jason Day and Adam Scott still couldn’t beat Mickelson and Johnson despite the rules gaffe (no doubt giving the International team bulletin-board material); and let his teammates rub his belly for good luck. It was a zany, fun week, even for Phil.

But how many people saw it?

Louis Oosthuizen, who kept switching headwear on a rainy, cold Sunday, making him alternately resemble a bank robber and the Gorton’s fisherman, eagled the par-5 18th hole to salvage a half-point in his singles match with Patrick Reed and go 4-0-1 for the week. That was second–best to his foursomes and four-ball partner Branden Grace (5-0-0), who dusted Matt Kuchar 2 and 1 in singles. Good for them.

But if you find yourself in need of a conversation starter around the water cooler this week, you’d be safer mentioning those upstart Texas Longhorns upending the ninth-ranked Oklahoma Sooners, or Los Angeles Dodgers bad boy Chase Utley’s pseudo-slide into second base, breaking the leg of New York Mets shortstop Ruben Tejada.

Casual sports fans probably paid it no mind, but the revelation from this Presidents Cup was the power-hitting U.S. team of J.B. Holmes and Watson, who went 2-1-1. They didn’t even play badly in their only defeat, a Saturday four-ball loss to Grace and Oosthuizen that featured 19 birdies.

As for the format change, it’s unclear whether the closeness of this Presidents Cup owes to the reduction in points. Maybe the Internationals simply did what the Americans need to do in the Ryder Cup: play better.

The Presidents Cup will never be the Ryder Cup; it lacks the urgency and meaning of its more pedigreed USA vs. Europe counterpart. In other words, there probably is no kraken to unleash. But maybe the Presidents Cup doesn’t need a kraken. Let’s start with a new date and go from there.