The Open 2019: Tiger Woods is heading home early for a much-needed (and well-deserved) break from golf

PORTRUSH, Northern Ireland— He played the final holes in a spitting rain, with no chance to make the cut. Still, Tiger Woods was all in on every shot. That’s him, in eight words. The greatest grinder in the history of the game. His caddie, Joe LaCava, was still noting Saturday pin placements. You know golf people—they’re creatures of habits.

The fans, too. Woods approached the last green right at 3 p.m. and the grand horseshoe bleachers around it were closed to new arrivals. They sat under a low ceiling of gray but not on their hands, giving Woods the warmest of ovations, for his three Opens, for his Masters in April, for being 43 and still trying. Off came Woods’s baseball cap. Up went his arms, not in exultation, as we all saw in April, but in appreciation.

He’s going home. He’s not playing next week in Memphis, he’s not playing in Reno the week after that or in Greensboro, the week after that. The next time you’ll see him hit a ball for keeps will be on Aug. 8, in the first round of the first event of the three FedEx playoff events. Liberty National, followed by Medinah, followed by East Lake. The long rest for three straight begins. The real season is over, and it was a rousing success. Let’s do it in reverse chronological order: MC at the Open, T21 at the U.S. Open, MC at the PGA Championship, win at Augusta. A win at Augusta with his mother and kids waiting in the wings, 22 years after his first major title, won there, his father on the edge of the green. You can say he’s spent for eternity if you want, but a surer statement is that this guy confounds expectations. That’s in his DNA, along with that grind-it-out mentality. 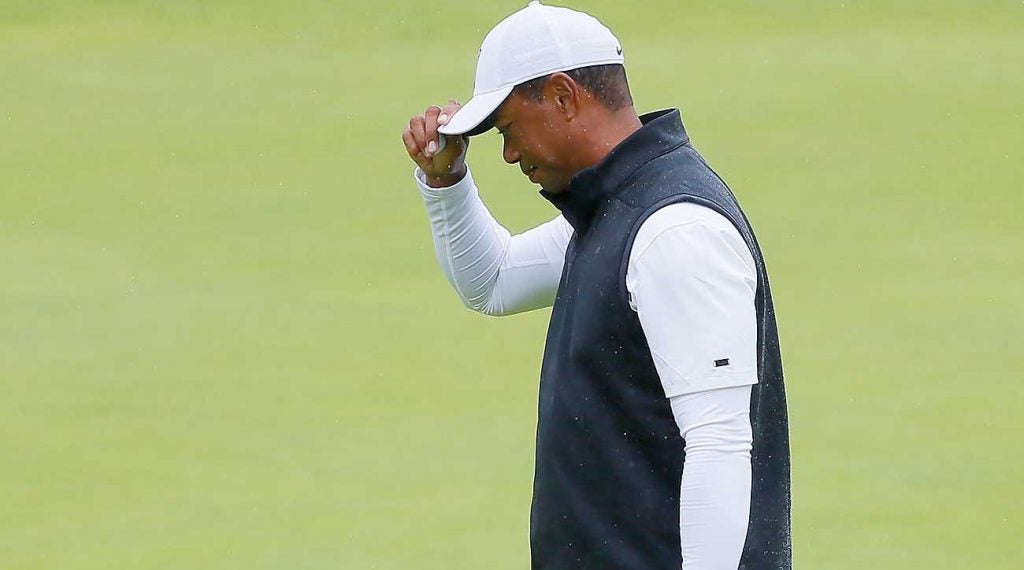 “I just want some time off just to get away from it,” he said. It is a rich word in this context: tournament golf and all it entails. The trips to press tents and the physio’s tables, to the practice range and the scorer’s trailer, to the wet rough, long and trampled, after another fore-right errant drive.

“I had a long trip to Thailand and then trying to get ready for this event, to play this event. It’s been a lot of travel, a lot of time in the air, a lot of moving around—different hotels and everything.”

Finally, and most tellingly, “I just want to go home.”

Woods, his workweek done, was asked to compare this period of his life with another, the years 2015 and 2016, leading to his last-chance fusion back surgery in April 2017. “You can’t compare the two—those were some of the lowest times of my life,” he said. “This is not. This is just me not playing well and not scoring well.” His speech was notably measured, like a Burt Bachrach LP spinning at 32 RPMs. Maybe he was just exhausted, mentally and physically. He might have shot 69 on Friday, but his long lag putt for birdie barely made it halfway to the hole and he closed with a bogey 5 for 70, 1 under. Really, after a Thursday 78, he had almost no chance to make the cut. But that doesn’t mean you don’t try. Woods was trying, just as David Duval was trying, just as Shane Lowry was trying. Lowry was hitting some sawed-off irons that brought to mind Woods at Hoylake when he won his third Open, weeks after his father died. He fell into Stevie’s arms first, Elin’s arms next, and balled like a baby. “I love playing in these events,” Woods said, speaking of majors in general and Opens in particular. “I love the atmosphere. I love the stress.”

Stress is on summer holiday now. As the man (B. Lurhmann) says, “Be kind to your knees. You’ll miss them when they’re gone.” Mark Steinberg and Glenn Greenspan joined Woods on a tented riser. The R&A man circled a wrap-it-finger to the gathered scribes. Woods was almost out the door when he said, “I’m going to have my hot weeks.” This was not said idly.