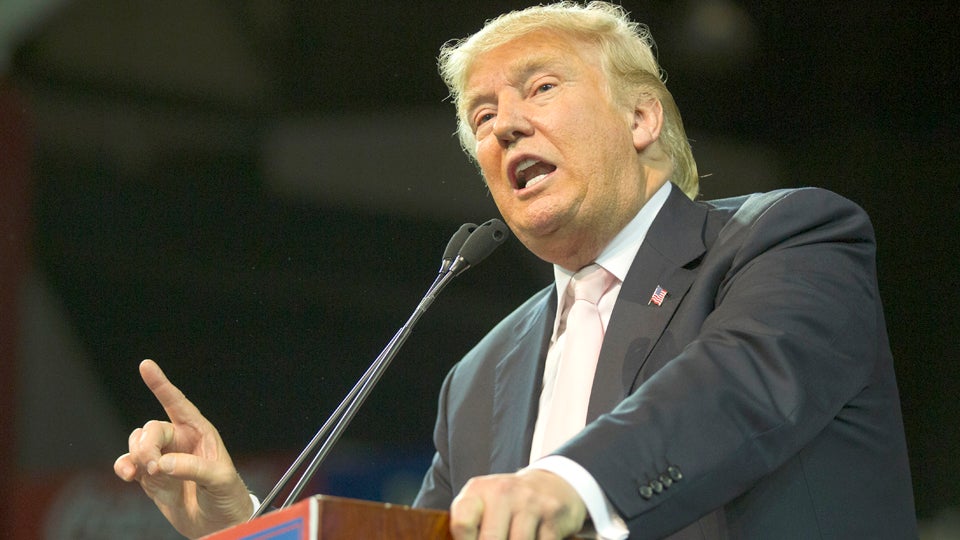 What could be a better time than playing golf with you? Not much! Thanks for all the fun rounds and interesting—and way-off-the-record—conversations we’ve had along the way, my man. You know what conversations I’m talking about. Remember, they cut both ways.

I so appreciate the membership you gave me at Trump National Westchester when Winged Foot was showing me no love. You know how to dole out a floating mulligan, brother! I might be the king of the do-over, but you’re at least a high prince. Anyway, your place is so much more fun than Winged Foot. Food’s better, too.

Maybe someday you’ll get a Tour event at Westchester. TV would eat up that waterfall on 13. You’re right: more magnificent than Niagara Falls. And what a locker room. Joe Torre, Rudy Giuliani, your pavement guy, you, me, all down the line. A murderer’s row.

MORFIT: Why the PGA Tour Should Dump Trump

That’s why I have such pain in my heart right now. Sorry, Donald, but I have to resign my membership at Trump Westchester. Don’t pay attention to my quotes in the press release going out today—we both know how those things go. Truth is, Hillary’s making me do it.

I tried to tell her that it’s an honorary membership, that it wasn’t costing us—or the American taxpayer—one thin dime. But she said something about “optics” and all the extra security needed when I play. When I told her regular people don’t care what rich guy belongs to what club, she put her hands on her ears and started wailing like a siren. Hillary’s smart as a whip, but she’s got that move. Plus, she’s kind of annoyed about some of the things you’ve been saying, like I’m “one of the great woman abusers of all time.” I know what you’re doing, but was that necessary? Anyway, you might find it useful to keep in mind this gem from Warren Buffett: “If a cop follows you for 500 miles, you’re going to get a ticket.” As you like to say, You understand. It’s actually looking like it might be you and Hillary in the general. After Election Day, you can go back to things you actually care about. If I can help when it’s over, let me know.

This one’s free: On November 9, after John King and Brit Hume put away their red-and-blue maps and magic fingers, you take a nice young pro from the Asian Tour named Mohammad Siddikur Rahman out for a round at Trump Doral. He grew up and lives in Bangladesh, found his way to golf working at a club in Dhaka, and he’s the best Muslim golfer in the world. You fly him to Miami on your plane, play 18 on the Blue Monster with him, and invite CNN, FOX and Golf Channel to follow along, right through lunch. People will quickly forget that ban-the-Muslims lunacy. I’m giving you a mulligan on that one.

Reading more tea leaves here (my hobby), I doubt you’re going to get a British Open at Trump Turnberry. The old bushy-eyebrow crowd at the R&A won’t get you, and the new, young, grow-the-game progressives there even less so. You have a better chance, but still remote, of getting a Ryder Cup at Trump Scotland. In theory it can be bought, though maybe not by you.

The really important thing for you now is to make sure you get the U.S. Women’s Open at Trump Bedminster next year, as you’re scheduled to do. No major blowups between now and Election Day and you’ll be fine. The USGA will take more of a hit from taking it away from you than by letting you keep it. And if that event goes well, your dream will come true: You’ll get the U.S. Open, men’s division. That’s the good news. The bad news is that it will be in 2027, at the earliest. You’ll be in your 80s, just like Hillary and me! But your whole golf business will get a lift from it, and that will be fabulous for your children and grandchildren.

And what about your next move? This campaign shows how good you really are at reality TV, so my advice is to stick with it. I’m thinking Extreme Makeover, Trump-style! You take a group of dead-end kids and give them the Trading Places treatment. You make them members at your clubs, you personally teach them how to talk, what fork to use, how to play golf, get them into Fordham or Wharton or what have you. Every week, one of the kids gets fired off the show by finishing last in some competition, but as a consolation prize the failed contestant gets to caddie for you. Just think about it.

Couple final things, for now, anyway. I know you’ll be tempted to share this letter with the press. Please don’t. Also, please consider my resignation temporary. If I’ve learned one thing in my nearly 70 years, this is it: It’s all temporary.

Best wishes to you and Melania,