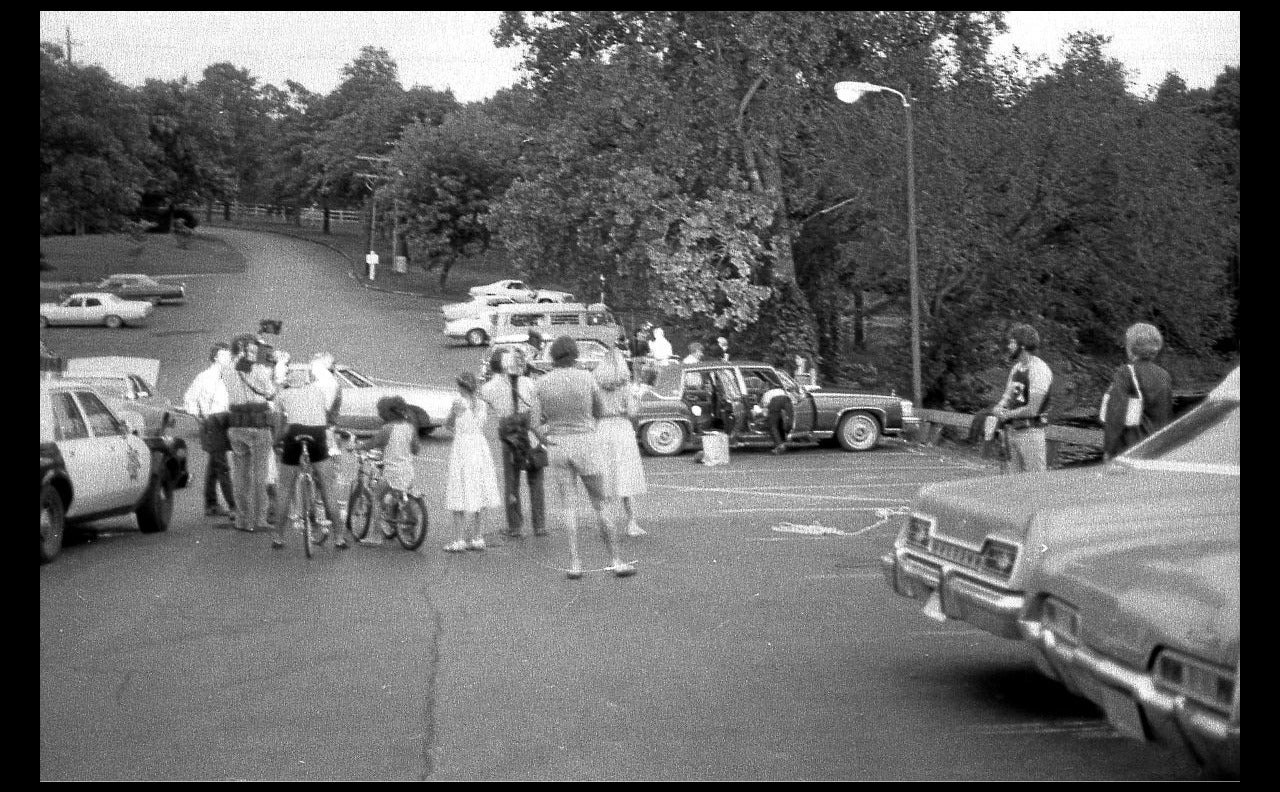 Media and bystanders gathered at the surreal site.
Tulsa World

Black Mass is a new movie about an old Irish-American mobster, James (Whitey) Bulger of South Boston, played by Johnny Depp with psychotic, see-through eyes and fast-twitch muscles he uses to murder people. About a dozen different men — and one drug-addicted female prostitute with loose lips — are gruesomely killed in the film’s 122 minutes, either by Bulger or on his order. But the film, much like the nonfiction book on which it is based, depicts one execution that goes far beyond the we’ve-seen-this mobster-on-mobster hit. That scene, a reasonable facsimile of an actual event that changed innocent lives forever, is the assassination of a businessman-golfer named Roger Wheeler in the parking lot of Southern Hills Country Club, in Tulsa, on May 27, 1981, after his regular Wednesday game.

The movie version, filmed at a Massachusetts country club, lasts barely a minute. In the film, as in real life, the private-club murder of a wealthy straight-arrow Midwestern entrepreneur leads to the demise of “Jimmy” Bulger and the corrupt FBI agents who supported him and his Winter Hill Gang. In the movie, you see an actor playing Wheeler making a late-afternoon walk with his clubs to his late-model Cadillac. His wooden woods — no headcovers — are exposed to the air and potential trunk denting. (Hollywood never gets golf quite right, does it?) Wheeler was a creature of habit, which made him easy for his assassins — assigned to the job by Bulger, who was given a free hand by the FBI — to track down. (Two men made the hit in real life but only one in the film.) Wheeler’s crime was that he had bought World Jai Lai, an East Coast sports league popular with pari-mutuel bettors, and had brought in people, including his son David, to try to squash skimming. Bulger didn’t like that. He was profiting wildly from the status quo.

“Dad must have joined Southern Hills in about 1963,” David Wheeler, now 63, told me the other day. His father was 55 at the time of his death. He could shoot in the 80s. “I caddied for Dad two or three times — my older brother, Roger Jr., was the golfer — and went to I guess you’d call it summer camp at the club. It was beautiful, with the swimming pool, the rolling hills of the course, these great trees. Centurion trees, I think you call them. It was so relaxed. There wasn’t a guard at the gate. Who would have ever thought that you’d need one?”

The game, as well as caddying, was bewildering to David Wheeler as a boy. Stand here; don’t stand there. Find the ball, but don’t touch it. “An interesting set of procedures,” he called it. His father was drawn to golf’s rules and nuances. Golf was his therapy. It reduced stress and slowed time. He liked the competition, the camaraderie, and, as David Wheeler loosely explained it, the tension of a $2 Nassau. Roger Wheeler, a self-made man who had been the chairman of Telex Corporation, became cranky if he missed a Wednesday afternoon at Southern Hills. “He had to have his weekly game of golf,” David said. “He lived and died by his schedule.”

The club was two miles from the Wheeler family home in Tulsa, a straight shot up Lewis Street. David Wheeler remembers the great Christmas parties Southern Hills put on during his boyhood — the big tree, the shiny lights almost out of a Fitzgerald story. His father’s death came during a heady time at Southern Hills, when the club hosted two major championships in a half-decade. The course at Southern Hills was designed by Perry Maxwell, who did work at Augusta National and Pine Valley, among the dozens of other courses he built and renovated. The 1977 U.S. Open at Southern Hills was won by Hubert Green (playing amid a death threat). The 1982 PGA Championship at Southern Hills was won by Raymond Floyd, who opened with a 63 in 100-degree heat. Among the other top-10 finishers that year were Greg Norman, Fred Couples, Tom Watson, Tom Kite, Lanny Wadkins and Jay Haas, this year’s U.S. Presidents Cup captain. Some era, some course and some place. Southern Hills was the quintessential American country club, Oklahoma-style.

Bob Randquist was the club’s young course superintendent then. Now he is at Boca Rio Golf Club in South Florida and is a former president of the Golf Course Superintendents Association of America. Randquist would sometimes see Roger Wheeler jogging on the course, just as he was reporting for work. “It was dark,” Randquist said in a telephone interview. “We would see just a glimpse of him.” He knew “Mr. Wheeler” and his wife, Pat, who remains at the club, but just well enough to say hi. They were, he said, beloved and respected members. Regarding Wheeler’s death, he said, “Things like that just don’t happen in Tulsa. The ’82 PGA Championship was a bittersweet time. The employees and members were shocked, but life goes on. There was no fear of something like that becoming a recurring act. It was a random act. There was no notion of it being mob-related for years.”

There are aspects to Wheeler’s death that remain a mystery, despite an obsessive devotion to the case by a Tulsa homicide detective, Mike Huff. The Bulger, and FBI, connections to Wheeler’s death only seeped into public awareness in the late 1990s, through different news accounts. If you are looking for a primer on Bulger and his profitable FBI relationships today, a good place to start is a six-page story in the Sept. 21, 2015, issue of The New Yorker. The headline is perfect: “Assets and Liabilities.”

David Wheeler suspected mob ties to his father’s death from the day it occurred but the investigating FBI agents, he said, showed no interest in his take on it. He has no plan to see the movie, which he is sure overstates Bulger’s role in his father’s death, even though Bulger ordered the hit. Wheeler believes elevating Bulger in the story serves to diminish the even bigger role of corrupt FBI agents and one former agent, H. Paul Rico, a former Boston office FBI detective who had become the head of security at World Jai Lai. As David Wheeler explains it, Mike Huff, the Tulsa detective, played a key role in Rico’s eventual arrest for Roger Wheeler’s murder. That occurred in Miami on Oct. 9, 2003. Rico died in a Tulsa hospital 13 weeks later, under indictment and, Wheeler said, murky circumstances.

In 2013, in a federal court before Bulger’s sentencing after 16 years of evading authorities, Wheeler said, “Shame on you Mr. Bulger. For all your notoriety, you were a punk. Enjoy your retirement. You’re a bag of jailhouse rags waiting to be stored on cold steel.” Wheeler is pursuing a federal lawsuit related to his father’s murder. He is also writing a book about his father’s death. In court that day, Bulger turned his back to his victim’s son. “I’ve never made eye contact with him,” David Wheeler said.

He never became a golfer. “I don’t know why,” he said, but it’s not hard to guess. In his mind’s eye — in the movie in his head — he still sees Southern Hills in all its splendor. But real life is different.

“You drive up the road to the country club, you’re getting to my dad’s murder scene,” he told me near the end of a long conversation. “That’s a ghost for me.”