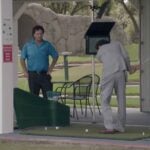 Borat pays a visit to a driving range.

So much for growing the game in Kazakhstan.

For golfers who are big on Borat, the fictional Kazakhstani reporter played by the fearless prankster, Sacha Baron Cohen, this has been a week of great anticipation.

Trailers for the new Borat movie, which is scheduled for release today on Amazon Prime, featured an especially tantalizing snippet of the title character trying his hand at golf.

Wah-wah, wee-wah, as Borat would say.

Like so much else in the Borat oeuvre, the golf scene was filmed in under-the-radar fashion —- so discreetly, in fact, that even the owner of Golf Center of Arlington, the Texas facility where it was shot, didn’t have the scoop on what was going on.

“I never saw [Borat],” Mauricio Galante told the Fort Worth Star-Telegram. “Had no idea who it was. They were so secret. My wife thought they were making [an adult entertainment] movie or something.”

When the trailer hit the internet, Galante, a self-proclaimed Borat fan, was gobsmacked.

As were many in the golf world.

Amid other scenes of absurdist mischief, the trailer shows Borat, in his trademark outmoded and ill-fitting suit and tie, smacking balls from a hitting bay, and then, to the dismay of his instructor, running out onto the range in pursuit of his own shots.

When GOLF.com contacted Galante to inquire about the identity of the instructor, Galante said, “I’m almost positive he was an actor. I know everyone in golf around here, and I’ve never seen that guy before.”

A spokesperson for Amazon Studios told GOLF.com that details about the scene were not available.

What was made available to GOLF.com earlier this week was a sneak-preview of the entire movie, Borat Subsequent Moviefilm: Delivery of Prodigious Bribe to American Regime Make Benefit Once Glorious Nation of Kazakhstan.

It is, unsurprisingly, the cinematic essence of outrageousness, filled with laugh-out-loud and cringe-inducing moments.

But there’s also this dispiriting news: the golf scene was left on the editing room floor. It did not make it into the finished version of the movie.

Images of Borat playing the grand old game exist only in the trailer (the scene begins at the 2:18 mark), the entirety of which you can watch below.