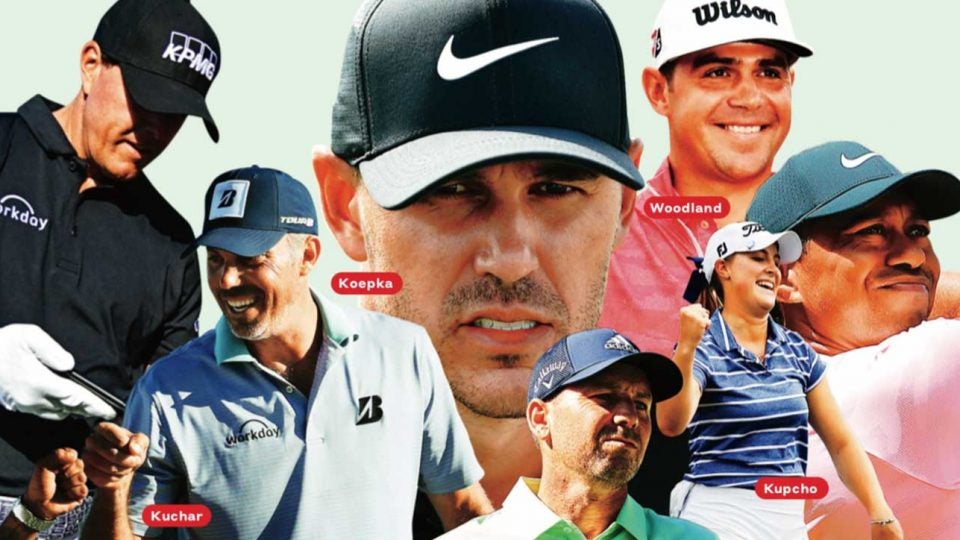 Celebrate artistry in golf from benign to bizarre with the 2019 Shippys.
Getty Images

What a year it was for golf, from the sublime to the ridiculous. In fact, 2019 was so memorable it deserves its own set of awards, so we’ve created the annual Shippys. And the game will never be the same.

Matt Kuchar. The formerly bland veteran was a headline writer’s dream in 2019, and only nominally because Kuch had a career year between the ropes. The controversies were vast and varied, most memorably his stiffing of the caddie El Tucan (you can’t make this stuff up) after their victory together in Mexico. Throw in a couple of rules kerfuffles and a delicious non-gimme at the expense of Sergio Garcia at the Match Play and Kuchar was at the center of many of the year’s juiciest stories.

Honorable Mention: Phil Mickelson. Winning the Crosby Clambake at age 49 was nothing compared to the splash Phil the Thrill made by finally embracing social media. For decades Mickelson has been a preeminent smack-talker in practice rounds, locker rooms and press rooms, but he finally put it all out there for the world to see.

Antihero of the Year

Brooks Koepka. The World No. 1 has turned into Thanos in spikes, and not just because they share the same jawline. Koepka’s slog to world domination has been remarkably joyless, fueled by perceived minor grievances and open disdain for the “golf nerds” he counts as colleagues. Hey Brooks, you’ve made it to the mountaintop. Try to enjoy the view!

Honorable Mention: Sergio Garcia. No bunker, green or tee box was safe when El Niño unleashed his fury at, uh, well, we’re not really sure why he’s so angry all the time.

Shot of the Year

Gary Woodland’s delicate pitch from the fringe front-right of Pebble’s 17th green to the back-left pin position. This deft up-and-down iced the U.S. Open and proved that Woodland is more than just a slugger.

Honorable Mentions: Tiger’s fairway bunker shot during the second round of the WGC-Mexico City, when he bent a 9-iron around a towering tree, uphill, into the wind, and spun his ball across the green for a kick-in birdie. Pure artistry. And Jennifer Kupcho’s sweeping draw with a hybrid on Augusta National’s 15th hole for the kick-in eagle that helped propel her to victory at the inaugural Augusta National Women’s Amateur, which was a home run thanks to her gutsy play and wondrous sportsmanship, and the mega-talent she vanquished: Maria Fassi.

Worst Shot of the Year

Rory McIlroy’s opening drive at the Open Championship, which hooked out-of-bounds, sending a shiver down the spine of the golf world. McIlroy’s 79-65 at Portrush was symbolic of a year during which he played a lot of great golf but, in this writer’s mind, struggled when it mattered most.

Razorback alum John Daly canceling Walmart, another Arkansas institution, on Twitter after complaining about “lazy” staff and how the store he visited had only one open checkout lane. Or maybe they just failed to provide a motorized cart?

Same here! 1 line open, lane 13 while 4 of them stood around talking telling us to self checkout! So, I self checked out with over 100 items just to have fun with it and tie those up too!

Putt of the Year

The 6-footer by Suzann Petterson on the final hole to win an epic Solheim Cup for Europe. It’s the kind of putt that even a golfing machine like Bernhard Langer found overwhelming, but Pettersen—a controversial captain’s pick because she had taken the preceding year off after giving birth—hearted it and then punctuated the moment with a mic-drop retirement announcement.

Round of the Year

Shane Lowry’s Saturday 63 to seize control of the Open Championship. This electric performance was a monument to Lowry’s skill set: booming drives, creative shotmaking, deft touch around the greens and deadeye putting. The singing of the delirious fans from all corners of the Irish island that carried Lowry home was the most unforgettable soundtrack of the year.

Honorable Mentions: Haotong Li making four eagles during the second round of the Saudi International, and only one of them on a par 5! He holed two approaches on par 4s and then drove the green (and nearly aced) the downwind, 388-yard 17th hole. Also, McIlroy going out with the 54-hole lead at the Canadian Open and then stalking a 59 before settling for a 61 and a blowout win.

The inaugural playing of the Saudi International. While the Kingdom was engulfed in controversy over the murder of Washington Post reporter Jamal Khashoggi, the European Tour blew into town with great fanfare, thus allowing many top players to scoop up huge appearance fees. Patrick Reed partook of an awkward photo op at an elementary school and Bryson DeChambeau went on TV to enthuse that the tournament was “amazing.” Guys, next time just be honest and say, We don’t care how violently oppressive the host country is as long as the check clears. Bonus points to McIlroy and Paul Casey for willfully boycotting the tournament.

DeChambeau… again. He became the poster boy for the slow-play scourge after a Zapruder-like video surfaced of The Professor agonizing for more than two minutes to take (and miss badly) a routine 10-footer. Instead of begging for forgiveness, DeChambeau blamed his pace of play on other caddies for their slow walking. He then got into a war of words with, and then confronted, Koepka—a bad idea on both fronts; insisted that data proves he’s not a slow player, but failed to supply said data; posted a defiant video on Instagram pronouncing, “So screw all y’all haters, no big deal.” Apparently the one thing Bryson does quickly is burn up goodwill.

Slow play affects the quality of the game for both players and our fans and I’ve always had the utmost respect for my playing partners, including JT and Tommy. I’m constantly trying to improve and I will do my very best to improve my pace. Golf is my passion and livelihood. It’s my responsibility to help improve the game to be more enjoyable for all. Pace of play has been an issue for golf at all levels for a long time, and I'm committed to being a part of the solution, not the problem. I want to be a good representative of the game and the @PGATour and I looking forward to working with the TOUR and fellow players to find a solution to slow play.

Brandel Chamblee calling Koepka’s diet for a semi-nude photo shoot “the most reckless self-sabotage that I have ever seen of an athlete in his prime.” Chamblee’s turgid monologues make him must-watch TV, but this pronouncement, during Masters week, looked rather limp when Koepka nearly won the event and then took the PGA Championship a month later. Koepka posting on social media a photo of Chamblee wearing a clown’s nose was a chef’s kiss.

Twitter feuds. From Justin Thomas’s war of words with the USGA to Joel Dahmen saying Sung Kang “cheated” to various pros ripping DeChambeau for his pace of play—golf beefs have never before been so public. It’s undeniably entertaining for the rest of us but doesn’t exactly burnish the image of the gentlemen’s game.

Cam Champ at the Safeway Classic. After a year marred by injury and middling results, Champ produced an inspired performance as a tribute to his grandfather Mack, who taught him the game and had recently begun hospice care after battling lung cancer. The tearjerker restored Champ’s standing as a phenom but more importantly was a window into the soul of an otherwise buttoned-down competitor.

Honorable Mentions: Charles Howell’s victory at the RSM Classic, his first in nearly a dozen years, punctuated by his joyful embrace with his kids; and Nate Lashley’s win at the Rocket Mortgage Classic, 15 years after his parents and girlfriend died in a plane crash. Lashley’s victorious hug with his sister will long linger.