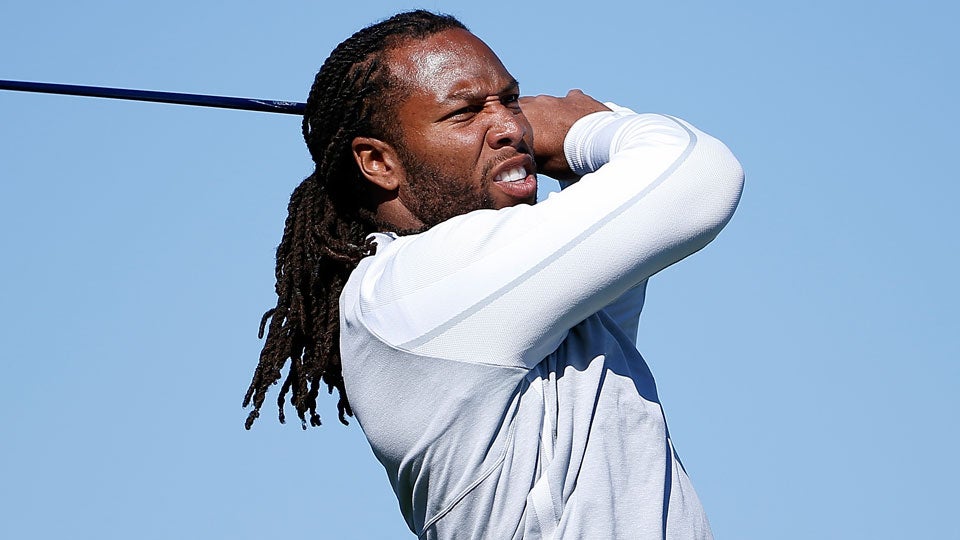 Larry Fitzgerald tees off on the 15th hole during the pro-am before the 2016 Waste Management Phoenix Open.
Getty Images

The Cardinals’ nine-time Pro Bowler, 32, on playing with Tour stars in pro-ams, which footballers are good sticks and when he might trade cleats for tee times—for good. Fitzgerald will play in the American Century Championship on July 19-24 at Edgewood Tahoe in Nevada.

How did you pick up golf?

My father has played golf for the last 35 years, so I was exposed to it, but being from the inner city [Minneapolis], I gravitated more towards basketball and football. My former teammate Andre Roberts pushed me to get out there. I hit a couple good shots and that’s all it took. I’ve been hooked ever since. It’s just so nice to go out there and walk 18 holes and do something that’s not stressful, just enjoy the sunshine on your face, see your game improve, be there with your friends, maybe talk a little trash after the round.

It pisses me off that I’ve been here for three years and I’ve only been playing golf for a couple of them. What have I been doing with my free time? In Arizona, I like Whisper Rock, Paradise Valley and Mesa, and back home in Minnesota, I play Hazeltine, Interlachen and Spring Hill.

And how are you hitting it these days?

I’m a 13 handicap now, but I’m a really scary 13. I’m about a 20 off the tee, but probably a 5 from 150 and in. When I was learning the game, the first guy I went to was Andrew Getson, and we worked on short stuff. He said the fastest way to improve is being good with your wedges and your putter, so when I’m at the range, that’s what I’m working on.

You’ve been a staple at some of the big pro-ams in recent years. Any special memories?

Pebble Beach was amazing. I played with Kevin Streelman, another Whisper Rock guy. I had never played with a Tour player while they were actually competing. I’m a fast player. I hit my ball and get my [yardage] and have my club ready to go. I just wanted to make sure I was staying out of his way. It didn’t help seeing him hit it 300 down the middle. It’s an experience I’ll cherish for the rest of my life. hat’s what makes that event so special. You see these big time celebs with their hair down, relaxing, just being down-to-earth guys.

Who would be in your dream foursome?

You’re signed through 2016. Have you thought about retirement?

Oh yeah, that’s something that you always think about and have to be ready for at this age. You never know when that time will come for you. You can get retired at any moment, so you have to prepare yourself and save. But right now, I’m just focused on the upcoming season and trying to improve. I’ll have to see how I feel after this year.

What other athletes are sporting some serious golf game?

My teammate Patrick Peterson is a heck of a player when he puts the time in, but his game has kinda fallen apartof late. He just had a baby girl, which hurt him a little bit, so I’m hoping he has another baby soon. [Laughs] I’m hoping he gets twins!