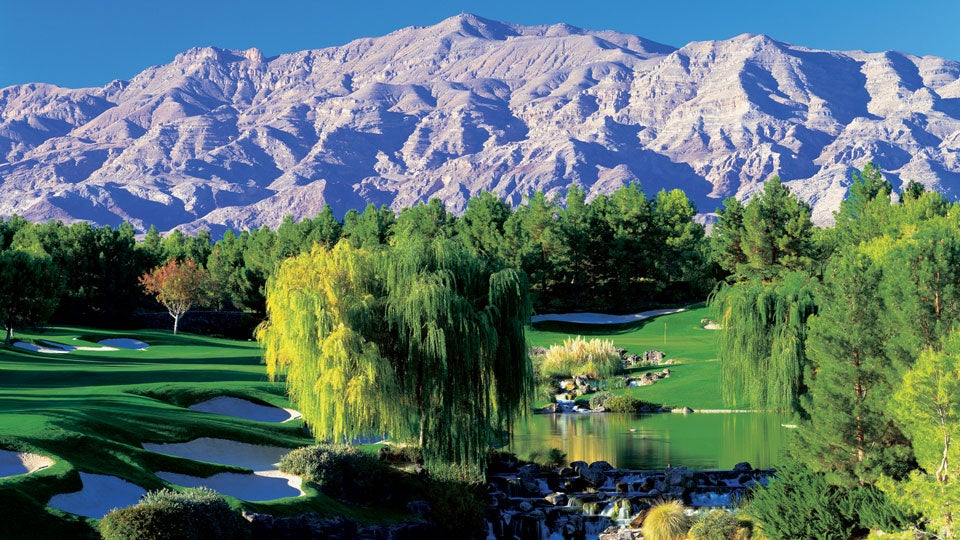 The home hole on the lush design at Shadow Creek, in Las Vegas.
John and Jeannine Henebry

Gamble enough in Las Vegas and the casinos will comp you just about anything: rooms, dinners, airfare, show tickets, even a round at the city’s most exclusive course, Shadow Creek. The famously lush Tom Fazio design is open to the public (green fees are $500 and you must be in residence at an MGM property), but wager enough on the tables and you’ll get the royal treatment. Here are nine perks Shadow Creek awards to the highest rollers.

No one arrives at Shadow Creek in a Toyota (even regular, 25-cent-slot-playing Joes). Your mode of transport is a stretch limo. You’re told not to be late for pickup and at the appointed time your ride glides up to the VIP side entrance at the MGM Mirage. The driver hops out to open the back door, assisting you into an interior long enough to practice eight-footers on the way to the course.

After being greeted at the front door of the clubhouse, you’re ushered to the locker room, where the first thing you notice is the names on the lockers. Take your pick as long as its owner is not on property: Barack Obama, Bill Clinton, George Bush (41 and 43), Derek Jeter, Tiger Woods, Michael Jordan, George Clooney, Paul Azinger, plus a couple dozen nameless/faceless whales, including one deep-pocketed regular coined “Moby Dick.”

Greens fees? Try greens free. “Whales,” or those guests who have established a six-figure line of credit at the MGM properties (such as the Aria, pictured), can expect a free ride at Shadow Creek. According to a club source, whales comprise 75 percent of the 25-30 rounds on a busy day.

Great clubs have great caddies. Those in the know ask for “Stick.” A classic bagman, he’s been there 25 years since the course opened and has turned down multiple chances to loop on the PGA Tour, because he didn’t want to travel. He also doles out plenty of sage advice, like, “Start drinking water early if it’s hot here, because even I can’t help you when you stop sweating,” or “If you’re drinking heavily on the course in the heat, just let me know what hole you want to be picked up on, because there’s no way you’re making it to 18.”

Great clubs also have great stories. Shadow Creek has produced volumes of them, including tales of seven-figure bets and players marking their balls with $100,000 casino chips. The best tidbit overheard during a recent visit: “I could have told you Tiger would struggle at the U.S. Open. He did a clinic here three weeks before and he couldn’t hit it straight to save his life. That’s with a dozen clients and no pressure. He had no chance at Chambers Bay.” [Note: Woods shot 80-76 at Chambers and missed the cut by 11 strokes.] The Shadow Creek Burger in the grill room is a must-try, but if you want to be like MJ and his pals, you can have sliced fruit of all varieties sent out to the course, iced, in plastic zip lock bags. His Airness is the ultimate golf junkie: He doesn’t even stop for lunch. Upon request, guests also can have their carts stocked with more lavish offerings: caviar, chilled lobster, champagne, you name it.

If you’re a high roller, a sports star or Leader of the Free World, you’ve likely played Shadow Creek. Bush 41 played Shadow Creek a dozen times and keeps a fishing pole in his locker. The most recent presidential visit might have been the most interesting. In town for a convention last fall, President Obama teed it up with the recently retired Jeter. The Captain and the Commander in Chief—oh, to be a third in that group.

There are member-guests and then there is the Shadow Creek Member-Guest. The club technically doesn’t have dues-paying members, but every October the biggest spending Whales are allowed to invite a guest to Shadow Creek for a two-day tournament where no expense is spared.

OK, so Butch Harmon doesn’t teach at Shadow Creek, but he is based just 25 miles south, at Rio Secco Golf Club. Tiger Woods will probably never do the sensible thing and reunite with his old guru, but high rollers can employ Harmon’s services. He and his staff conduct regular clinics with a wide variety of clients, and for a cool grand you can book a private one-hour lesson with Harmon himself. Whale rates vary.