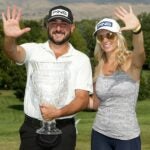 Tyler Strafaci and Jim Herman nabbed the headlines last week with their respective unlikely wins, but there were other storylines happening in golf. Here are three stories you might’ve missed.

Stacy Lewis claimed her 13th career LPGA Tour title Sunday as she won the Laddies Scottish Open in a four-person playoff. The win is the first in nearly three years for the former World No. 1. But it didn’t come without its challenges. Being grouped with Azahara Munoz and Jennifer Song during the final round, the pace of play was so slow that Lewis resorted to singing songs to herself in between shots to keep her mind occupied.

“I think having a kid has brought me some more patience,” said Lewis, who has an infant daughter, Chesnee, at home. “The patience was tested today. There were moments there on the back nine where I wanted to go at pins but knew I couldn’t. So I just — I really just tried to wait for my opportunity and just kept hanging in there.”

The playoff win is the first in Lewis’ career. She owned an 0-3 record in extra holes previously.

Stephan Jaeger closes in on history

Stephan Jaeger made history on the Korn Ferry Tour last weekend as he won the Albertsons Boise Open, his fifth career title on the PGA Tour’s top development circuit. The win makes him the 13th person to earn five wins on the KFT and puts him two wins behind Jason Gore’s all-time record of seven.

“Obviously I was on [the PGA] Tour last year and I want to win one of those,” Jaeger said. “But I’m on the Korn Ferry Tour this year so I’m going to try and win as many as I can by next August.”

While Jaeger has just 11 top 10s in his career, he’s been stellar converting when in contention. And that conversion percentage will have to stay high if he hopes to catch Gore and pen yet another entry in the KFT record book. Jaeger also owns the 72-hole scoring record (30-under 250) and single-round scoring record (58).

With the win, Jaeger has also positioned himself well to secure one of five U.S. Open exemptions up for grabs during the three-event Korn Ferry Tour Championship Series.

“It would be awesome to play in the U.S. Open because I could see Jason Gore and try to beat his record,” Jaeger joked. “Playing in the U.S. Open would be great, but it’s kind of icing on the cake after this win.”

Kirk Triplett had a new insignia on his bag at the Senior Players Championship with a simple message — Black Lives Matter. With the message on his bag, Triplett became the first Tour player to openly support the social justice movement on their clothing or bag.

For Triplett, who has a Black son, the movement is personal. He felt it was important to share the message.

“This seems like a good venue where maybe this message maybe doesn’t get spread as much,” Triplett said. “That’s a conversation that I think for people around golf, it just doesn’t hit home.”