Oh, the drama! Stage set for final act of a Presidents Cup for the ages

This is happening, people. This is a thing. The Presidents Cup concludes on Sunday at Royal Melbourne, with 12 singles matches. The course is fast, firm and furious. It has been a star. The Americans, despite all the big sticks on their roster, trail by 2 points. With the time difference, the action will play out in the U.S. all through Saturday night and spill into the wee small hours of Sunday morning, if you’re watching on your East Coast TV, as this reporter is. By the time the flags are raised and the final bro hugs are hugged, this will almost surely go down as the most interesting Presidents Cup ever played.

If Ernie’s International team wins, ordinary golf fans, in the United States and around the world, will see the win as some sort of moral victory. Not so much over the Americans, but over soft-and-wet American-style golf and over Patrick Reed and what he represents.

If Tiger’s U.S. team wins, it won’t be a statement about Patrick Reed at all. The Americans will have won despite Patrick Reed and all the unnecessary and bizarre distraction he has brought to this 13th playing of the Presidents Cup. An American victory will be all about Tiger Woods, the playing captain. It will be about the astounding quality of his play, at age 43, and much more than that, too. A comeback win by the American golfers will cap off the most extraordinary year in Woods’s career and will be the ultimate thank-you the players can give Woods for elevating their game. Every last one of them, though in different ways, came up on Tiger Woods.

He’s going off first in the finale, at 6:02 p.m., Eastern time, or 3:02 p.m. for you West Coast viewers. He’s playing Abraham Ancer of Mexico. Maybe you don’t know much about Abe Ancer. Let’s sum up the quality of his play and the quality of his character in a half-sentence: He will absolutely not be intimidated, playing a global icon. 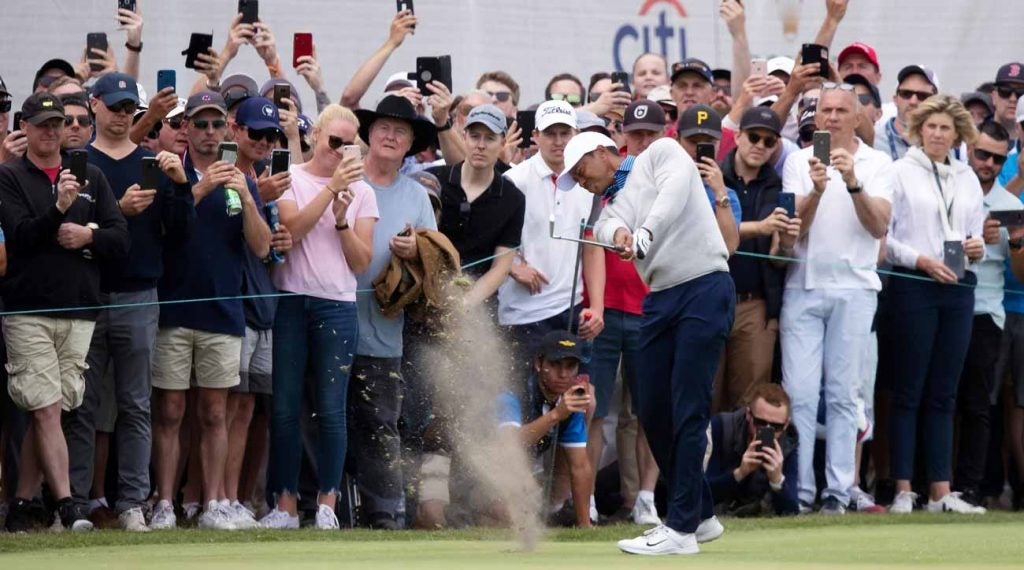 Tiger Woods could be playing in his last competitive round in Australia.

On paper, you would of course say that Woods has the edge here. But you know what Adam Scott says about that, that the matches are held on grass. Well, grass and sand, at Royal Melbourne. Tiger, after not playing at all in the long dank Saturday, should be tanned, rested and ready. His whole career has been about, to borrow his father’s phrase, letting the legend grow. He should be able to eke out win here. That gets the U.S. to 9.

But two matches later, Reed faces C.T. Pan. You could not have two more different people. Pan is slight, unassuming, not brash but, much like Ancer, not easily intimidated. He should win, which gets the Internationals to 11.

In the following match, Dustin Johnson, veteran American, plays the Chinese golfer Haotong Li, an International team rookie. Li has it all, except experience and strut. Johnson should win there, which would get the U.S. to 10 points.

In the penultimate match, Justin Thomas, who is playing for Woods and his example more than anybody else on the team, should be able to beat Cameron Smith. That gets the U.S. to 11 points.

Suddenly Ben An versus Webb Simpson looks like the most important thing in world golf, at least this weekend. That match features a U.S. Amateur winner (An, in 2009) playing a U.S. Open winner (Simpson, 2012). Simpson surely volunteered to play with Reed. They played three times together and lost three times. Losing begets losing, except when it doesn’t. So, who knows?

Who but a mother or a coach — an Ernie, a Tiger — could have a strong feeling for predicting the outcome of any of these matches?

Tony Finau of Salt Lake City versus Hideki Matsuyama of the Internationals?

Bryson DeChambeau of Dallas versus Adam Hadwin of the Internationals?

Gary Woodland of Topeka versus Sungjae Im of the Internationals?

Patrick Cantlay of Los Alamitos, Cal., versus Joaquin Nieman of the Internationals?

Xander Schauffele of San Diego versus Adam Scott of the Internationals?

Matt Kuchar of Sea Island, Ga., versus King Louis Oosthuizen of the Internationals?

And Rickie Fowler of Jupiter, Fla., versus Marc Leishman of the Internationals?

In 2003, the Presidents Cup was played in South Africa. Gary Player was the captain of the International team and Jack Nicklaus was the captain of the American team. In that era, there were 34 points at play and the Sunday ended in a 17-17 tie. Ernie Els had defeated Tiger Woods in singles. The two captains decided to send these two most famous players out for extra holes. They played three holes and tied three holes. The sun set. The match was called a tie. Gary Player has called it the best golf event of his lifetime.

The spirit of that match was completely, completely rooted in competitive grace. At least, by its end it was. That was, to date and by far, the best Presidents Cup. We don’t know how this one will end, in terms of score or anything else. If it’s left to Ernie and Tiger, following the example of Gary and Jack, it should be fine, if not better than that. One way or the other, this could be the most memorable one yet.