In three weeks, all eyes will be on Des Moines, Iowa, as the United States Solheim Cup team attempts to defend its 2015 title in front of a home crowd. It’s a lot of pressure to put on players, especially given Europe’s too-little-too-late push in Germany two years ago, and Team USA captain Juli Inkster is just fine with that.

Speaking to reporters in a pre-tournament conference call, Inkster said she’s excited about the options for her captains picks, which she’ll select after the Women’s British Open in two weeks. She will likely rely on a mix of veteran leaders and talented rookies to keep the cup.

“Believe me, I’m watching,” Inkster said. “We’ve got one more big major that a lot can happen. I’m not necessarily saying that anybody that wins the British, or plays well in the British, that comes up from the back I’m going to take, because the British Open course is always a lot different than a Des Moines golf course. But you’ve got to look at the people that are playing well right now, and I’ve got a nice list. I’m pleased where my players are, and how they are fighting to make that team. I’m a very happy captain right now.”

Despite her confidence, Inkster is fully expecting to get Europe’s best shot.

“Europe plays well away,” Inkster said. “I mean, they play with a little chip on their shoulder, which I try to get my team to do. But I do think that my team’s going to have to really step up to the plate and be able to handle the pressure that comes with playing at home.”

For European captain Annika Sorenstam, that chip is even larger given the drama of the 2015 Saturday fourball match that saw Suzann Pettersen and Charley Hull refuse to concede Alison Lee’s 18-inch putt. which led to a penalty and some hard feelings. The Europeans won that match, but the U.S. took the cup. Sorenstam is currently leaving the players to their own devices as they play LPGA events, but it’s definitely on her mind. 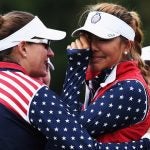 You may also like Europe takes controversial 10-6 lead over U.S. going into Solheim Cup singles

“When that week is there, I will address it with the team,” Sorenstam said in a separate conference call. “I’ve always been open and connected with Suzann, so we will have that conversation with her if she feels like we need to have it, but I’m not going to bring things up there if it’s not an issue to her. I think if somebody can move on, it’s Suzann. You know, she’s very tough mentally.

“It will be interesting to see how the crowd reacts, and hopefully we all can move on, even the spectators, and just look at this year as this event, and nothing else.”

If it’s anything like the 2016 Ryder Cup, the pro-U.S. Midwest crowd will not disappoint. Both captains are looking forward to staging the event in that part of the country.

“Right now, if I were to take a couple girls that are probably rookies, I need would some veteran leadership on that team,” Inkster said. “I think it can get a little overwhelming, the Solheim Cup, especially in Des Moines, where we’re going to have huge crowds.”

“I’m expecting it to be probably the most-attended Solheim Cup ever,” Sorenstam said. “I just feel like the Midwest loves their sport. My husband, Mike, is from there, and I know how crazy they get. I just visualize something really, really big, and it’s exciting.”