So Yeon Ryu of South Korea Is Focused on LPGA, Not Olympics 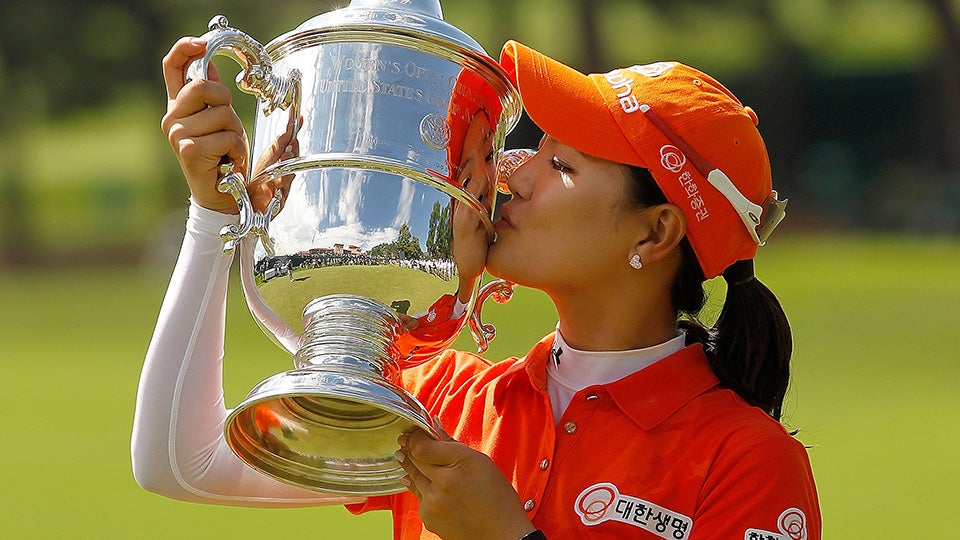 So Yeon Ryu of South Korea poses with the trophy after winning in a playoff against Hee Kyung Seo of South Korea during the final round of the 2011 U.S. Women's Open.
Mike Ehrmann

South Korean So Yeon Ryu has made a mark during her four and a half short seasons on the LPGA Tour. The 2011 U.S. Women’s Open champion has three LPGA wins and has finished in the top-10 eight times across the five major championships. Currently 11th in the world and behind four other Koreans, she has her work cut out for her if she wants to represent her country in the 2016 Olympics. But she’s on her way: Ryu has made 40 straight cuts, including all 25 events she played in 2015.

What was your favorite memory on Tour last year?

Two thousand fifteen was my fourth year on the LPGA, and it was really fun. My favorite memory from 2015 was playing the Ricoh Women’s British Open at Turnberry, and at the same time I was able to see my best friend Inbee [Park]’s grand slam.

How would you grade your performance in 2015?

B-? You didn’t miss ANY of your cuts last year!

I think that even with inconsistent shots, I love to play golf. It helps that even when I play really bad, the next day, I tell myself, ‘This is my thing, I know how to play golf.’ And of course my fellow competitors help me out so much — when we’re talking on the golf course, we’re just like teenagers, we have so much fun. I would say my positive personality makes me play better than what [my inconsistencies] have shown.

Does being so friendly change the competitive atmosphere on the LPGA?

It’s definitely tough, but we know that golf is a gentleman’s sport and we know what sportsmanship is. On the golf course, we help each other, but when we’re in contention, we have to be a little harsh to each other [laughs]. But even after that, we really understand each other so that when someone wins we can have a big congratulations with all of our heart. It’s one of my favorite parts of the tour: We have great friendships, great sportsmanship and great love on the LPGA.

What impact will the Olympics have on golf, in your opinion?

To be honest, golf is still not a popular sport compared to soccer. I hope [golf] becoming an Olympic sport will have more junior golfers play. The coolest thing is representing your country, so I think it’s really great to have women’s golf back in the Olympics.

It’s going to be a race for both the Americans and Koreans to make their respective Olympic teams. What are you going to do to prepare?

I think if I really focus on winning tournaments and playing well in LPGA events, I’m automatically going to make it. I’m trying not to think about the Olympics.

It’s also really important to have an idea about what the golf course looks like and how to prepare my body condition for the Olympics. So there’s no real goal, other than just being prepared.

How will you help promote women’s golf?

I would say PGA and LPGA golf is very different. First of all, the men are really powerful and hit really long. But we have a pretty swing! And we know what the fashion is like. If you look at the girls, they all look really sharp and colorful. [Laughs] But the biggest thing is that our swing is more similar to amateurs and they can learn so many things from how we play. Our distance, swing tempo, swing speed are all similar to them. If somebody wants to learn something [about golf], I would say the LPGA is definitely something you need to watch.

What’s something you’ll take away from your experience on the LPGA Tour?

The friendship, definitely. Two or three years ago, I was planning to film with one of the really famous actors in Korea, and actors there are normally really skinny, pretty, so I was going to go on a diet to lose weight. And I went to dinner with my friends on tour and just ordered salad. I think it was Morgan Pressel, she asked me, ‘So Yeon, what’s wrong? Why are you just eating salad?’ I told them I was filming with a pretty actress and wanted to lose weight and not look this big. Everyone started to get really mad! They all said, ‘That’s her job. Our job is to play golf. You’re already pretty, just be yourself and don’t compare to anyone.’ I think that was a great lesson for me, and I learn so many things from my friends on tour — that was just one. The spirit is just really great out here.