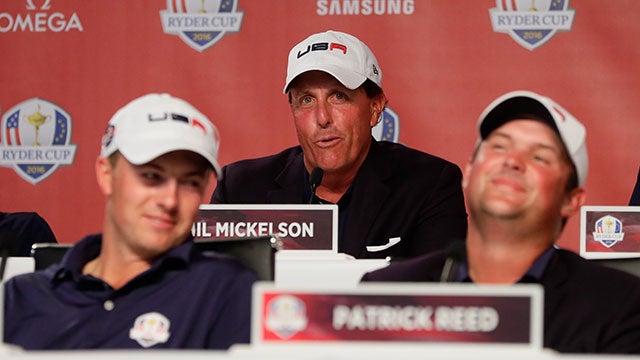 CHASKA, Minn. – Two years ago at Gleneagles Phil Mickelson sat on the far right side of the dais as the losing 2014 U.S. Ryder Cup team met the press. It was from that seat, with five players between himself and captain Tom Watson, that Mickelson carefully and meticulously picked apart Watson’s captaincy.

On Sunday night at Hazeltine, in the winner’s press conference for the U.S. team, the shift was apparent and the transformation was complete. Mickelson was center stage, next to captain Davis Love. There was buzzed laughter instead of passive-aggressive comments with a shiny trophy passed around instead of blame.

There is no doubt that Mickelson went down with the ship in that infamous press conference at Gleneagles. (When asked of the added pressure on him this week, Mickelson coyly said, “The pressure started when some dumbass opened his mouth two years ago.) Likewise, there is no doubt that’s precisely what he intended. Mickelson does nothing off the cuff; he knew the ramifications of what he was doing and the consequences it would have for future U.S. Ryder Cup teams, as well as for himself.

In his mind, blowing the whistle was worth it. That much was evident by the pure joy on his face as he showered fans with champagne at the closing ceremonies, even pouring some directly in Jordan Spieth’s mouth.

In the two years since the last Ryder Cup, Mickelson has been the galvanizing force in a gut renovation of the U.S. approach to this event. He was one of the founding members of the 11-man task force created to direct more energy and resources to the team. As a part of that group, he was instrumental in choosing Love as the captain of this year’s squad.

He, alongside vice captain Tiger Woods, banded together to put more emphasis on winning the Cup than they ever did as team anchors in the 2000s. Mickelson organized his Tuesday matches in the last two seasons with one eye toward this week. He wasn’t the captain, or even a vice-captain. He was the wise man, the leader, the alpha. For his entire career, Mickelson has been mentioned second behind Woods. This week Woods stood behind Mickelson on the range with a walkie talkie as Mickelson prepped for his opening foursomes match. The script had been flipped.

“The environment they were put in this week brought out some of their best golf that I’ve ever seen from [this team],” Mickelson said. “It’s truly a remarkable thing to watch, and it’s a fun thing to be a part of. And to see the level of accomplishment and performance that these guys had this week was just sensational.”

At Hazeltine, Mickelson also mended his Ryder Cup reputation on the course. Mickelson owns an, ahem, uninspired Ryder Cup record for a player of his stature. He now has a 18-20-7 mark, tied with Jim Furyk for the most losses in U.S. history. Phil’s resume can be broken into two parts. From 1995-2010, Mickelson has a 11-17-6 record. From 2012-16, his record is 7-3-1. (He’s the Americans’ leading point-earner in those three years.) The recent success coordinates with a drop in the world rankings; Mickelson has preformed better the lower he’s ranked entering the event. He was miserable in 2004 and ’06 when he was the fourth and second-ranked player in the world. He has been fantastic the last three years when his highest ranking was 11th. The uptick in personal performance hadn’t translated into a U.S. victory until this week.

In the second match on Friday, Mickelson was sent off first in foursomes alongside Rickie Fowler. On its face, that’s a dubious pairing. Mickelson is errant, to be kind, with his driver, and Fowler has not played consistently all season. But Mickelson and Fowler are buddies, and this is the slot Mickelson wanted. The duo was erratic – a double-bogey followed by three straight birdies – but won holes 15, 16 and 17 against Rory McIlroy and Andy Sullivan en route to a surprising 1-up victory.

On Saturday afternoon, Mickelson and Matt Kuchar laughed their way through a back-slapping, shimmy-shaking foursomes match against Sergio Garcia and Martin Kaymer. After the 2-and-1 win, Kuchar spoke reverently of playing with someone who he considers a big brother. “It was such a thrill,” Kuchar said. “I was so proud to be alongside him.”

On Sunday, Mickelson was matched against another wily veteran in Europe’s Sergio Garcia. (He was slotted in a critical sixth spot, no coincidence.) The Patrick Reed/McIlroy match got the highlights, but Mickelson vs. Garcia featured better quality golf. Mickelson carded 10 (10!) birdies, and Garcia had eight. The match went to the final hole with Mickelson curling in a birdie putt and literally jumping for joy. Garcia followed with a birdie too, which fittingly ended the match in a tie.

As he walked across a bridge to the locker room, Mickelson hugged friends and dished out thumbs-up left and right. Someone handed him a bottle of champagne.

Two years in the making, Mickelson had won.