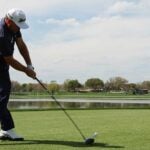 Graeme McDowell has taken himself out of the running for U.S. Ryder Cup captain.

Is it now or never?

The 42-year-old has been mentioned as a potential candidate for the position of European Ryder Cup captain in Italy in 2023. But McDowell explained on Thursday at Bay Hill that he doesn’t think he’s quite ready for that step; he wants to continue prioritizing his playing career.

Still, he’s not quite sure.

“I don’t know,” he said after his first round at the Arnold Palmer Invitational. “I’m obviously playing with Zach [Johnson] this week, walking around thinking maybe should I throw my hat in and go with him? I just don’t think I’m quite ready.”

Johnson, who is 46, was just named the U.S. Ryder Cup captain. It was an unsurprising appointment. But the European position is murkier this time around, with a range of names including Luke Donald, Henrik Stenson, Robert Karlsson and McDowell in the mix.

“Part of me would love to because part of me thinks, if I don’t take this one, I might not get it, which would be disappointing,” McDowell continued. “But I kind of have to put my own individual career first, I feel like. I desperately want to get back playing consistently well at a high level again rather than maybe taking my attention away and taking the Ryder Cup captaincy.

In other words, McDowell would rather make next year’s Ryder Cup team as a player than a captain. Gunning for the captaincy, in his mind, would mean conceding he couldn’t do that.

Qualifying hasn’t yet begun for Team Europe, which means McDowell has time to find his form. The Northern Irishman has slipped to No. 399 in the world and has posted just one top 10 on the PGA Tour — a T4 at the Corales Puntacana Resort and Club Championship — since the beginning of the 2020-21 season.

Still, he’s off to a hot start at Bay Hill, posting an opening round of four-under 68 to crack the top five.

“I’ve been struggling to put it all together lately, but there’s been a lot of good stuff happening with my game the last three or four months,” he said. “Scores maybe haven’t suggested it, but I played fantastic in Phoenix a couple weeks ago and just made nothing. Got off to a great start in Palm Springs and just didn’t continue it.

“Like I say, it’s been simmering. Some good stuff simmering. I’ve just got to keep knocking on the door and see what happens.”

Why not just wait a couple Ryder Cup cycles and slot into a later position as captain? According to McDowell, it’s not that easy. Euro legends are “stacking up” in front of him. Those include Justin Rose (World No. 43), Lee Westwood (No. 45), Sergio Garcia (No. 48) and Ian Poulter (No. 64), each Ryder Cup stalwarts who remain relevant Tour competitors. Therein lies the dilemma: McDowell’s best chance at the captainship may be right now, before the position gets clogged with a generation of stars.

One additional complicating factor in the captaincy is the potential for a Saudi-backed breakaway league pursuing European stars. McDowell said that was not a factor in his decision-making.

“It seems like the Saudi league seems to be a variable that is kind of putting things on delay at the minute. Like I say, from my point of view, certainly nothing to do with the Saudi league why I’m not going to take the captaincy. It’s really about me just trying to focus on what I’m doing out there as much as I possibly can.”

The fact that the conversation was happening at all was a good sign for McDowell. A strong start at Bay Hill refreshes the idea that he would be a contributing factor on a European team. These days, 42 years old hardly seems disqualifying. As for who the captain might be instead? McDowell will gladly give his blessing.