Ryder Cup 2016: The Case for Rickie Fowler as a U.S. Captain’s Pick 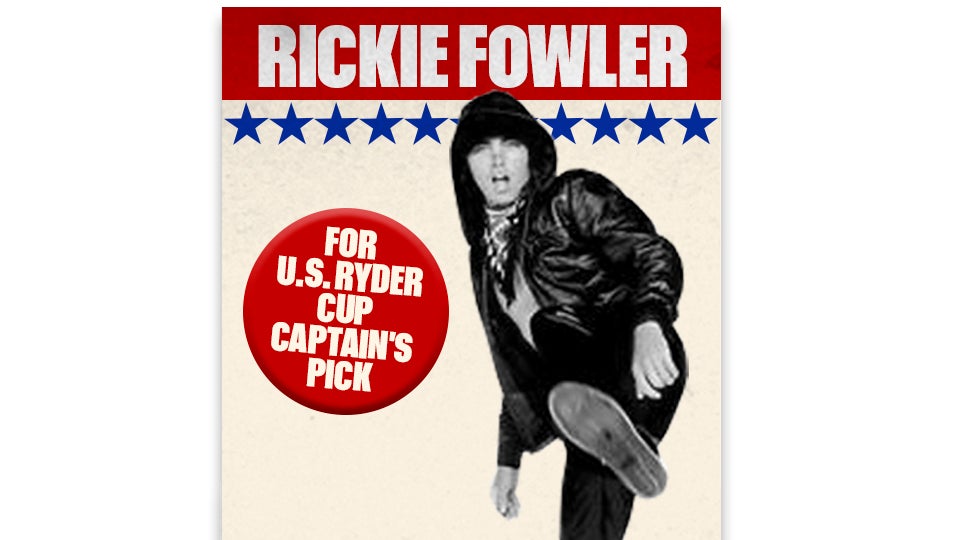 Should Rickie Fowler be a captain's pick for the Ryder Cup? He is likely at the top of Davis Love's list.
Kaitlin Santanna Graphic

U.S. Ryder Cup captain Davis Love III has a daunting job ahead of him: filling the four spots on his squad reserved for wildcard picks. Who’s on DLIII’s short list? Presumably he already has his favorites — and we have ours. Each day in the run-up to Sept. 12, when Love will announce three of his picks (he won’t name his final pick until Sept. 26, the Monday after the Tour Championship), a GOLF.com staffer will make the case for a player who deserves the nod. Up next, fan favorite Rickie Fowler. Who do you think belongs on the team? Let us know here.

Rickie Fowler will be on the U.S. Ryder Cup team. Davis Love hasn’t officially announced the pick, but it’s a certainty: Rickie is in. Of all the options Love has at his disposal, and there are many, Fowler is his easiest call. Let us count the reasons why:

In January Fowler earned exactly zero Ryder Cup points for his win at the European tour’s loaded-field Abu Dhabi HSBC Golf Championship, which paid out a tidy €409,686 for first place. If that event, in which Fowler beat Henrik Stenson, Jordan Spieth and Rory McIlroy, was weighted like a regular PGA Tour stop, Fowler would’ve earned one point for every $1,000 in prize money. Even without factoring the exchange rate, that’s 409 points, which would’ve vaulted him to 7th in the year-end R.C. standings. This week, instead of trying to impress Captain Love, Rickie would be getting fitted for star-spangled sweaters.

Everyone on the Force has a defined role on the 2016 team, except for Floyd and Fowler. (Furyk may even have his vice-captaincy upgraded to a playing role.) You think the committee will pass on Rickie and leave one of its founding fathers in the dust? To be sure, Fowler hasn’t had a banner year. In 2014 he famously finished top five in all four majors. This wasn’t that kind of season, but it’s been plenty good enough. Fowler hasn’t missed a cut since the U.S. Open at Oakmont, and Hazeltine is nothing like Oakmont. (Few courses are.) He also led the Barclays for much of last weekend at mighty Bethpage Black.

His Sunday fade, from both the lead and the top-three that would’ve secured his Ryder spot, was discouraging. But Fowler is still a lead-pipe lock for this team for one more reason that has nothing to do with his on-course talents, his Ryder Cup experience (0-3-5 lifetime record), or his reputation as a gritty match-play competitor. He will strut onto this team because he stands alone as golf’s preeminent marketing force.

Drop into a pro tournament and check out all the kids in orange shirts and flat hats. Or flip on a television, where his mug appears in seemingly every other advertisement on Golf Channel (we are Farmers!). Last month Rickie’s brand reached new heights when he competed in the Rio Olympics while other big-name players took a pass. Rory McIlroy said at the British Open that he couldn’t give one balata about growing the game. Jason Day fretted over Amazonian mosquitos. Jordan Spieth had someplace else to be. But Fowler flew to Rio, and he went all in. Did you see his pics with Michael Phelps on social media? Or in the stands at the volleyball arena? Or hanging with the diving team? Rickie didn’t stay in some palatial, suburban Rio McMansion; he bunked in the athletes’ village. No other golfer more fully embraced the Olympic experience. Millions were watching. So was DLIII.

So take it the bank: Rickie’s on this team, and I’m looking forward to it. You might have noticed that he’s grown a FedEx Cup “playoff mustache.” What do you think he’ll do in Hazeltine? Shave USA into the side of his head like he did in Gleneagles two years ago? Perhaps he’ll raise the jingoistic ante and buzz LAND OF THE FREE into his ‘stache. Anything is possible.

Maybe he’ll even win a match this time.