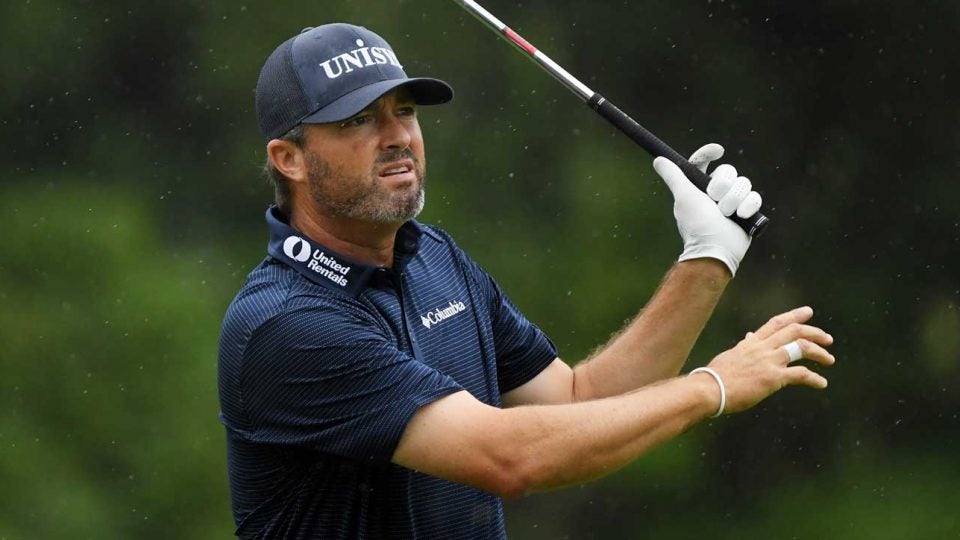 Ryan Palmer pictured during the final round of the 2020 Sony Open.
Getty Images

The finish at the 2020 Sony Open on Sunday was a complicated slog—full of bogeys, wild nervy shots and painfully long waits.

Cameron Smith came out on top in the end, collecting his second PGA Tour win in a playoff. But he was the only contender who left with a smile on his face.

Young phenom Collin Morikawa suffered an embarrassing three-putt from four feet at 17. Tour veteran Ryan Palmer hit his approach shot on 18 out of bounds. And no player was frowning more than Brendan Steele, who coughed up a two-shot lead with a bogey at 17, a disappointing par on 18, and another bogey in the playoff to lose to Smith.

But some observers didn’t blame Steele for his collapse. Instead, they laid fault at the feet of Palmer. That’s because Palmer’s aforementioned O.B. shot on 18 caused a painfully long delay in the crucial closing moments of play.

His 265-yard attempt from a fairway bunker flew into grandstands to the left of the fairway and took a wild ricochet. He opted not to take a provisional and only declared it O.B. after arriving at the area and taking three minutes to look for it. He then had to go all the way back to the bunker to re-do his shot.

As this was happening, Steele and the rest of the final group were waiting to play, first on the 18th tee, and again in the fairway once Palmer was forced to return and hit his shot again.

When the green was finally cleared, Steele hooked his approach badly from 245 yards, sending his shot into the grandstands. The wild shot resulted in a par on the closing par-5, which coupled with Smith’s birdie on 18 to erase Steele’s lead completely and force a playoff.

Brendan Steele led by 1 when he hit this approach into the 18th hole ... pic.twitter.com/MJOhHbLbME

In all, it took Steele’s group about 40 minutes to play the final hole with the delays caused by Palmer. After the tournament was complete, Palmer received a lot of criticism from fans on his Twitter account, enough to inspire a reply from the PGA Tour veteran.

“And for all those questioning the last hole,” Palmer tweeted, “I’ll do it again next week so deal with it. That’s golf.”

One Twitter user commended Palmer for attempting to reach the green from the bunker, but then told him to hit a provisional next time so as not to “screw up the players behind you.”

To that Palmer shot back, “I didn’t hit their shots!!”

I didn’t hit their shots!! https://t.co/utwpbZWZCr

Whether or not Palmer showed proper etiquette by forgoing a provisional is up for debate, but his final point is a fair one.

To attribute Steele’s collapse solely to the interminable wait on the 18th hole is unfair, and flies in the face of the facts on the ground. After all, Steele’s game was already showing cracks before the closing hole. His bogey on 17 is what gave his competitors a shot in the first place.

Had he sunk a six-footer for par at 17, he would have avoided a playoff altogether, and no one would be wasting their time scolding Palmer on Twitter.