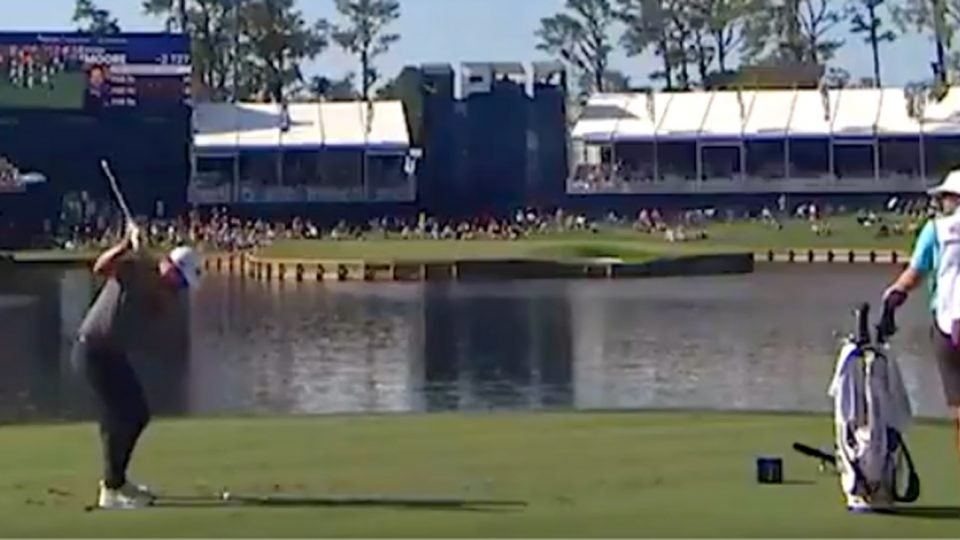 Ryan Moore hits his tee shot on the par-3 17th hole Thursday at the Players Championship.
@PGATOUR on Twitter

Every year during the Players Championship something incredible (or tragic) happens at the infamous island-green par-3 17th hole, and on Thursday Ryan Moore provided the fireworks with arguably the most incredible hole-in-one in tournament history.

There have been a lot of aces at the 17th hole over the years, so why is this one so special? It’s special because Moore’s ball flew directly into the hole without ever touching the green.

That’s right, it didn’t land on the green and roll in, nor did it one-hop into the cup. The next thing Moore’s golf ball touched after making impact with the face of his wedge was the bottom of the cup (ok, maybe the inside edge of the cup).

News
How much does it cost to play a round at TPC Sawgrass? (Hint: it ain’t cheap!)

Check out the shot below, including the deafening roar from the thousands of fans gathered around the iconic hole, and the look of disbelief on Moore’s face when he realized it went in.

The 17th was playing a short 121 yards during the first round, with the hole cut close to the front of the green.

In case anyone needs physical proof, Moore’s ball left a significant dent on the inside edge of the cup when it fell out of the sky.

Because he started his round on the 10th hole, the amazing ace moved Moore to four under through just eight holes. That left him three shots off the lead with 10 more holes to play in the opening round.

UPDATE: Ryan Moore made two more birdies and a bogey to finish the first round at with a five-under 67. Unfortunately, Moore took a step back on Day 2, going two over for a 74 on Friday. But he recovered well, shooting a 69 on Saturday and following that up with another 69 on Sunday. With those two solid rounds on the weekend, Moore reached nine under for the tournament, good enough for a T20 finish. Rory McIlroy bested Moore by seven shots to win the 2019 Players Championship.