Rory McIlroy Wrote Letter To Tiger Woods When He Was 9 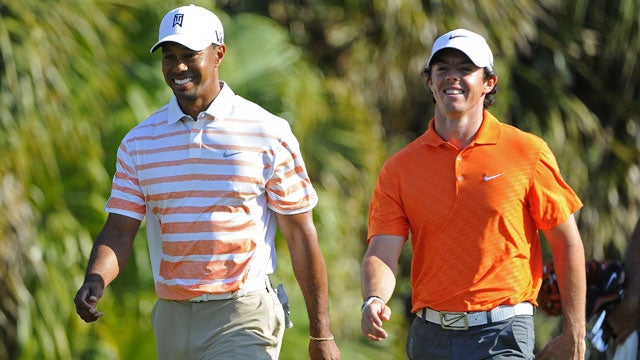 Tiger Woods and Rory McIlroy during the 2013 WGC-Cadillac.
Getty Images

Rory McIlroy predicted the future in a letter to Tiger Woods that he wrote as a 9-year-old.

In a New York Times Magazine profile, a letter McIlroy sent to Woods in 1999 was pieced together through interviews with McIlroy and close family members. The message was simple.

“I’m coming to get you. This is the beginning. Watch this space.”

In the story, McIlroy was asked what he recalled from the letter.

“A lot of those memories have kind of blurred together,” he said somewhat sheepishly. “But, yeah, it went something like that.”

Even if the letter didn’t make it to Tiger’s residence – although the image of Tiger reading this letter in 1999 and laughing it off is too good not to imagine – the thought of the toothy, cheerful McIlroy taking the time to sit down and pen a prophecy to his idol is awesome. McIlroy had just won the 1998 Doral-Publix Junior Golf Classic in Florida for the 10-11 age group. Woods was the No. 1 ranked player in the world.

Fast forward to 2015. McIlroy has taken that No. 1 ranking. He’s the favorite to win any tournament he tees it up in, an honor Woods held for more than a decade. He might be more marketable for Nike than Woods, who single-handedly built the Nike Golf empire. He even took Woods’ video game!