What fans don’t fully appreciate about PGA Tour fields, according to Rory McIlroy 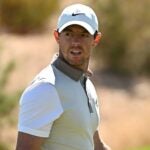 Rory McIlroy at the CJ Cup, in Las Vegas, this week.

“I think a really good season nowadays is — three wins is exceptional, two wins is very good, and then anything, like, above three, you’re the best player in the world at that point,” McIlroy said earlier this week from the CJ Cup, in Las Vegas.

McIlroy’s winningest season came in 2012 when he won four times. (He also won four times in 2019, but the last of those victories came at the WGC-HSBC Champions, in November, when the 2019-20 season was already underway.) “I think nowadays that’s an achievement,” McIlroy said of his 2012 win total. Then he referenced Woods and Singh’s monster years. “Maybe I’ll be wrong, but I don’t know if we’re going to see them again.”

The competition, McIlroy said, is simply too good.

“People don’t realize that,” he said. “You turn up to a PGA Tour event, like a typical event where there’s 144, 156 players and you feel like three-quarters of the field have a chance to win. I think that just sort of illustrates how deep the fields are. And it’s tough to win, right?”

McIlroy said that point hit home for him in the fourth round of the Wells Fargo, at Quail Hollow, earlier this year, when he was paired with Keith Mitchell, a one-time Tour winner who largely flies under the radar. Mitchell was unable to capitalize on his two-stroke 54-hole lead that Sunday — McIlroy ultimately won by a shot over Abraham Ancer — but that didn’t diminish McIlroy’s admiration for Mitchell’s game.

“He came out and he hits it in the left bunker on 1, hits an unbelievable 7-iron to, like, 10 feet and holes the putt,” McIlroy recalled of his partner. “People wouldn’t maybe pick a Keith Mitchell to win a tournament at the start of a week, but you play with him in a final round on a Sunday, he stopped me in my tracks. I was like, he is a hell of a player.”

On a Tour full of them.

McIlroy has work to do if he’s going to start off the new season with what would be his 20th PGA Tour win. After a first-round 68 in Vegas, he is seven back of leader Robert Streb.

Lee Elder, the first Black golfer to compete in the Masters, dies at age 87