Rory McIlroy already has the PGA Tour’s 2019 Tour Championship trophy on display in his home, but he could another piece of Tour Championship hardware to his trophy case on Sunday, this one from the European Tour.

McIlroy is in Dubai this week playing in the DP World Tour Championship, the final event of the season on the European Tour. But McIlroy isn’t just playing, he’s contending, too. Rory fired a seven-under 65 in the third round at Jumeirah Golf Estates, rocketing him up to 13 under overall, just two shots off the lead.

Rory still trails Frenchman Mike Lorenzo-Versa and World No. 5 Jon Rahm, who are the co-leaders at 15 under through 54 holes. His position would be even better if not for his unfortunate second round.

After opening with a sterling 64 on Thursday, McIlroy slipped off the pace with a disappointing two-over 74 on Friday, a round that featured a double bogey on the par-3 6th hole and only two birdies. But he stormed back in the third round with five birdies, an eagle, and zero bogeys to put himself back in contention. 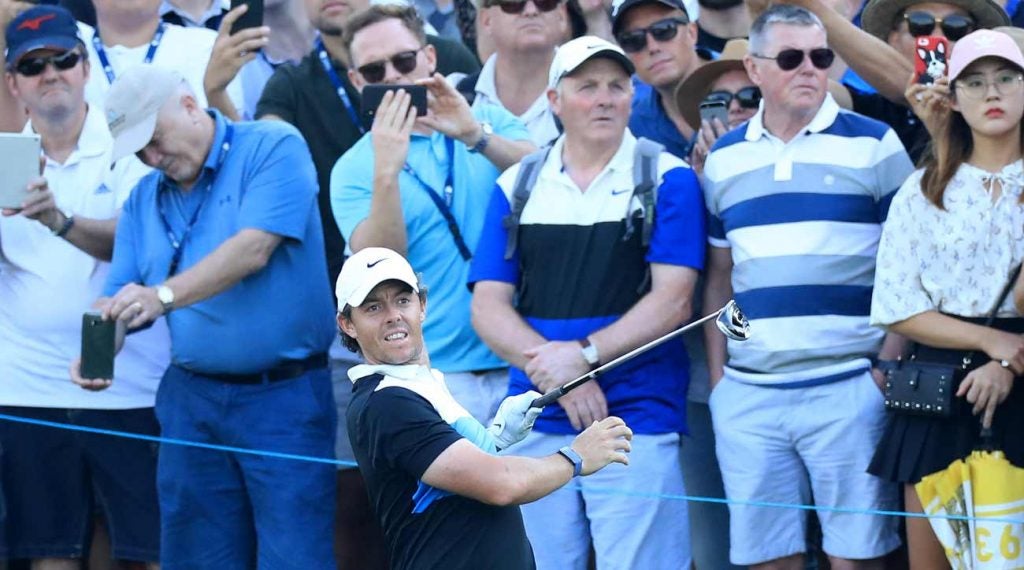 Rory McIlroy pictured during the third round of the 2019 DP World Tour Championship.
Getty Images

Back in August, McIlroy stunned the golf world by winning the first stateside Tour Championship under its new format. McIlroy began the tournament five shots back, but by Sunday night had put himself four shots clear of the field. Thanks to the new format, the win at East Lake also earned McIlroy the FedEx Cup title and its $15 million grand prize. It was his second time winning the Cup after previously capturing the title in 2016.

Though he has a great shot to capture the DP World Tour Championship title on Sunday, which would be the third of his career, McIlroy won’t be taking home the season-long Race to Dubai title as well. Given his starting position in the rankings (6th), not even a win in Duabi will earn him those honors (though he already has three Race to Dubai titles to his name).

Rahm, on the other hand, is in great position to win the season-long title. He started the tournament 3rd in the rankings, and a win will assure him the title.

If you’re in the United States, you can watch all the final round action live on Golf Channel, but you’ll have to wake up early. The final round broadcast runs from 1:30-7:30 a.m. on Sunday.