Rory McIlroy, errant as ever, fails to kickstart his U.S. Open Thursday

ERIN, Wis. — You had to believe Rory McIlroy would brandish the driver—his most lethal weapon—all day Thursday.

Remember, this is the guy who at his press conference earlier this week said, “We have 60 yards from left line to right line. You’ve got 156 of the best players in the world here, if we can’t hit it within that avenue, you might as well pack your bags and go home.” If anyone was ready to smash the d-stick, it was Rory, who was seven shots back when he teed off at 2:09 local time here in sweaty, rural Wisconsin.

And smash he did, booming driver on the 1st hole, albeit into the rough, followed by a two-putt par. Then he smashed driver on the 2nd hole, 320 yards over the gigantic fairway mound, all the way onto the green. He’d make the eagle putt. Two under. Rory smashed driver again on the 3rd hole, and on the 4th hole and again on the 5th. On the 7th, smash! This one was a low-liner that skirted into the fairway 20 yards beyond Justin Rose and Jason Day. When his three-wood flared right and his pitch raced by the hole, McIlroy made a disappointing par and sat at one under, playing as aggressively as he probably could, like a Jaguar stuck in neutral. “I watched some of the coverage earlier on,” McIlroy said following the round. “Seeing what Rickie did, and Brooks Koepka, some of those guys. I was trying to do that. I thought I was going to do that, two under through two.” 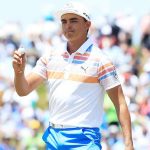 You may also like Rickie Fowler, low scores reign on controversy-free first day of U.S. Open

From the 8th tee onward, he shifted into reverse.

Rory’s towering tee shot on the 490-yard 8th hooked left into knee-high fescue. He punched out—best that he could do, really—but failed to get up and down from 47 yards. That dropped him to even par.

For a guy who finished the first round ranked 7th in driving distance at 326 yards, it played out as an ironic tale given his statements earlier this week. He hit five of 14 fairways, which ranked dead last in the field. McIlroy is a momentum player, and Thursday he found none of it.

In each of his four major victories, Rory has either led or trailed by one stroke after the first round. Even when he’s started slowly, McIlroy has often found a way to backdoor a top 10. Think of his four straight top 10s at Augusta National without contending to win. Or his 67 last July at Troon’s Open Championship for a T5. Or his six birdies in 13 holes Sunday at Chambers Bay to flirt with the trophy before tying for ninth. Eventually, McIlroy reminds everyone just how elite of a player he is. Maybe that begins Friday, but maybe it’s not enough. When he tees off at 8:24 a.m., he’ll be trailing Fowler by 13 strokes and fighting to make the cut. 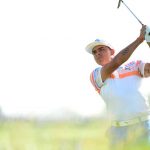 You may also like Rickie Fowler is golf’s major star; now he just needs some major hardware

Moments after signing his card Thursday night, he was asked for an assessment of all the variables: his score, his deficit and his round spent in the weeds. Rory said what everyone was thinking.

“It all started so well.”