When Rory McIlroy stepped up to the 1st tee at The Open Championship Thursday, he undoubtedly felt pressure. This tournament — played at Royal Portrush in McIlroy’s home country of Northern Ireland — is among the most important moments, if not the most important moment, of his career. Portrush is where 16-year-old Rory shattered the course record with a 61. Our Luke Kerr-Dineen posited whether this might be the most pressure any golfer has ever been under heading into a tournament.

That stress reared its head early when McIlroy’s first tee shot sailed left into the out of bounds area. That led to a nightmarish 8 on the 1st, a quadruple bogey.

News
The Open 2019: Is the opening-hole O.B. that wrecked Rory’s round unfair?

McIlroy sat down with NIKE’s “Trained” podcast recently to discuss, coincidentally, pressure and the mental side of golf. His answers help illuminate the way he might have felt after carding that quad, and how he’s likely to approach a week now spent scrambling to recover.

“Resilience, that’s a big word for me, whether that be with your body, with you mind, with everything,” he said. “I think the more resilient you can be, the better performance that you’re going to have.”

The interview took place shortly after the PGA Championship, in which his second-round struggles put him in peril of missing the cut.

“It’s a comfort thing knowing there’s a lot of golf left. You try to set these little mini-goals throughout the round. When I had that bad start, let’s make two birdies in the next seven holes — or whatever it is.”

At the PGA Championship, McIlroy said that goal was to shoot better than he had the day before (when he shot two over par). That ultimately came to fruition, when a strong back nine brought him to one over. It’s unclear what that goal might have been Thursday.

McIlroy said he utilizes internal dialogue throughout the round, trying to verbalize goals and positive reinforcement.

“I think everyone needs a mantra, whether that’s ‘let’s get one first down, and just keep going on that,’” he said. “… Arthur Ashe had a mantra when he went out on the court, was to be physically loose and mentally tight. Four words, that was it. If you keep saying that to yourself over and over, that becomes what you’re trying to do. If you do that more and more, then the result becomes almost a byproduct.

“Any time I feel a little bit nervous on the golf course, I think, ‘OK, you’re going to be mentally tight and you’re gonna physically loose. The last thing I want to be is the other way around — if I’m physically tight when I’m trying to hit a shot, I’m guiding it and that’s never gonna work. The more I can just let my best swing come through, and just let that happen, that’s when I’m gonna have success.” 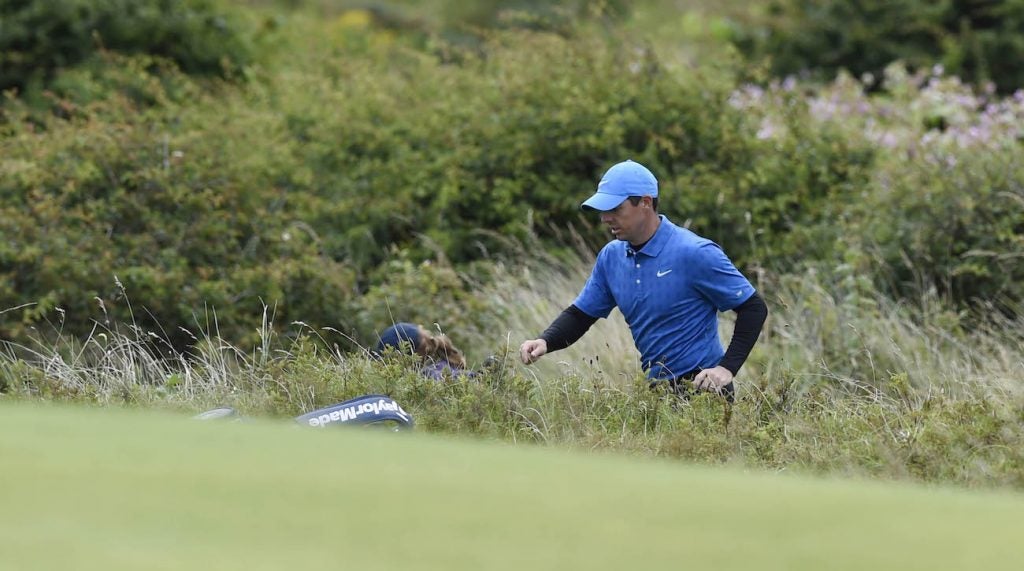 Rory McIlroy climbs out of the rough on the 5th hole during the first round of The Open Championship.
Ian Rutherford-USA TODAY Sports

It’s not hard to imagine that verbiage running through his head before, during and after his woeful start Thursday. Though he bogeyed the third hole, McIlroy made two birdies on the front nine to steady course. He struggled again, though, on the closing holes, finishing double-par-triple for a 79.

It will take a mighty effort from McIlroy to claw his way back into contention. But it still will be interesting to hear what was going through his head when he saw that tee shot sail left on No. 1.