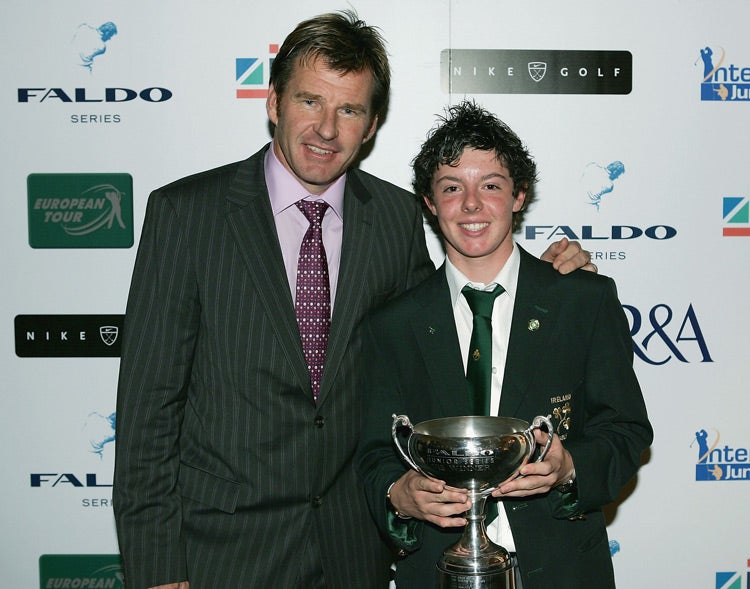 Richard Heathcote/Getty Images
1 of 33
Like Tiger Woods, Rory McIlroy was making headlines before he became a pro. In 2004, McIlroy, 15, won the Faldo Series Final in England and met one of his idols, Nick Faldo.
Ross Kinnaird/Getty Images
2 of 33
McIlroy won numerous amateur events before turning pro in September 2007.
David Cannon/Getty Images
3 of 33
Michael Bannon has been McIlroy's coach since his junior days in Northern Ireland.
Fred Vuich/SI
4 of 33
McIlroy made his first start in a major at the 2007 British Open at Carnoustie. He opened with a 68 and finished as the low amateur.
David Cannon/Getty Images
5 of 33
McIlroy turned pro in September 2007, and he quickly earned his European Tour card. In February 2009, he won his first professional title at the Dubai Desert Classic.
Robert Beck/SI
6 of 33
Before his debut at the 2009 Masters, McIlroy posed for the cover of SI Golf+.
John Biever/SI
7 of 33
McIlroy tied for 20th at the 2009 Masters, his first major as a pro.
Richard Heathcote/Getty Images
8 of 33
Thanks to a final-round 62, McIlroy won his first PGA Tour event at the 2010 Quail Hollow Championship.
Fred Vuich/SI
9 of 33
At the 2010 British Open at St. Andrews, McIlroy was in contention in a major for the first time. He opened with a nine-under 63, tying the course record, and wound up finishing tied for third.
John Biever/SI
10 of 33
At the next major, the 2010 PGA, McIlroy was in contention again, but he finished a shot out of the playoff between Martin Kaymer and Bubba Watson.
Robert Beck/SI
11 of 33
McIlroy made his Ryder Cup debut in 2010 at Celtic Manor and helped Europe defeat the U.S.
David Cannon/Getty Images
12 of 33
McIlroy teamed up with countryman Graeme McDowell to win 1 1/2 points for Europe.
Robert Beck/SI
13 of 33
McIlroy took a four-shot lead into the final round of the 2011 Masters, but he was unable to win his first major. He shot 80 on Sunday and tied for 15th.
Carlos M. Saavedra/SI
14 of 33
It didn't take long for McIlroy to recover. Two months later, he dominated at the U.S. Open, shooting rounds of 65-66-68-69 to win his first major by eight shots.
Fred Vuich/SI
15 of 33
McIlroy finished at 16 under, shattering the record for lowest score ever in a U.S. Open.
David Walberg/SI
16 of 33
McIlroy became the No. 1 player in the world when he won the 2012 Honda Classic.
Fred Vuich/SI
17 of 33
At the 2012 Masters, McIlroy started the third round one shot off the lead, but he faded on the weekend and tied for 40th. Much of the rest of the season was tough as well. He missed cuts at the Players Championship, the Memorial and the U.S. Open, and tied for 60th at the British Open.
Fred Vuich/SI
18 of 33
McIlroy won his second major at the 2012 PGA at Kiawah Island.
Brendan Kemp/Getty Images
19 of 33
Before McIlroy's 2013 season debut in Abu Dhabi, Nike introduced him as the company's newest staff member with much fanfare, reportedly giving Rory one of the most lucrative endorsement deals in golf history.
Simon Bruty/Sports Illustrated
20 of 33
Fresh off his endorsement deal with Nike, McIlroy had, by his own high standards, an off-year in 2013. His was 25th in the Masters at Augusta National (left), 41st in the U.S. Open, missed the cut in the British, and finished eighth in the PGA Championship. He still had five top-10 finishes and won $1,802,443 to set the stage for a massive 2014.
Matthew Lewis/Getty Images
21 of 33
Rory McIlroy began 2014 by announcing his engagement to tennis star Caroline Wozniacki, who joined him after his second-place finish at the Abu Dhabi HSBC Golf Championship in January (left). The two broke off their engagement later that year.
David Walberg/SI
22 of 33
McIlroy hinted his game was returning to form after a second-place finish at the Honda Classic in March. He led through three rounds before faltering with a 74 on Sunday and eventually losing in a three-way playoff. He did manage tohit one of the all-time best approaches into the 18th hole and nearly stole the victory.
Simon Bruty/SI
23 of 33
Rory recovered from these flowers on the way to his eighth-place finish at the Masters in April. It was his second consecutive top 10 after a T7 the week before in the Shell Houston Open. He followed up the Masters finish with a T8 in the Wells Fargo Championship and a T6 at the Players Championship.
Darren Carroll/SI
24 of 33
That top-10 finish in the Players Championship featured a final-round 66, including a birdie at 17. "I've been saying the last few weeks, I'm seeing enough really good golf in there to be really positive going into the sort of main stretch of the season," he said after the round. He was right.
Thomas Lovelock/SI
25 of 33
After a tie for 23rd at the U.S. Open, Rory shot back-to-back 66s in the first two rounds of the British Open at Royal Liverpool. He held off Sergio Garcia and Rickie Fowler on Sunday by two shots to win his third career major.
Fred Vuich/SI
26 of 33
McIlroy followed up his British Open triumph by winning the Bridgestone Invitational and then made it three in a row with his win in the gloaming at the PGA Championship. McIlroy edged Phil Mickelson by a shot at Valhalla, the fourth major title for the 25-year-old.
EPA/ERIK S. LESSER /LANDOV
27 of 33
McIlroy nearly won the season-ending Tour Championship, too. He was second, three shots behind Billy Horschel, who pocketed the $10 million bonus for winning the Fed Ex Cup. "He was clutch when he needed to be," McIlroy said. "He played the best golf this week and I'm happy for him."
Robert Beck/SI
28 of 33
Rory capped his season by helping Team Europe retain the Ryder Cup in a 16.5-11.5 victory over the Americans at Gleneagles. The final tally from his magical 2014 season included $8,280,096 in official PGA Tour prize money, two major championships and 12 top-10 finishes in 17 events.
@rorymcilroy Instagram
29 of 33
Getty Images
30 of 33
Getty Images
31 of 33
Getty Images
32 of 33
Andrew Redington
33 of 33
Dreams do come true. Tournament host Rory McIlroy wins his national open in stunning fashion.
2016 Getty Images