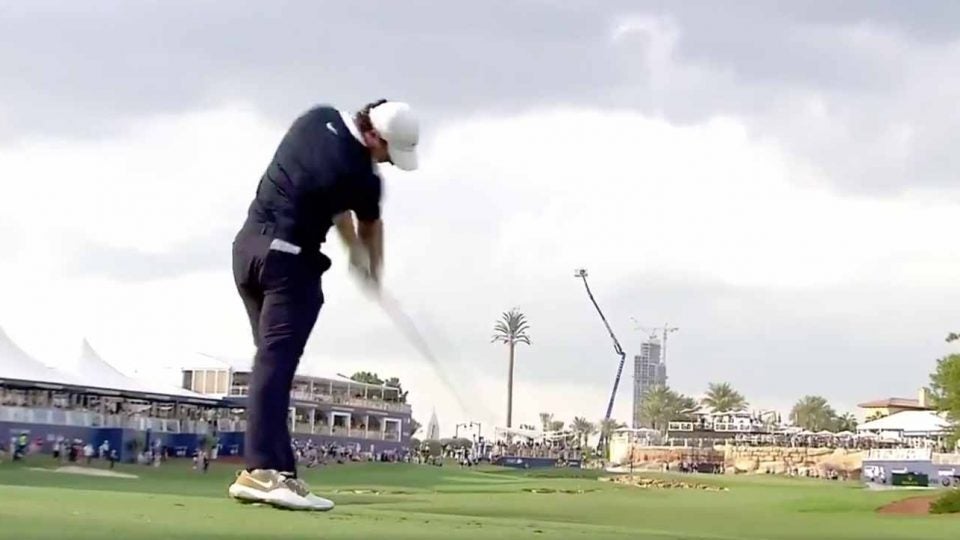 Rory McIlroy hit what he called his shot of the year on Thursday in Dubai.
European Tour

These days, little things are changing in Rory McIlroy’s world. He’s shopping for homes in London, searching for an international base for an international superstar. He’s growing his hair out for the first time in years, calling visions of Young Rory to mind. His wife Erica just surprised him with a brand-new trophy case in the game room of their new Florida home, marking the first time he’s seen his collection of earned wares since putting them in storage more than a year ago. It was a reminder, he said, that “I’m still pretty early in my career and I’ve done quite a lot, but I still want to do so much more.”

That leads us to the golf, where McIlroy has recently been playing like a very good version of himself — and he knows it. On Wednesday in Dubai, he was asked whether he thought he’d been deserving of his PGA Tour Player of the Year honors over Brooks Koepka. After some hemming and hawing, he settled on something definitive. “I’ve accumulated 100 more World Ranking points than anyone else this year,” he said. “If you look purely by the numbers, I feel like I was deserving.”

McIlroy looks at the numbers quite a bit. He revealed some very number-oriented goals he’d had for 2019: He wanted to gain .25 strokes putting, he said, and he nearly doubled that. He wanted to gain .2 strokes around the green, and he gained .3. He gained 2.55 strokes on the field overall on the PGA Tour, the best season on record of anyone not named Tiger Woods (“the Holy Grail is 3.0,” McIlroy said) and was keenly aware that he needed to beat Patrick Cantlay at the Tour Championship to win the season-long scoring average title. When you add up all those numbers and mix in Brooks Koepka’s current status (rehabbing in Jupiter), McIlroy is again the Best Player in the World, at least in the interim.

Thursday, McIlroy continued his 2019 blitz, opening the DP World Tour Championship with an electric 64. It wasn’t the number itself that stood out — Mike Lorenzo-Vera shot 63 — but the exclamation point with which he finished it off. Standing on the fairway at No. 18, a beefy 600+ yard par 5, he faced a 291-yard second shot. Two hundred ninety-one yards! That’s two full shots for your average golfer, but McIlroy is not like the rest of us. Settle in and read his explanation of the shot, and transport yourself to a world in which something like what he describes would be possible to achieve.

“I had 270 — equivalent 272 — to the front, 291 to the pin, sort of back in off the left. Wind was off the left, so it was a nice one for me to just aim straight at the pin and know if I hit my little draw it should hold but if it gets going on the wind, obviously the bunker on the right is better than the water on the left. I just flushed it.

News
Why Rory McIlroy reminded us after his win that unlike Brooks Koepka, he’s a big-time golf nerd

“When I was over it, it was sort of enough left, and I sort of carry my 3-wood off the deck about 280, so it was right on the limit but as soon as I hit it, I knew it was perfect. It was right out of the middle.

“I’m looking forward to seeing it on TV later, to be fair. It was one of those where if you get it right and you button it, it’s going to be perfect. But it was more, I think if the wind had been off the right instead of off the left, I don’t know if I had of went for it because I hit a little draw, and the wind is going to hold that up. It was a left-to-right wind.

“So I knew the water wasn’t really in play. Worst-case scenario it might go in the bunker on the right and that’s not a bad leave. There’s so much more that goes into these shots than just stepping up and hitting it. If that wind had been a different direction, I might have laid up and just tried to make a birdie with a wedge. It was a perfect — it was a good number. It was perfect conditions to step up and hit a good 3-wood.”

Okay, now that you’ve read that, take a good look at the shot itself. Listen to it, too. And note the way it drops ever so softly on the green, spinning gently to a stop near the hole, the way you or I might aspire to hit a pitching wedge.

Pretty pleased with the way I finished the round today😉 #dptwc pic.twitter.com/cU1kYZtJHt

It’s worth noting, finally, that while the ball was in the air, McIlroy yelled for it to “sit,” which is typically not something one would do when hitting a 3-wood from 291 yards. “As soon as I hit it, I was afraid it might have went a bit long,” he added. That’s Rory McIlroy. He’s different.

McIlroy shot 74 on Friday after his 64 on Thursday, dropping him to the edge of the top five. There’s plenty of reason to expect he’ll contend over the weekend, and McIlroy fans should savor the chance: he’ll take a couple months off after this, likely returning for the Farmers Insurance Open. We’ll be excited for his return.

So I decided to try the Rory McIlroy Domino’s pizza

So I decided to try the Rory McIlroy Domino’s pizza