Why Rory McIlroy reminded us after his win that unlike Brooks Koepka, he’s a big-time golf nerd

Over the weekend, a video of Brooks Koepka‘s press conference went viral. When the world No. 1 was asked about his shoes — a pair of Nike Off-White Air Max 90s  — Koepka had a strong reaction. “It’s fashion, bro,” he said. “This is such a typical golf nerd, like, 40-year-old white man, like…I don’t know how to explain that.”

The implication was clear, as it has been for years: Brooks Koepka is no golf nerd, thank you very much. It was another clear demarcation in the split between Koepka and Rory McIlroy, a burgeoning rivalry that the entire golf world should be rooting for.

the video of @BKoepka explaining his off white kicks to someone he calls a “40 year old golf nerd” is absolutely *chefs kiss* @virgilabloh pic.twitter.com/2yAgsMc83G

McIlroy stared down Koepka in the final group on Sunday, posting 66 to his playing partner’s 72 and running away with the FedEx Cup in the process. But rather than the $15 million in prize earnings, McIlroy spoke afterwards about a bunch of other numbers — numbers that reminded us just how much of a golf nerd he really is.

For starters, McIlroy had his eye on a secret leaderboard at the Tour Championship. Most golfers would arrive at the 18th hole at the end of the FedEx Cup finale thinking only about claiming the biggest single prize in golf history. McIlroy was intent on shooting the lowest 72-hole score, staggered start be damned.

“I was playing a little tournament inside my head. I wasn’t necessarily looking at the leaderboard the way it was. I was just trying to look at it from, okay, well, Xander is 9-under for the week and I’m 9-under, 8-under.”

McIlroy ended up with a three-stroke triumph over Schauffele in the “lowest 72-hole score” category — and a four-shot win overall. But his final-round 66 had more significance still. The Vardon trophy goes to the player with the lowest season-long scoring average, and McIlroy was well aware of where he stood entering the week.

“Patrick Cantlay, he went to No. 1 in the stroke average last week because of Medinah, and I a hundred percent knew that coming in this week, and I wanted to end the season with No. 1 stroke average. There’s just little motivating factors that don’t have to be about the tournament, but keep you where you need to be.”

Sure enough, McIlroy flipped positions with Cantlay after beating him by 22 shots over the four days to finish with a season-long stroke average of 69.057. McIlroy was happy with eclipsing Cantlay — but still not fully satisfied with his season-ending stats. He’s a big proponent of strokes gained statistics, and McIlroy threw down one of the all-time best strokes gained seasons, picking up 2.55 shots on the field every time out. But he could only sigh when he heard that final tally.

“Yeah, the Holy Grail is three. I’m not going to stop until I get to three because Tiger has done that multiple seasons, and when you get to three strokes gained, you’re just in another league. I mean, that’s what I strive towards.” 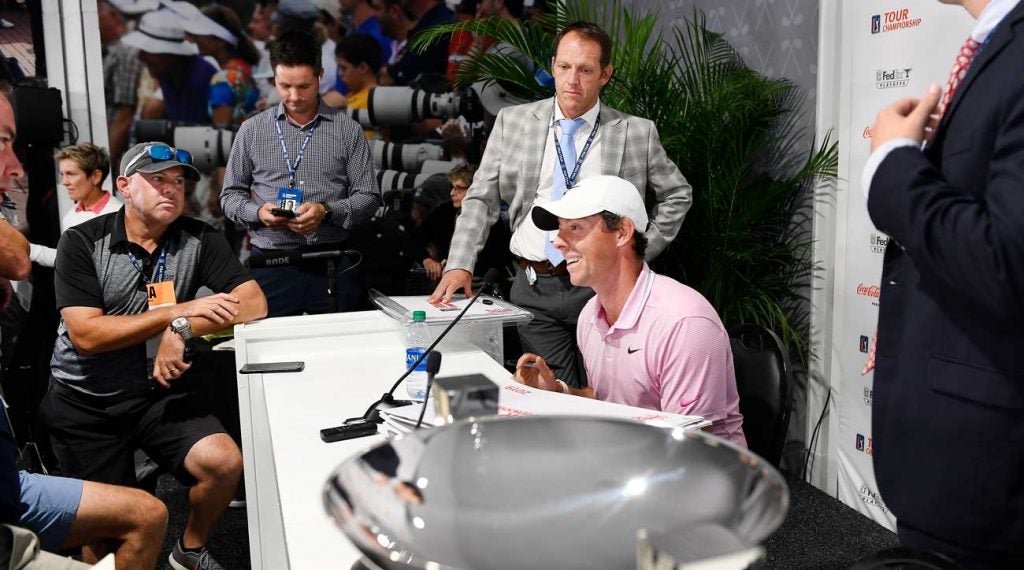 It’s important to remember that as far as golfers go, Rory McIlroy is decidedly cool. He hits driver as far as anybody, walks with an unmatched swagger, and he’s nearly untouchable when all facets of his game are working together. But it’s a different type of cool, one that’s more relatable to fellow golf obsessors. It’s likely why McIlroy has had an easier time resonating with big fans than Koepka, who wouldn’t be caught dead speaking wistfully about strokes gained goals gone awry. But when McIlroy sits down at the mic, it’s a clear reminder that this is an intelligent guy who has focused his brainpower towards golf, and he’s happy to admit it.

“One of my goals every year, plus three,” he said. “I’m getting closer.”