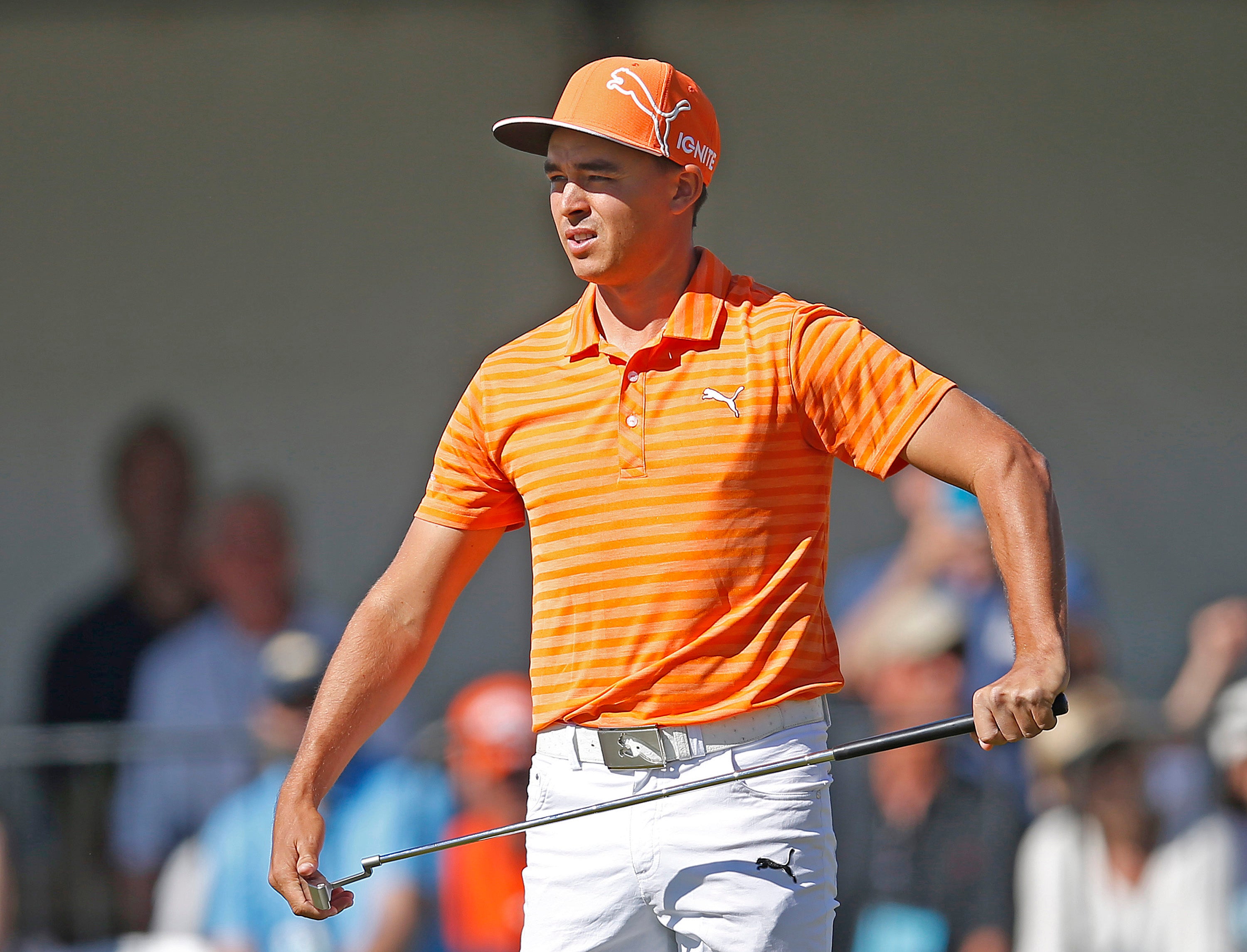 Rickie Fowler reacts after missing a birdie putt on the fourth hole during the final round of the Phoenix Open golf tournament, Sunday, Feb. 7, 2016, in Scottsdale, Ariz.
AP Photo/Rick Scuteri

A few noteworthy and unusual stats for your perusal:

Before Spieth, Mickelson was considered one of the best 15-to-25-foot putters in the game. His recent resurgence coincides with a run of good putting. Phil ranks third in putting from 15 to 25 feet (he’s made 6 of 19 attempts). Steve Stricker leads the category, having made 9 of 23. Inside ten feet, Phil ranks sixth, having holed 114 of 124 putts. Paul Casey is first in that category, at 17 for 17. Damn…

If you need to hit a fairway, go to the LPGA. Yueer Cindy Feng leads in driving accuracy with a stunning .929 average. Although it’s still early in the LPGA season, while the PGA Tour is approaching the one-quarter mark, Feng is still miles ahead of PGA Tour driving leader Thomas Aiken at .774…

Through the Waste Management Phoenix Open, there have been 1,000 drives of 335 yards or more so far this season on the PGA Tour; 300 drives of at least 350 yards; 143 drives of 360 or more; 41 tee shots of 380; and three in excess of 400 yards (all three at the Hyundai Tournament of Champions, where the course plays up and down a mountain in Kapalua, skewing the distance stats). Fourteen of the 15 longest drives were hit at Kapalua but nah, the USGA is clearly right, the ball doesn’t go too far…

If you average 300 yards per drive on the PGA Tour, by the way, you would currently rank 46th in driving distance. Last place in distance is held down by Fred Funk, a Champions Tour regular, who is 209th with an average of 261.7. I’d take that and run…

VanShankster, Did Rickie Fowler’s leggings get tight around the ankles and cut off circulation to the brain hitting driver on 17 in the Phoenix Open?—Kevin Montminy via Twitter

I don’t think it was a bad play, Monty. Fowler had been driving it on a string, more or less, all week and the area short of the 17th green was soft each day—you didn’t see many shots bounce much or roll out that landed near the green, at least not until later Sunday. The NBC crew failed to point out where Fowler’s drive landed—on the downslope of the mound behind the bunker, which was firmer due to being elevated and effectively acted as a catapult. If Fowler’s drive lands two feet farther or two feet shorter, it doesn’t careen like that and the water doesn’t come into play. It was a fluke bounce. I don’t think it was bad strategy but it was a strategy that ultimately failed. Hitting 3-wood put that bunker in play and it’s a club that is more likely to draw (unlike Rickie’s driver), as you saw in the playoff when he hooked it into the water. That mistake was bad execution. The first one was bad luck, not bad strategy. Hey Van TearyEyes, There’s no crying in golf, Rickie played aggressive, got a bad break and got beat. No shame on him. Agree?—Klaugh56 via Twitter

I thought I was a cult of one standing in defense of Rickie, Laugh-In, but apparently we think alike. This is not good news for you. Perhaps you should get checked.

Hey Van Cynical, After hitting in the water twice to lose the tournament, is Rickie Fowler’s next sponsor Speedo?—Mr. Fairway via Twitter

Not bad, Grassmaster. He might combine that with an endorsement from Dasani. I guess we can assume, too, that he’s an Aquaman fan, his favorite movies are “Splash,” Kevin Costner’s “Waterworld” and Adam Sandler’s “Waterboy,” his favorite album is Jethro Tull’s Aqualung, and his favorite recording artist is Vince Gill.

Hey Van Cyclamate, Since you are a fan of robot golf, did you like the robot’s hole-in-one at TPC Scottsdale’s 16th hole?—Chuck Garbedian via Twitter

It was a lot like playing golf with you, ChuGarb. The robot holed out on the fifth ball he hit from the tee. I’m glad the fifth one went in, otherwise ELDRIC (the robot’s acronym) might have hit a small bucket like you like to do. Overall, though, it was a sobering moment. The Rise of the Machines has begun. Somebody alert John Connor.

Hey Van Cynical, How do we make golf announcers understand that 60 degree-weather is not “cold” and players are tougher than advertised?—Brian Bailey via Twitter

On the list of things I’d like to make golf announcers understand, Barry Bailbonds, that one doesn’t rank among the top 50. Among others that do: a two-shot lead is nothing (calling Joe Buck!); it’s farther, not further; a ball does not “chase” onto a green; missed putts are seldom “unlucky”—they go where the player hit them; and whatever the golf course, it’s not in the best condition it’s ever been during tournament week for the fifth straight year. Those are for starters. Feel free to add to my list of pet peeves.

Hey Custom Vans, How many TPC courses are there nationwide? Are they built to some PGA specs? Because they have the same feel?—David Troyan

There are 35 TPC venues, Troy Soldier, 17 of them open for public play, 18 private. The Tour sold a handful of them but the courses retained the TPC named through licensing deals. If the ones you played feel the same, it may be because most of them were built within a 20-year window and influenced by Pete Dye, who did several high-profile TPCs, including Sawgrass and PGA West. Play a few more and I think you’ll see more variety. Harding Park, a classic old public track in San Francisco, now carries a TPC designation and is nothing like the modern TPCs.

Hey Vans, What is golfer Mike Van Sickle up to? Canadian Tour again this summer? Seems like not enough opportunities.—Michael O’Connor

Something changed in the Web.com qualifying system, Mannix. MVS finished about 94th in the final stage in 2014 but his Web.com ranking was in the 160s. In December, he finished 74th and his Web.com ranking is in the 190s. Thirty more guys from somewhere squeezed in ahead of him. The top 45 finishers at Q-school got exempt for the first eight events, I believe, and most of the players who missed by one shot aren’t getting in any of the early Web.com events out in South America and Mexico. There are too many players for not enough spots, as you noted, but it’s always solved by playing better. He will be appearing soon in Monday qualifying for Web.com and PGA Tour events, then maybe Canada, but he’s been home in Pittsburgh after the recent magnificent birth of Harvey Van Sickle.