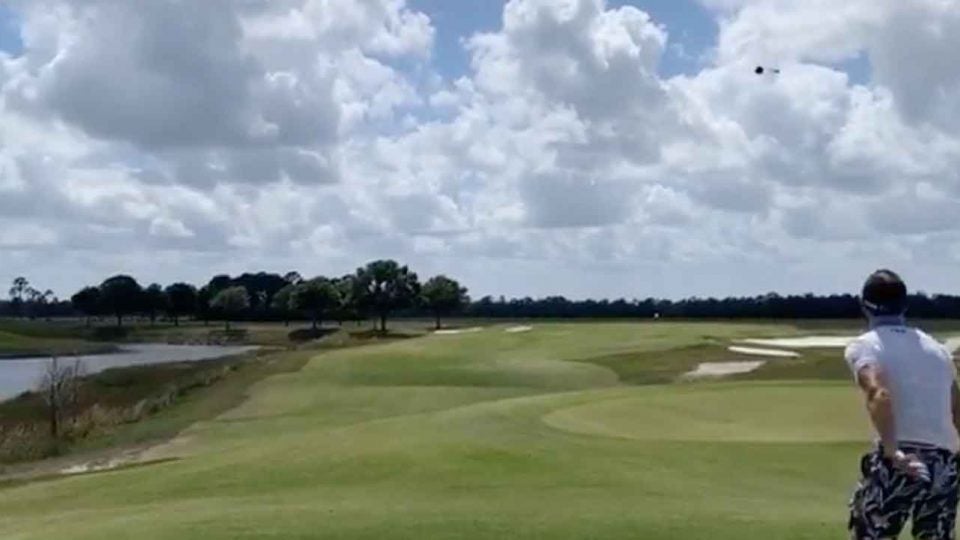 Justin Thomas launches his club in frustration during a friendly left-handed round with Rickie Fowler.
instagram.com/rickiefowler

The golf glove appeared at the bottom of the phone video to indicate where Rickie Fowler’s tee shot was heading. Justin Thomas’ thumb pointed right.

A few seconds later, a caption appeared at the bottom of the phone video to indicate what was about to happen to Thomas’ tee shot. “Big fine coming for the club throw,” Rickie Fowler wrote, as Thomas then, yes, launched his club into the air after his effort.

Two of the world’s best golfers clearly both struggled mightily and enjoyed their mighty struggles on Thursday during their “Lefty Championship,” shared through both players’ Instagram accounts.

With the PGA Tour on break until at least the middle of May due to the outbreak of the coronavirus, Thomas and Fowler haven’t broken from playing. Sunday, Fowler fired a 60 and Thomas a 65 while playing together. Wednesday, Thomas displayed a no-shirt-no-shoes-full-service shot from the mud. And on Thursday, the right-handed swingers went left, with Fowler firing a 94 and Thomas a 101.

News
WATCH: Justin Thomas gets half-naked for a recovery shot in Florida

How they got there was maybe the best part. Joined by Thomas’ dad, Mike, and Fowler’s wife, Allison Stokke Fowler, Thomas shot a front-nine 44 and Fowler a 49, then Fowler’s Instagram story provided almost a stroke-by-stroke account.

“Have you ever seen anyone more scared to hit it 4 feet past the hole?” questioned Thomas after a missed putt on 11.

Later on the 14th, Fowler hit the green on his 160-yard approach from the sand. “That’s just not at all what I needed,” Thomas said. “Probably the best shot of your life. That is dumb.”

Big struggles on the 17th. “JT’s over there getting the scuba gear out,” Fowler said of one of Thomas’ shots. Near the green, Fowler’s shot “almost hit JT’s dad on the fly. … 15 feet for bogey,” a caption read.

At the end, Fowler posted a picture of the two with the scores, while Thomas assessed the damage.