It’s been a trying couple years for Madeleine Sheils at the LPGA tour’s qualifying school.

After five rounds of grueling golf at LPGA International in Daytona Beach, Fla., the University of Nebraska graduate posted a score of 1-under 359, which left her in a tie for 23rd. Only the top 20 finishers earn full LPGA status for the upcoming season, and Sheils’s result left her one shot out of a playoff for the final spot.

But Sheils wasn’t asking for anyone’s sympathy after the round. In an Instagram post, she wrote about the challenges of the week.

After two rounds when I was +6 and in 104th place, I first broke down in tears… and then I dusted myself off,” she wrote. Sheils shot 71-68-70 over the final three rounds, rallying to earn conditional status, even though she fell just short of her ultimate goal. 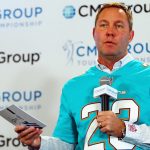 You may also like LPGA will overhaul Q-school with new Q Series, following PGA Tour’s lead

The good news for Sheils is that her conditional status will likely earn her a number of starts this coming year. In the 2017 season, she got 13 starts on tour, making five cuts and earning $30,699.

I will make the most of my LPGA opportunities ahead,” Sheils wrote. You can read the full post below: