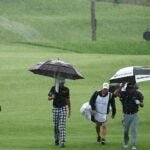 Ian Poulter's group trudge through the rain during Thursday's first round.

Mother Nature is having her way with the Players Championship this week at TPC Sawgrass, and clearly she’s not about to let up.

After thunderstorms washed out much of the first round from taking place Thursday, the forecast is not improving on Day 2 in Ponte Vedra Beach, Fla. It has left players in limbo for over 24 hours now. When will I tee off? Will I finish 18 holes? What about my second round?

Max Homa took to Twitter to share his thoughts mid-storm Thursday. “I’ll be shooting 0 today #bogeyfree,” he tweeted. Oh, but Max! The organizers of this event had different plans for you. Much as the pro would have loved to not tee it up at all Thursday, he was trotted out shortly after 6 p.m. local time to start his round. He parred the first, birdied the second, and then play was suspended for the day.

Jon Rahm had a different fate. He was two under through seven holes when the horn first blew Thursday. He marked his ball some 41 feet away from the hole on the famed 17th green and took a 4-hour break. Another .45 inches of rain fell on the already-soaked course while pros sat around, watched TV, played on their phones, etc. When play resumed again, Rahm bogeyed two of his first three holes.

“It was like two rounds I played today,” he said to reporters immediately after the round.

As for his “second” round, he was at least able to birdie 7 and 9 to finish the wacky day three under. When asked about his strong finish and what it meant for Friday, he answered in the way a lot of pros did: “First off, I don’t even know if I’m going to play tomorrow.” He’s probably right.

While Rahm was able to easily finish his round in time, not everyone had as casual a close to their evenings. With darkness setting upon Sawgrass, multiple groups raced to finish Thursday in order to sleep in Friday morning (and potentially not play at all until Saturday). Ian Poulter showed off his speed and was successful in doing so.

Can you blame him? The iris on the cameras makes most action shots seem much brighter than they really are in person. But even so, players played until they basically couldn’t see anymore. Anything to avoid waking up early Friday. Poulter even seemed to play better, reaching the 17th tee at two over before tossing in a dart for a birdie, and then nearly chipping in on 18 for another.

The brutal reality of start-and-stop golf is unfortunately going to define this entire Players Championship, because Mother Nature is not done yet. More thunderstorms (seemingly the only bad weather east of the Mississippi) are expected to hit the area Friday morning. Rahm will be sleeping in. Round 1’s afternoon slate will not be. But hey, they might get a mid-day nap in!