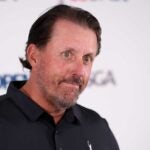 Phil Mickelson at his press conference Monday at the U.S. Open.

Phil Mickelson has been asked hard questions for a week now, following his return from a four-month hiatus from the public eye. But perhaps the most difficult question came Monday at the U.S. Open.

Mickelson and his fellow PGA Tour players who signed on to play with the Saudi-financed LIV Golf series were sent a letter from a 9/11 survivors and families group, 9/11 Families United, criticizing their decision to play in events that are backed by Saudi Arabia. The letter — which was written by Terry Strada, whose husband died in the 9/11 attacks — said that “Osama bin Laden and 15 of the 19 September 11 hijackers were Saudis. It was the Saudis who cultivated and spread the evil, hate-filled Islamist ideology that inspired the violent jihadists to carry out the deadly 9/11 attacks. … Yet these are your partners, and much to our disappointment, you appear pleased to be in business with them.”

On Monday, Mickelson was asked how he would explain to those families his decision to join LIV Golf.

The LIV Golf series was launched and is funded by the Public Investment Fund of the Saudi Arabian government, and has recruited brand-name players with huge guaranteed payments. As a result of playing, Mickelson and 16 other pros were suspended by the PGA Tour. Mickelson was asked about Saudi Arabia’s human-rights record last week at the first LIV event in England, but not until Monday, in Brookline, was he asked about the connections between Saudi Arabia and 9/11.

“I don’t condone human rights violations at all,” Mickelson said last week. “Nobody here does, throughout the world. I’m certainly aware of what has happened with (slain Washington Post reporter) Jamal Khashoggi, and I think it’s terrible.

“I’ve also seen the good that the game of golf has done throughout history, and I believe that LIV Golf is going to do a lot of good for the game as well. And I’m excited about this opportunity. That’s why I’m here.”

On the CBS telecast from the Canadian Open Sunday, Jim Nantz asked PGA Tour Jay Monahan about the criticism from the 9/11 group. Monahan, in part, said, “I would ask any player who has left [the PGA Tour] or any player who would ever consider leaving, ‘Have you ever had to apologize for being a member of the PGA Tour?'”

Critics believe that the LIV league is a form of “sportswashing,” or an attempt by Saudi Arabia to launder its reputation through sports. The letter sent to LIV competitors addressed that notion:

“Given Saudi Arabia’s role in the death of our loved ones and those injured on 9/11 — your fellow Americans — we are angered that you are so willing to help the Saudis cover up this history in their request for ‘respectability.’”

Later in Mickelson’s Monday press conference, he was another question about the 9/11 group’s response: Would you write to the surviving families that wrote you, or would you rather speak to them?

Mickelson delivered much the same answer.

Strada was not impressed. Just a few hours after Mickelson’s comments were made public, 9/11 Families United released a statement of their own, with comment from Strada.

“Phil knows exactly what he’s doing, and he and his fellow LIV golfers should be ashamed,” Strada said. “They are helping the Saudi regime ‘sportswash’ their reputation in return for tens of millions of dollars, at the very same time our government is rolling out more damning evidence of Saudi culpability in the 9/11 attacks. As the PGA Tour commissioner said Sunday ‘you’d have to be living under a rock’ to not understand the implications of involving yourself with the Saudis.”