77 players made the cut Friday by shooting five over or better, and plenty of big names did not make the weekend. The biggest surprise may have been Phil Mickelson, who had not missed a cut all year long, but shot 73-77 to miss by five strokes. Mickelson was joined in missing the weekend by fellow American Patrick Reed, who struggled to a score of eight over with just two birdies. Worse than both Reed and Mickelson was former Open champion Louis Oosthuizen, who opened with a 78 and made just two birdies himself, finishing 12 over. 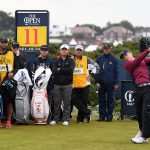 Other notables to miss the cut were: