Phil Mickelson experimented with putting with the flagstick in and also got a chance to tryout the new drop rule on Friday at the Desert Classic.

And how is the transition to the new rules going so far?

“I feel uncomfortable right now because I don’t know them well enough,” Mickelson said on Friday after his four-under 68.

After shooting 60 at La Quinta Country Club on Thursday, Mickelson’s 68 on PGA West’s Nicklaus Tournament Course pushed him to 16 under, good enough for a two-shot lead heading into the weekend.

Pro golfers across all tours have been trying to adapt to the revised Rules of Golf that were released at the beginning of the year. This week is Mickelson’s first start with the new rules in place.

On the par-5 4th on Friday, Mickelson left the pin in for a long eagle putt and then kept it in for his birdie try, which he also missed. He was asked about it afterward.

“It felt very uncomfortable,” he said. “I kind of eased into it thinking that if I hit it too hard it might hit the pin and miss, so I don’t think I’ll do that again.”

He also almost messed up the new knee-height drop rule — Jordan Spieth and Henrik Stenson had trouble with this one, too — on the par-4 18th. Taking a drop from the cart path, Mickelson nearly dropped from shoulder length before he corrected his near-error. 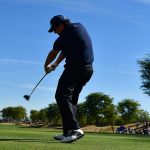 You may also like Phil Mickelson leads, and everything else you missed in Round 3 of the Desert Classic

“I’ve been trying to get like a seminar to learn [the rules changes] and I just haven’t had time or a chance to,” he said. “So playing this game, not knowing the rules, is an unsettling feeling. Hopefully I’ll figure it out, I’ll be able to get a seminar and learn them.”

Mickelson is looking for PGA Tour win No. 44 this week. His 43rd came at last year’s World Golf Championships-Mexico Championship.