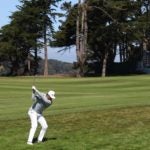 Haotong Li hits from the right rough on the 14th hole at TPC Harding Park on Friday.

Haotong Li’s scorecard was as immaculate as the fairways at TPC Harding Park on Friday. Five birdies. No bogeys. A five-under 65 to give him a two-stroke lead after two rounds at the PGA Championship.

The bad made the good look really good. According to the PGA of America, Li’s 65 tied Scott Piercy, at the 2013 PGA, for the lowest round in a major in the past 20 years with four or fewer fairways hit.

“Yeah, the last couple days I’ve pretty much hit in the right spot,” Li said after his round. “Even if I miss the green, I still got a chance to up-and-down and also got a lot of good lies in the rough.”

Undoubtedly, given a machete couldn’t get through some of the rough at Harding Park.

Hours after his round, Li was still on the driving range, grinding away.