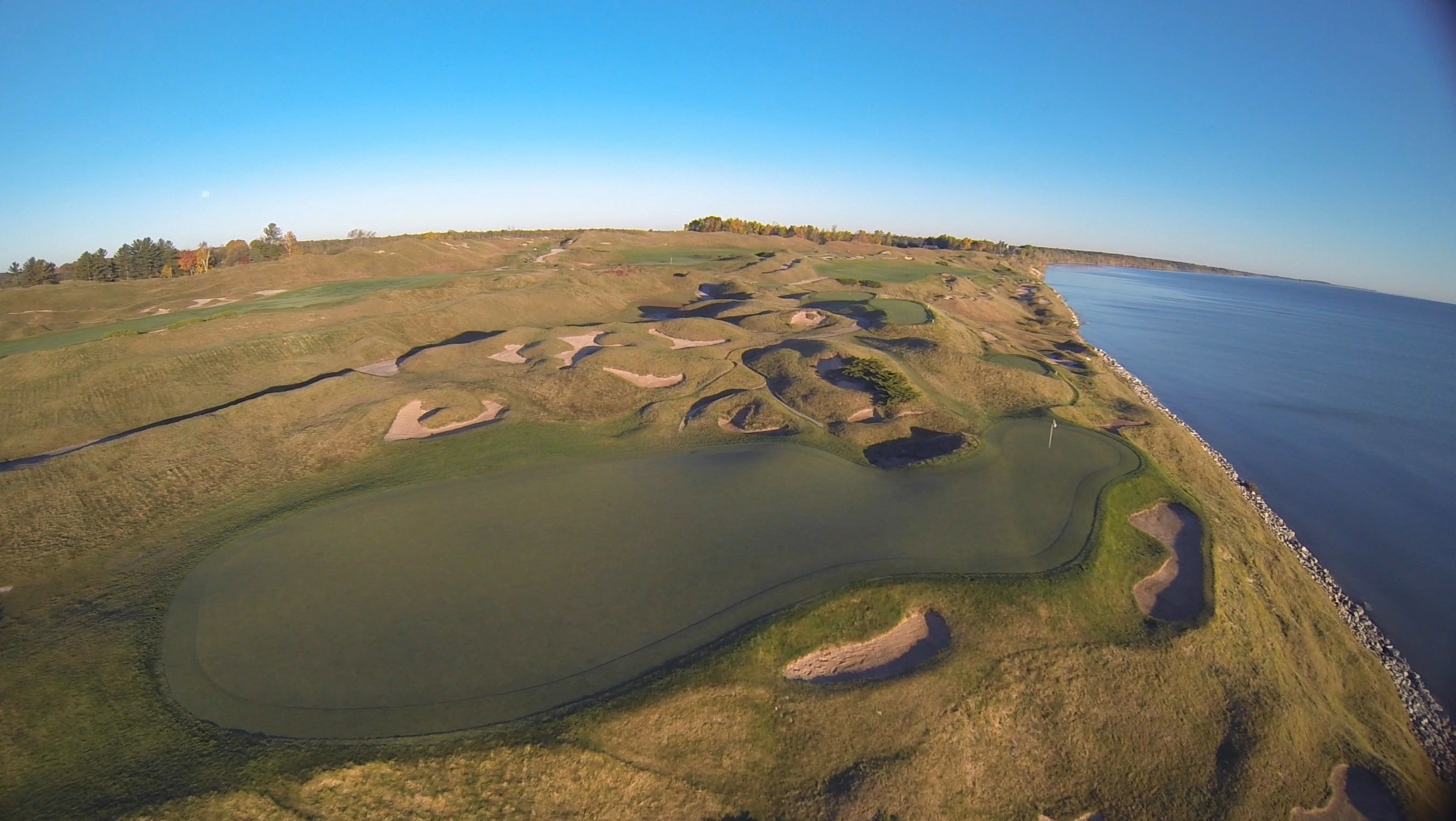 A reader asks, “Is it true that space aliens, and not Pete Dye, designed Whistling Straits?”

Pardon me for chuckling, but I get so many crazy e-mails that I’m caught off guard when someone poses an intelligent question. Pete and Alice Dye, of course, are the architects of record for the Wisconsin clifftop course, which was built by plumbing magnate Herb Kohler. Opened in 1998 and operated by The American Club, a luxury resort, Whistling Straits is a three-time PGA Championship venue (2004, ’10, ’15) and is slated to host the 2020 Ryder Cup.

So my answer is: Maybe.

Let me state at the outset that I’m not a member of the tinfoil-hat brigade. Most of Whistling Straits’s design elements suggest that it is a vintage Pete Dye product — i.e., nasty. The track measures 7,790 yards from the tips and plays to a Dyeabolical course rating of 77.2 and a slope of 152 — numbers comparable to those for his TPC-Sawgrass Stadium course, site of the Players Championship. The Straits has deep pot bunkers similar to those at Dye’s Oak Tree National (1988 PGA) and parallel water exposures resembling those at his Kiawah Island Ocean course, another PGA and Ryder Cup site. There is also the indisputable fact that Dye says he designed Whistling Straits. That counts for something.

But upon closer examination — and here’s where I begin to sound like a Roswell fanatic — the course’s provenance begins to erode. Nowhere on the Straits do you find Dye’s trademark railroad-tie bulkheads, or the tiny greens that make his Harbour Town Golf Links such a challenge for pros playing the RBC Heritage. Instead you have an otherwordly proliferation of bunkers — hundreds and hundreds and hundreds of sandpits, some as small as a child’s sand box, others as broad as a beach. Not only does this make Whistling Straits unique among golf courses; it makes this stretch of lakefront property singular on earth. The New York Times, usually a debunker of extraterrestrial theories, headlined a 2010 story thusly: Feel as if you’re playing on the moon? It must be Whistling Straits.

If the bunkers are bonkers, the dunes are downright dérangée. In 2004, scores of spectators were injured in falls, some requiring ambulance trips to Sheboygan. “The sight of spectators tumbling as if hit by a sniper is a common theme,” wrote Brian Murphy, a San Francisco sports writer. Six years later, golf.com’s Jeff Ritter followed Tiger Woods’s group and reported he had witnessed “three separate wipeouts — one of which was a breathtaking face plant.”

Put on the defensive over the slippery slopes, PGA of America officials insisted that Dye’s dunes, although man-made, were held together by the same marram grass, gray hair-grass and fine fescues as natural dunes. This turned out to be patently false — or, at least, arguable. Having played many rounds on British and Irish links courses without slipping, I skidded twice at the 2010 PGA. Either Whistling Straits top-dresses its dunes with Teflon — a stretch, don’t you think? — or someone, or something, introduced a tractionless hybrid beachgrass to the Wisconsin shoreline. Draw your own conclusions.

There is, of course, a third possibility, familiar to Area 51/government conspiracy enthusiasts. The site, described as farmland when Kohler applied for the necessary permits, was an Army artillery range from 1949 to ’59. (See my doctoral dissertation, Camp Haven: Wisconsin’s Failed Manhattan Project.) That explains all the craters on the property, which Dye had only to fill with sand to achieve the current look.

Not to belabor the point, but the Army created a no-fly zone over Camp Haven and a no-sail zone on Lake Michigan. Even so, word got out about the “flying robots” — four-cylinder prototypes of today’s remotely guided drones — several of which crashed offshore and were recovered by scuba divers. After closing the camp, the government sold the property to Wisconsin Power and Light, which announced plans for—wait for it—a nuclear power plant.

WP&L never built that plant, but you don’t have to be a nuclear scientist to see how such a site could devolve into a mutant Pete Dye golf course. Whistling Straits, with its thousand-plus sand pustules and frictionless dunes, is right out of a science-fiction novel. Or a suppressed government white paper.

Thanks for the question, reader. Next time we’ll tackle the rumors about Jordan Spieth—human or golf droid?