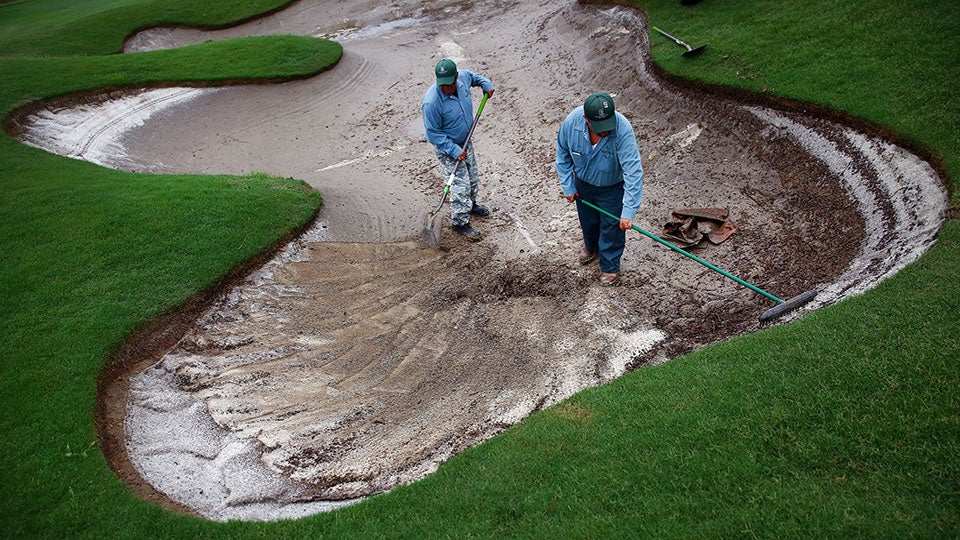 Grounds crew staff work to repair a flooded bunker on the 17th hole after heavy rains delayed Round Two of the AT&T Byron Nelson at the TPC Four Seasons Resort Las Colinas on May 29, 2015 in Irving, Texas.
2015 Getty Images

I was recently waiting to board my flight at Phoenix Sky Harbor airport when I saw a family thank a U.S. Marine for his service. It fills me with patriotic pride when people pay respect to soldiers, police officers and firefighters for the important jobs they do. This issue celebrates Jordan Spieth as GOLF’s Player of the Year. That got me thinking about other MVPs who work in the golf industry—those who don’t get the credit they deserve. As we reflect on 2015’s top players, here’s a shout-out to some of the unsung heroes who help bring the Tour into our living rooms every week.

In 2015, savage weather besieged several Tour stops, especially the Zurich Classic in New Orleans, as well as the Crowne Plaza Invitational and the AT&T Byron Nelson, both near Dallas/Ft. Worth. At the Nelson, the massive storms and flooding were so bad that I thought Sunday would be a washout, but thanks to the tremendous work of the superintendents and their crews, we finished on Sunday at each of those events. Every week, a stellar staff prepares the course for play, no matter how bad the weather gets. Consider this a thank-you note to those men and women for their efforts.

How many volunteers does it take to run a PGA Tour event? Thousands. That’s not a punch line, it’s the truth. Without these generous people, the Tour would simply cease to be. Not only are they unpaid, but they cover their own expenses—even the cost of their own uniforms. It’s also worth noting that, if volunteers were paid minimum wage for their time, millions of dollars that the Tour gives to charities would instead go to event-management staff payroll. And volunteer assignments are not always glamorous. For every lucky soul who gets to be a marshal on the 18th hole, many more are, say, directing traffic in hot, dusty parking lots literally miles from those emerald fairways. The Tour is successful in large part because of their efforts. It’s a thankless job, so to these volunteers, I simply say, “Thank you!”

These experts (along with their counterparts on the European Tour) know the Rules of Golf as well as just about anyone, but they do a lot more than simply enforce the game’s bylaws. They’re often up at 4:00 a.m. to set hole locations, work on pairings and schedule tee times, all so that the field is able to finish mere minutes before the end of TV coverage. When the USGA and R&A weigh future rules changes (along with their potential consequences), they’ll be missing out on a wealth of valuable insight if they don’t sit down and talk with the Tour rules team. These learned people know what rules need to be modified to speed up play. And they, along with the other unheralded difference makers I’ve mentioned, bring new meaning to the phrase “for the good of the game.” It’s my honor to work among them.