Patrick Reed’s win quieted the noise, but for how long is anyone’s guess 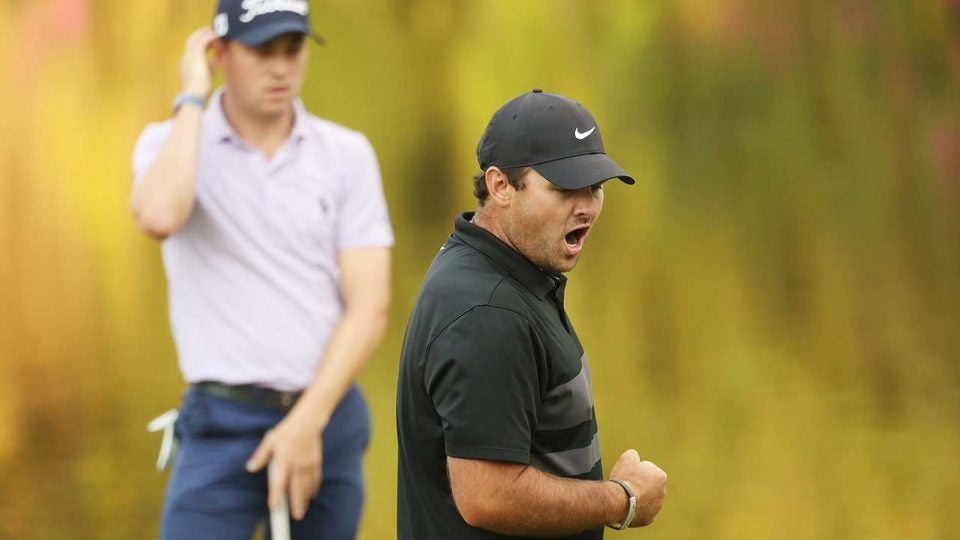 Patrick Reed made three straight birdies down the stretch to jump ahead of Bryson DeChambeau.
Getty Images

Patrick Reed had two putts from 34 feet to silence the noise in his trademark fashion.

As Bryson DeChambeau watched from the clubhouse — not long removed from stewing on the putting green after a bogey-par finish — Reed nestled his first putt to inside three feet, marked and then cleaned up for a one-stroke victory at the WGC-Mexico Championship.

An old ESPN story once quoted a source as saying it was “the death of karma” after Reed beat Harris English in the final match to help Augusta State win the 2011 NCAA Championship. But what about now, after swing coach and former CBS broadcaster Peter Kostis called Reed a serial rules-breaker? Days later Reed won for the eighth time in his PGA Tour career.

In his winner’s press conference, Reed was asked if he likes when he feels as if the world is against him.

Few unfortunate things happen on sun-splashed Fridays in the Bahamas, but that’s where this latest Reed drama was born. It was there in early December when Reed was penalized for improving his lie from a waste bunker after he swiped away sand from behind his ball with two quick practice swings. After Tour officials showed Reed a replay, he accepted the penalty but added, “I think with a different camera angle they would have realized that … it was not improving the lie because it was far enough away from the golf ball.”

Much has happened since that day. Australian Cameron Smith called him out, and at the Presidents Cup Oz fans showered him with boos. Reed was agitated enough that he made a shoveling gesture toward the crowd. On the final day, he had to use a fill-in caddie after his caddie (also his brother in-law) was banned for an altercation with a heckling fan.

The bad blood didn’t stay Down Under. Reed was called a cheater as he stood over a crucial putt at the Sentry Tournament of Champions a few weeks later and just last week Brooks Koepka made a joke at his expense on a SiriusXM interview, which would have gotten even more attention if not for Kostis’ unfiltered thoughts on No Laying Up’s podcast.

Reed downplayed the distractions all week.

“The biggest thing for me is any time you go to the golf course, pop in my headphones, get to work, and just really get in tune with every golf shot I hit because at the end of the day you can’t listen to what other people are saying, all you can control is what you do,” Reed said on Saturday night, when he was a shot back of 54-hole leader Justin Thomas. “For me, I just go out there and try to play the best golf I can, try to improve on and off the golf course each and every day, and if I feel like I’m doing that, then I’m living the right way and I’m working as hard as I need to be working.”

Reed had only two birdies through 14 holes on Sunday, but three straight from Nos. 15-17 gave him the lead. On 17, Reed faced an 18-footer for the outright lead. “It’s hard to get more resilient than Reed,” NBC analyst Paul Azinger said on cue as Reed rolled it in. Reed needed only a bogey to win on the 72nd hole, which is what he made after having to punch out after his drive missed the fairway.

Reed’s win quieted the noise. For how long is anyone’s guess.

On Sunday evening, Reed did a couple of interviews on the 18th green at Club de Golf Chapultepec, including one with Sky Sports’ Wayne “Radar” Riley. Reed appeared upset with one of the questions. As he walked off the green, he looked back at Riley and said, “Way to ask that one.”

Patrick Reed was not pleased with a question from Sky Sports’ Wayne Riley after his win. Not sure exactly what it was but presumably about the controversial week.

“Way to ask that one,” Reed says. pic.twitter.com/zVFVSyUPfe