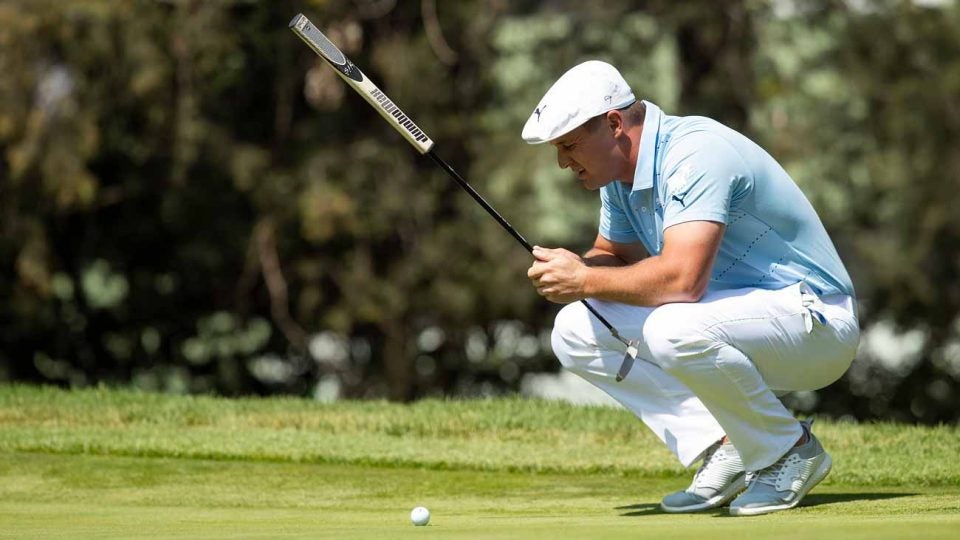 Bryson DeChambeau thinks about a putt during Saturday's third round of the WGC Mexico Championship.
Getty Images

Golf fans (and probably Club de Golf Chapultepec greenskeepers) weren’t real pleased with this one. Bryson DeChambeau’s reaction to a three-putt during Saturday’s third round of the World Golf Championships-Mexico Championship didn’t sit well with many.

He thumped once with his putter on the 14th green in an attempt to smooth out a mark. Frustrated, he did it again. About 10 times in all. The bogey was part of the second-round leader’s even-par 71, dropping him into a tie for fourth entering Sunday’s final round.

Eventually he went to the 15th tee. And golf twitter went off.

“You can actually tap stuff down legally before you putt now,” tweeted fellow pro Lee Westwood at @WestwoodLee, who is tied for 15th. (He’s right. Starting in 2019, Rule 13.1c(2) says a player may repair almost any damage, including spike marks and animal damage but not including natural imperfections, on the putting green.)

“Thoughts on this anyone?…I think they should lock him in the shed with the green keeping staff for a bit!!” tweeted @tonyroche70.

And “Actual video footage of @b_dechambeau returning last evening to finish the job on the 14th green@WGCMexico” tweeted @BettyFSimmons1.

DeChambeau one-putted the green for a birdie on Thursday and two-putted for bogey on Friday. He begins the final round four back of 54-hole leader Justin Thomas. You can follow along here.

You can actually tap stuff down legally before you putt now. https://t.co/TXXwtKwgL1

Thoughts on this anyone?...I think they should lock him in the shed with the green keeping staff for a bit!! pic.twitter.com/hGtyTvinT7